Trending Now
Protecting Patient Data
Market Report: Health Care
How to Find Pandemic Relief with the Help...
Millennial Personal Appearance and the Law
Hacking is Becoming Less Human, More Robotic
Impacting the Workplace Loneliness Epidemic
Ransomware: What It Is, How to Avoid It...
Using Technology to Increase Employment Opportunities for Veterans
How Technology Has Caused a Shift in Marketing...
Out-of-Network Follies with Health Insurance
Biz Report

Elise Tillie, Human Resources Team Lead at Chesapeake-based energy services company Damuth Trane, has been on a mission for several years. Her overall goal is two-pronged: Create an internal apprenticeship program that will create “homegrown” HVAC technicians and challenge other local businesses to do the same.

“In 2018, we were able to become a state registered and approved apprenticeship company through the Department of Labor and Industry,” says Tillie. “Prior to that, we really only hired experienced technicians. Then we started seeing this trend where young people were more interested in going to a four-year college or university, coming out with a degree, and going into some planned career from there. Because of that, there weren’t as many people wanting to go into skilled trades. So, we started to ‘grow’ our own in-house.” 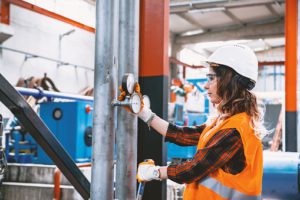 Other large companies, such as Plasser American in Chesapeake and the Newport News Shipyard have also seen the value in nurturing from within to groom skilled trades people through apprenticeship programs that lead to good paying and rewarding jobs.

Using HVAC statistics as a measurement, the idea can be a win/win for employers and employees. In the marketing materials for their apprenticeship program, Damuth Trane makes the case with some statistics that reflect national and regional trends.

“Wages in a number of the top occupations for apprenticeships were well above the $38,640 median annual wage in all occupations in 2018,” notes an article published in 2019 by Career Outlook on the U.S. Bureau of Labor Statistics website. The same article projects employment in the sector to grow “at least as fast as the average for all occupations—if not faster—from 2018 to 2028.”

Particularly when considered against a current average four-year college debt of approximately $30,000 for students in Virginia, it’s not difficult to see the potential appeal of apprenticeship programs for recent high school graduates as well as career changers. 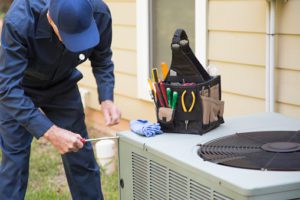 “I’d like other businesses to also start thinking about how we can all focus on our youth, or transitioning military, or people who just want to make a career change, and make it a possibility,” says Tillie. “How can we allow people to grow, and learn, and be employed while doing it? People shouldn’t have to step out of a career and go all the way back down to the bottom to be able to rebuild themselves.”

One example, Tillie points out, was a member of Damuth Trane’s first apprenticeship class. A man in his 40s or 50s, he had been a chef for most of his life and no longer wanted to pursue that as a career because he wanted more time with his family. He transitioned over to becoming an HVAC apprentice.

“That was such a huge life change for him,” say Tillie. “But [at Damuth] he found a company that he knew would support him and would make his transition into a new career as smooth as possible.”