Trending Now
From Livable to Luxurious
Protecting Patient Data
Market Report: Health Care
How to Find Pandemic Relief with the Help...
Millennial Personal Appearance and the Law
Hacking is Becoming Less Human, More Robotic
Impacting the Workplace Loneliness Epidemic
Ransomware: What It Is, How to Avoid It...
Using Technology to Increase Employment Opportunities for Veterans
How Technology Has Caused a Shift in Marketing...
Beyond The BizBiz Report

Businesses Staying Afloat: The Big and Small of It

As Bob McKenna, president/CEO of Virginia Peninsula Chamber of Commerce, looks out his office window, he likes what he sees: Lots of traffic, mid-day on 64.

Fall’s here, and he’s hoping for the best in the fourth quarter, the three months that make or break some businesses.

“It’ll depend on if there is a real surge [in COVID cases],” McKenna cautions.

Plus a balance of approaches—for both consumers and businesses.

For consumers, McKenna might say think small and big.

“We’re going to keep encouraging people to buy local and to shop local,” he shares.

Yet, “local” is relative for him.

“When I see ‘buy local’ on Facebook, I want to post about the big boxes, too. I mean they employ people who are Little League coaches and who are on school boards and who are in the PTA,” he says. “So to me, it’s all local.”

Support everybody, McKenna encourages, while also noting that big box stores did do OK in the early pandemic days, because they weren’t required to close.

For the businesses themselves: Be courageous, yet prudent.

Gutsy moves were made by Indulge Bakery and Bistro in Hilton Village. McKenna praises owner Michele Smith, who hustled to offer curbside service, a food truck and more catering from the start of the pandemic. Kudos also to other risk-takers such as the owners of restaurant Si Senor!. They opened in March 2020 in Newport News and are thriving. Mckenna’s there every Wednesday.

But while retail owners need to have guts, they should stop short of gambling.

“We don’t do things that are unnecessarily risky,” McKenna says, “but we do have to understand that life is all about taking some risks, and we have to keep moving forward.”

Not an easy balance—but has anything been easy about the last year and a half?

Take hope, consumers and business leaders, that the free market is ultimately working, McKenna says. Last year, politicians wondered how much tax revenue would evaporate and how many government-funded public services would vanish as a result. In McKenna’s eyes, it’s all going to be OK, thanks in part to fast, flexible policy changes.

“We deregulated a little bit [such as allowing restaurants to sell to-go alcoholic drinks] to ensure the money was still coming in to fund public services,” McKenna says. “Allowing the free market to work became very important. And it’s very important moving forward into recovery.”

The culprits causing the decrease in hope:

“The results are a confirmation of what we have been hearing from our small businesses,” Sibert notes. “Retailers who have been able to pivot their operations …have been the most successful.”

There’s not much more local retailers can try. It’s up to consumers to push them over the 2021 finish line.

“Retailers are doing everything in their power to keep their businesses operating and their associates employed,” Sibert says. “They just need the customers to support them and understand what they are facing, now and in the future.”

Why would anyone purchase big-box retail property, especially during a pandemic—when concern and social distancing recommendations force our fingers to our keyboards even more frequently to further fuel Amazon’s world domination?

“While the retail sector is certainly evolving,” he acknowledges, “high-volume, high-foot traffic neighborhood centers have proven to continue to work for us.”

In August, his company purchased Greenbrier Square in Chesapeake for $36.5 million. Its occupancy: 95.4% (They also procured Overlook Village, 100% occupied, in Asheville, North Carolina.)

Popular stores HomeGoods, Dick’s Sporting Goods, Field & Stream, and Five Below made for a nice mix of stores at Greenbrier Square. The crown jewels of the deal:

However, while this purchase may be wise, don’t interpret the acquisition as a local retail-holding trend.

Haddad shares that a remixing of assets is coming for his company:

“As of quarter two 2021, retail holdings make up 45% of our portfolio,” he says, “with a future goal of 38%. This does not necessarily mean that we’ll be selling retail assets, just that we’ll be expanding other asset areas.”

Local Retailer: Looking to Beat the Odds with Beer

“We were tired of having to drive all over for our favorite beers,” Severn Ayer, co-owner of the new Earlybird’s Bottle Shop in Poquoson, half jokes. 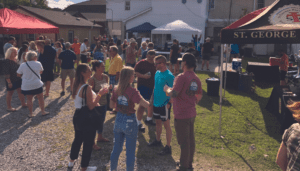 His 1350-square foot craft beer, wine, cider and artisan food store has been opened a few days, and he’s reminiscing about the plan he and best-friend-since-kindergarten Joshua “Earl” Bunch brewed in January 2021.

Besides a reporter, no one has challenged their idea. City officials offered support; their landlord opened an area in the back of their 1947 building for seating and events; friends, family and fellow entrepreneurs gave them a greenlight with greenbacks at the Grand Opening the week before. 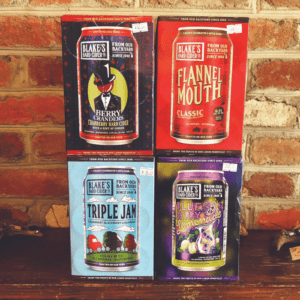 “We’re together every weekend, so you can imagine that our ideas were pretty endless,” Ayer, 32, says of Bunch. “We’re both big craft beer fans, and we thought that there’s a good market for that here. We both thought it was the right time in our lives to take a little leap of faith. We figured, ‘no risk, no reward’.”

Plus: The men worked in customer service, Ayer as an automotive manager for 15 years, Bunch as a manager at Walgreens for more than 10 years. They also know the local market, having been born and raised in Poquoson. While it could look like they dove into a sea of uncertainty, they’re carefully testing the waters. First a few days over a few weeks for a “soft” opening; then a celebratory opening with free tastings and a band; now a store featuring Virginia products; soon-ish co-hosting fundraisers; and when possible, a full ABC license and a room for filling growlers.

“Most people who are coming in say they can’t wait to come back,” Ayer says, “and that’s a really good feeling.”

28% of local retailers who increased their social presence during the pandemic describe it as “most effective” on a scale of least effective, effective and most effective.

27% of local retailers who added delivery label it “most effective.”

43% of local retailers who added e-commerce believe it was “most effective.”

Amongst the doom and gloom, there’s also room for some “boom”: