Trending Now
From Livable to Luxurious
Protecting Patient Data
Market Report: Health Care
How to Find Pandemic Relief with the Help...
Millennial Personal Appearance and the Law
Hacking is Becoming Less Human, More Robotic
Impacting the Workplace Loneliness Epidemic
Ransomware: What It Is, How to Avoid It...
Using Technology to Increase Employment Opportunities for Veterans
How Technology Has Caused a Shift in Marketing...
Biz ReportWhat's On Your Desk?

By Ryan Miller
Photography by Grow

Grow is a digital agency known for masterminding brands—including their own—leaving their imprint with their marketing campaigns for clientele consisting of Google, Nike and Volkswagen among other Fortune 500s. The firm’s ingenuity emanates from their headquarters terraced on historic Granby Street, which is clad in exposed brick and fit with an interior of industrial accents such as suspended light bulbs, trim wooden tabletops and chalkboard art.

Their multipurpose lunchroom is now part of Grow’s latest advent, Enjoy:, a nonprofit that welcomes pop-ups during nights and weekends in the neighboring location of the former Field Guide. Enjoy: encourages a creative commerce between chefs, artists, entrepreneurs and the community while 10 percent of proceeds from these gatherings benefit a nonprofit of their choice. It’s yet another facet of Grow’s disposition for innovation. 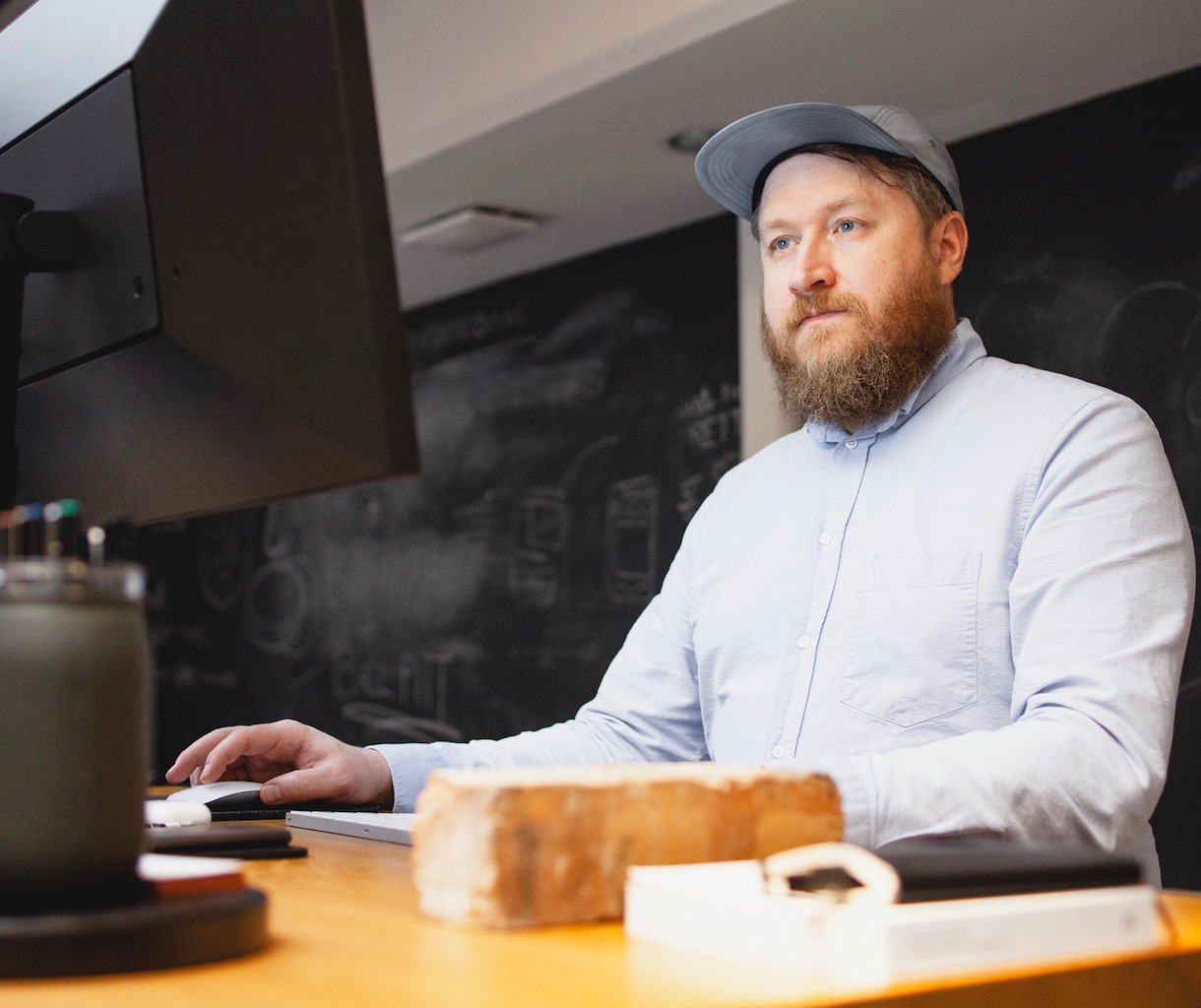 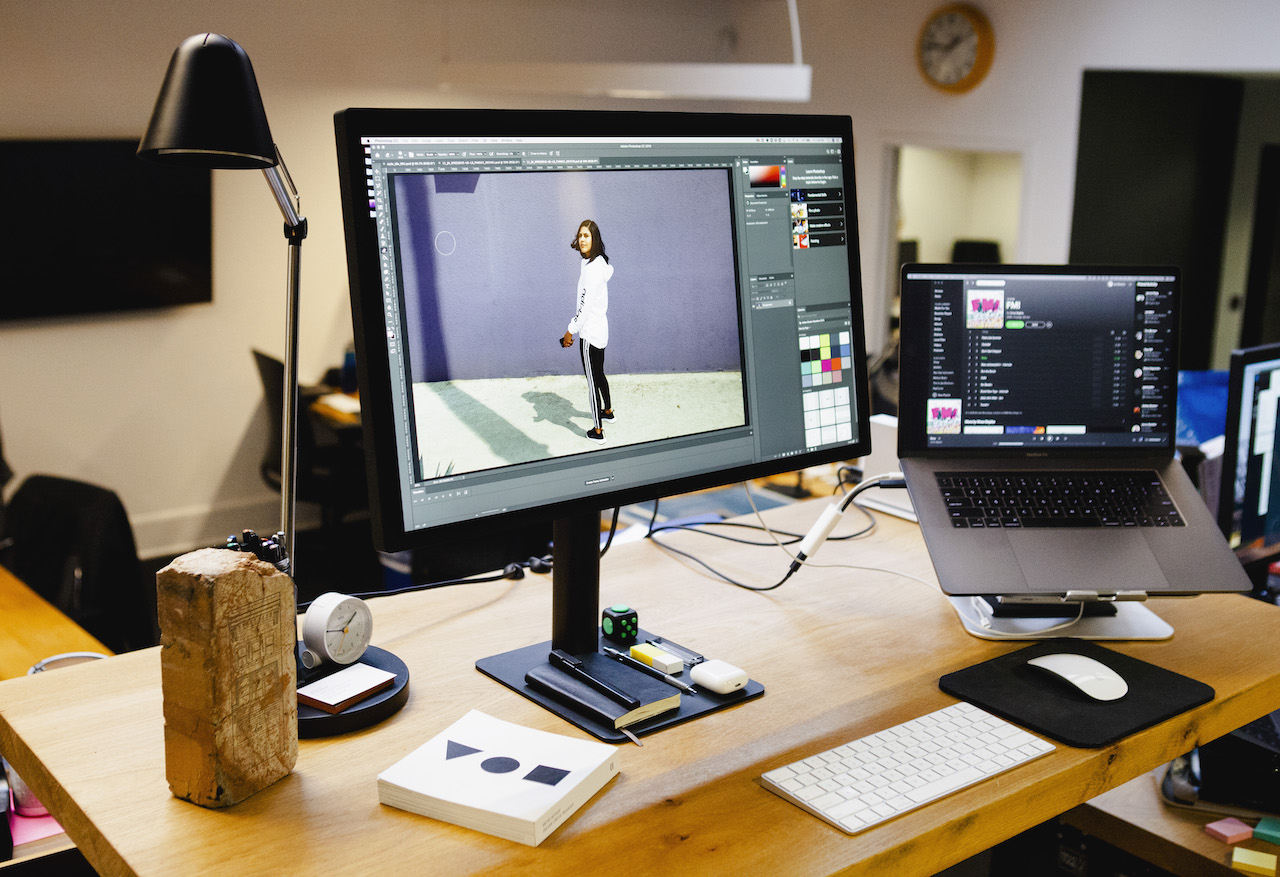 The inviting aesthetic of the workspace postulates interdisciplinary collaboration and conversation between their creatives. Dog beds and commuter bikes are strewn about Grow, where there’s a belief that being in Downtown Norfolk is part of the company’s culture. Desks seem communal yet are representative of each individual—including Design Director Joe Branton. 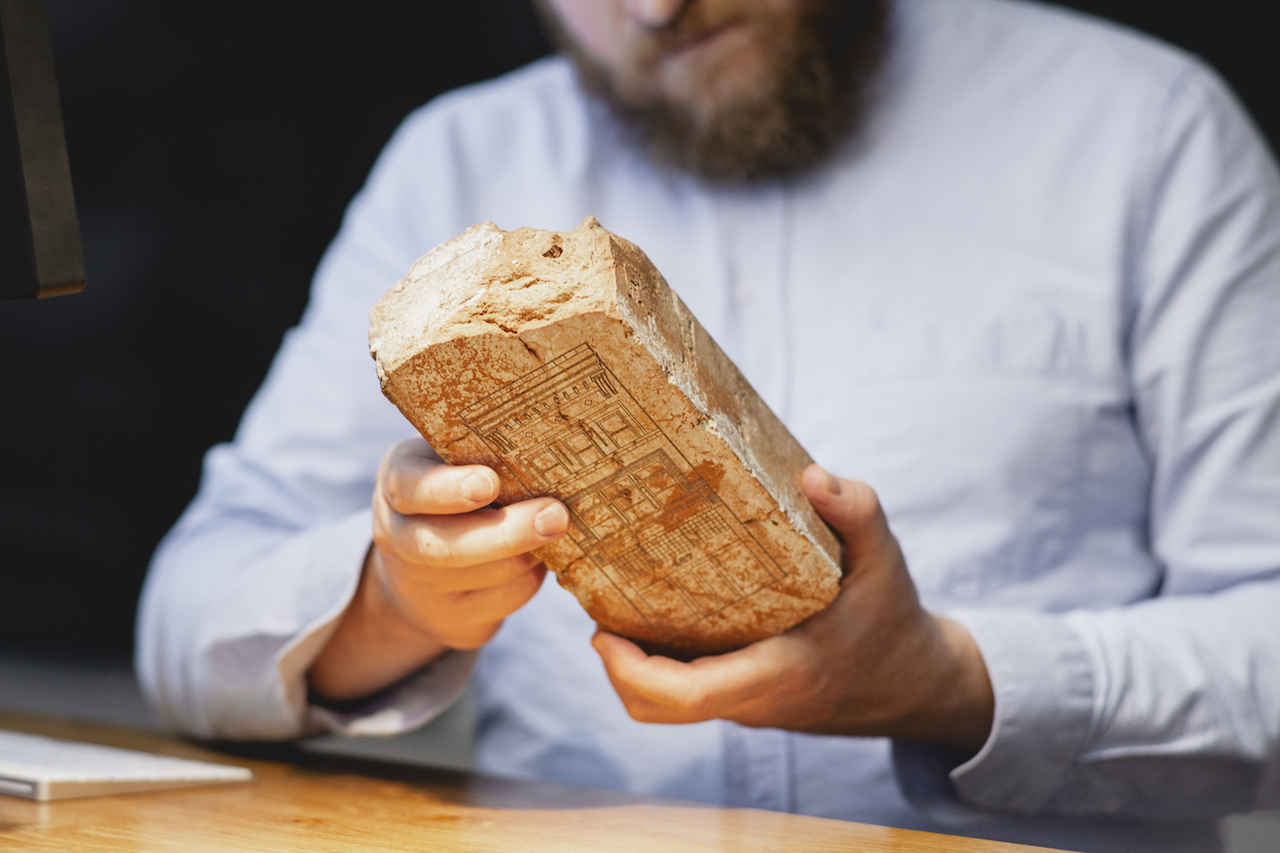 Grow originated out of the spare bedroom of CEO Drew Ungvarsky’s house in 2004, while Branton is considered the company’s first hire. “It was kind of by chance,” the soft-spoken and sophisticated Branton admits of the fortuitous circumstances in which he began his involvement with the aspiring agency. Branton applied to a job posting on a local design forum, and a prompt response on Ungvarsky’s part set up a meeting between the two. Branton was a high-caliber candidate as a designer and would be a surefire hire for the company. A job offer has since led to Branton’s 14-year career with Grow.

“Here we do a 10-year anniversary for employees,” Branton elaborates. “For my 10-year, which I was the first one, Drew had someone pull a brick out of the building and engrave Grow in the front and the logo on the back.” The gesture of gratitude accompanied with a personal message from the CEO indicates Branton’s significant part of the company’s structural integrity. 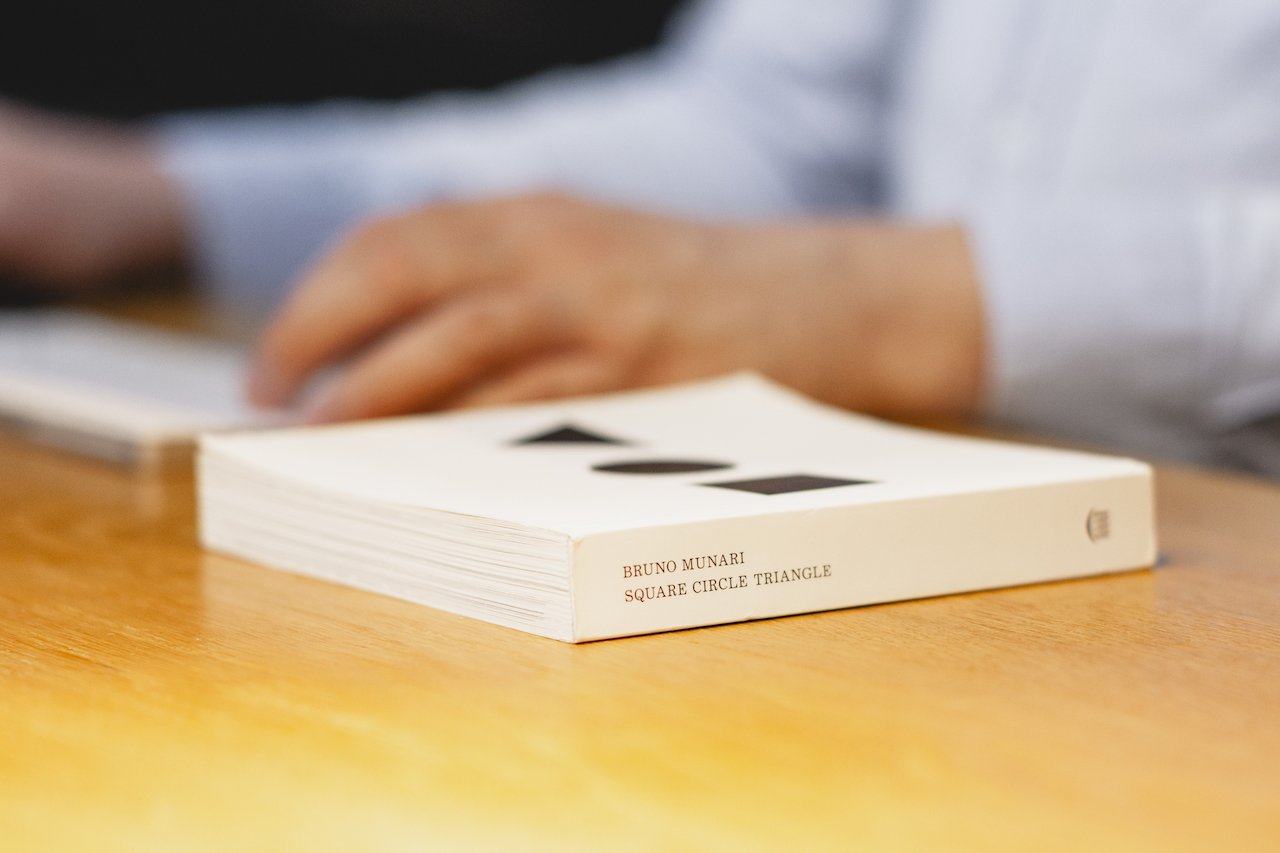 “This is kind of silly, but I keep this on my desk,” Branton admits while flipping open the pages to Square, Circle, Triangle by 20th century Italian graphic designer Bruno Munari. “He did this study on Square, Circle, Triangle, and he did like three different books just studying the form,” he remarks on the rudimentary shapes and candidly adds, “these shapes kind of form everything we see. It’s almost like my security blanket on my desk. When I’m having a hard time focusing on the details, I look at this book, and it’s really simple—square, circle, triangle—but the detail and the thought going into all the studies is just so in depth. It kind of helps me focus.” 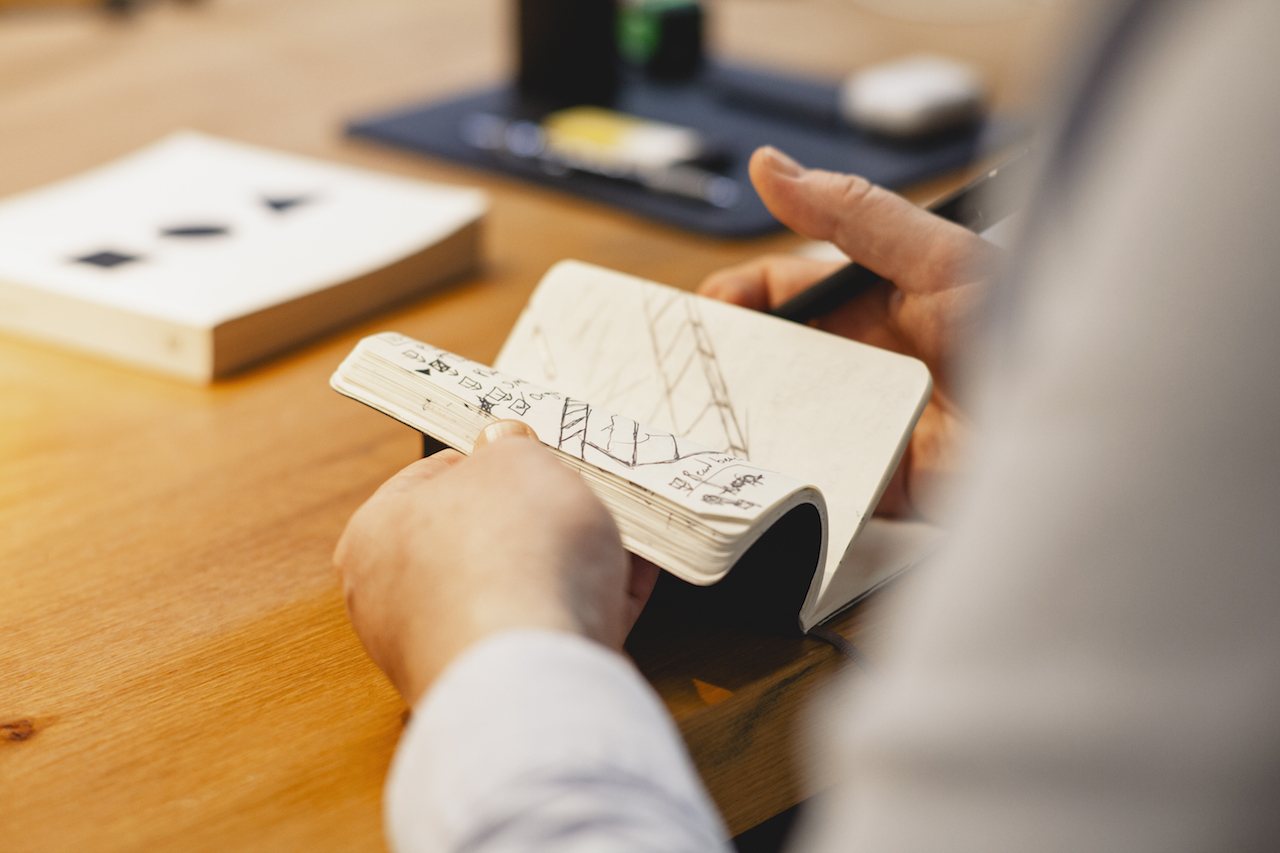 Being the design director at a digital company, Branton is still interactive with the tangible medium of his sketchpad. “It’s my little way of going back to using my hands again.” The markings within the sketchpad serve as an indelible alternative to the computer for his to-do lists and are an effective way to inculcate thoughts for projects. “When you write it down, especially in ink, it’s permanent, so it’s easy to go back and see what I did, and if I don’t finish a task up I’ll wait until the next day and write a new list and it’ll have it in there.” 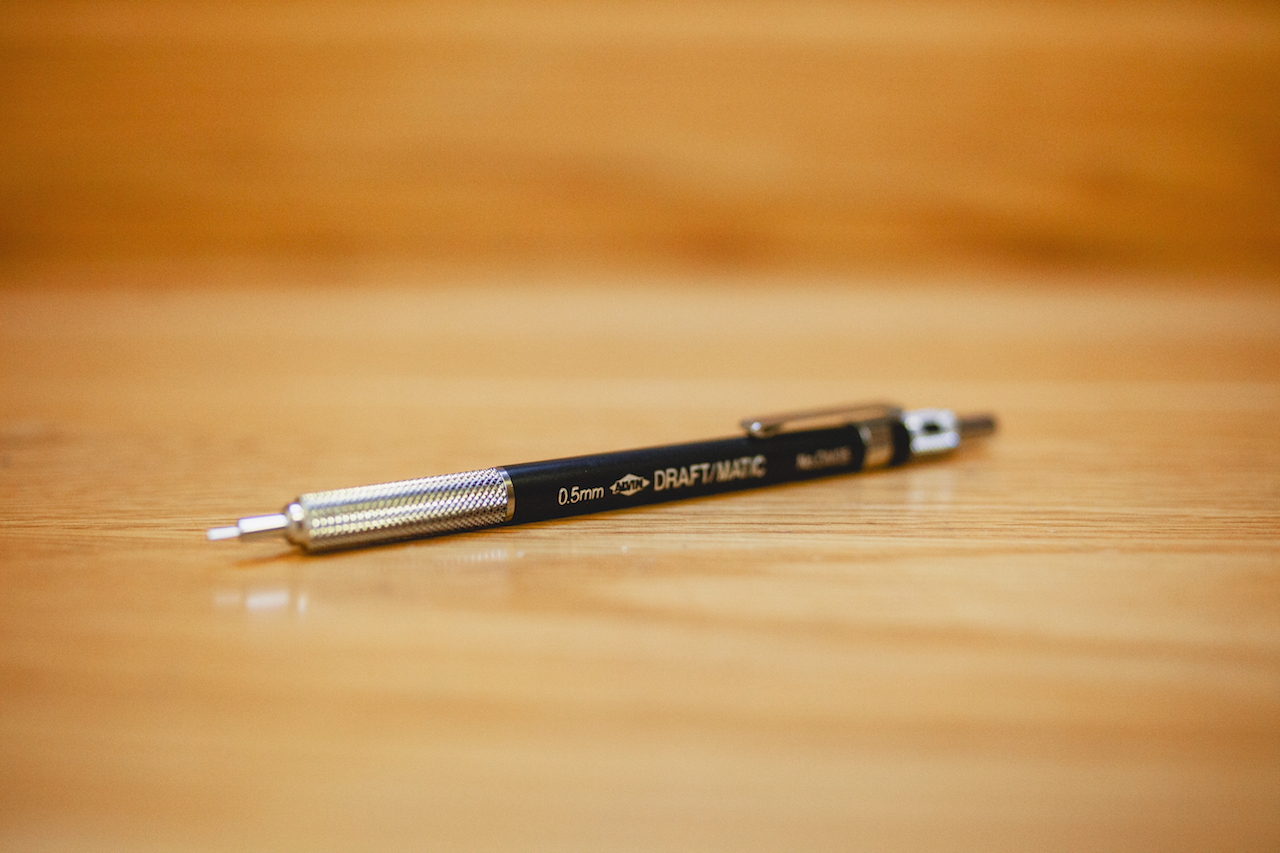 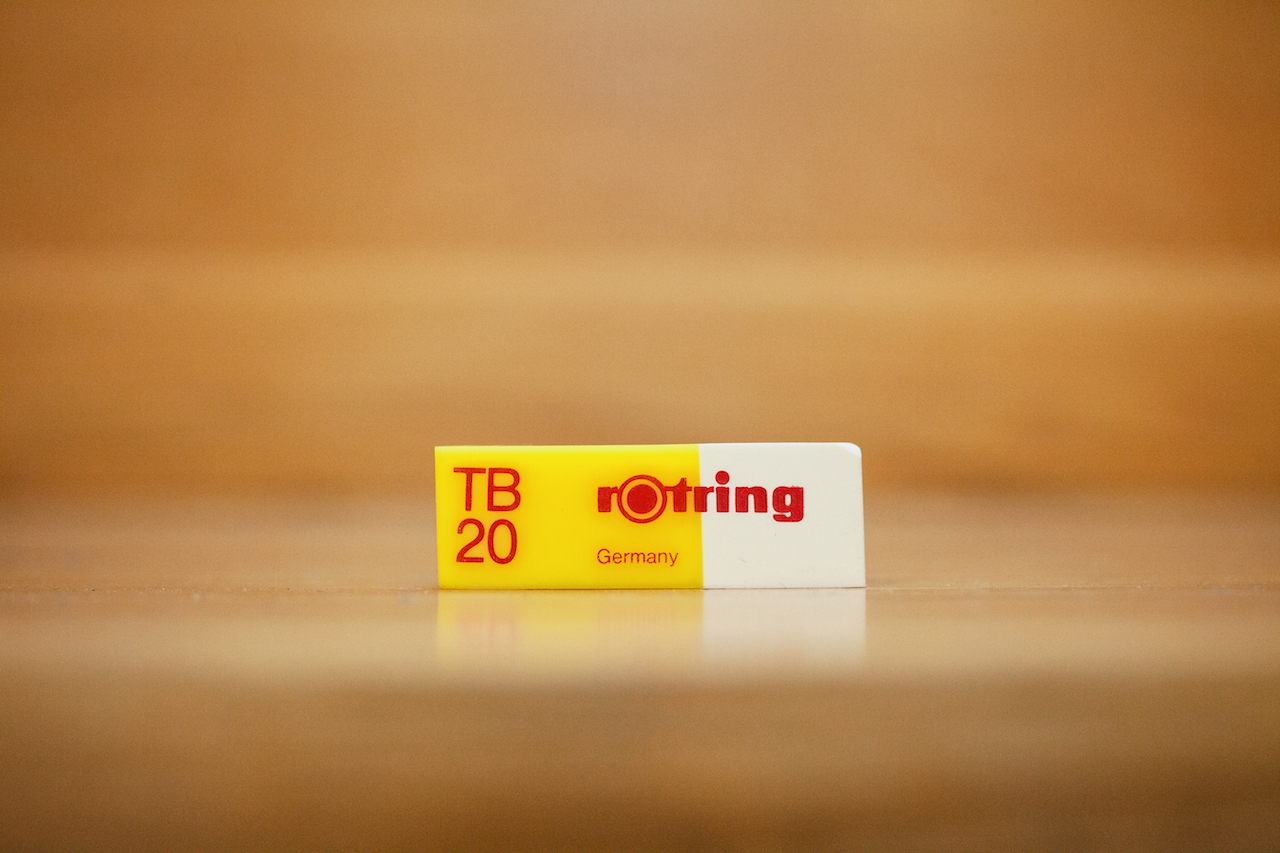 “My mom took architecture design in college, and she dropped out when she got pregnant with me, and so she kind of blames me for that sometimes. She gave me all of her tools,” Branton says, smirking in jest. “If I’m going to design a logo or something, I’ll use a pencil usually, and I’ll draw a grid and sketch it out,” he expounds on his drafting tools for precision. He’s equipped with a rOtring Eraser TB20 to efface etchings from his .5 mm Alvin Draft-Matic Mechanical Pencil. 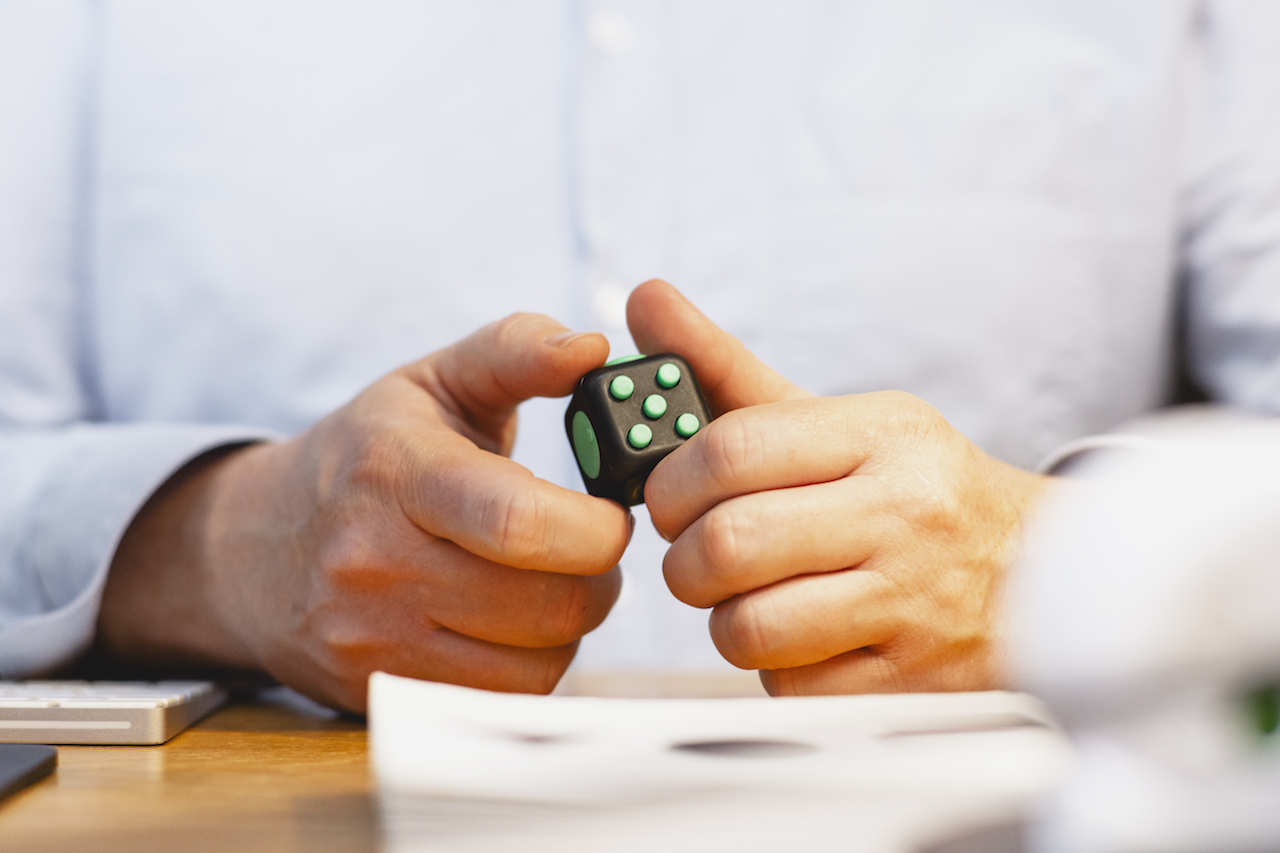 Click, flick, glide and roll. It’s a handheld gadget with a ball, dial, gears and switches for fickle fidgeting handed over to Branton from a colleague. Much like sketching, the device is a passive means beneficial to his thinking.

“I used to have these big, crazy headphones, and it just felt like I was shutting out everything when I put them on, and now that I’m more of a manager I have to be aware of what’s going on around me and talk to people more, so I switched to earbuds.” Branton can be spotted sitting down or standing up at his desk, wearing a flipped-up cap, button-up shirt and a pair of earbuds. “I get inspiration from music. Lately I’ve been listening to a lot of hip hop and rap music. Sometimes it’s a mix, it depends on what I feel like at the time.”