Trending Now
Market Report: Health Care
How to Find Pandemic Relief with the Help...
Millennial Personal Appearance and the Law
Hacking is Becoming Less Human, More Robotic
Impacting the Workplace Loneliness Epidemic
Ransomware: What It Is, How to Avoid It...
Using Technology to Increase Employment Opportunities for Veterans
How Technology Has Caused a Shift in Marketing...
Out-of-Network Follies with Health Insurance
The Case of the Missing Explanation of Benefits
Biz Report

If you’ve ever wondered exactly how those new sneakers in your Amazon Cart appear on your doorstep so predictably a day or two after you hit “Place your order,” at least part of your answer can be found at 1:20 a.m. on any given day at one of the retail giant’s newest regional delivery centers, located on Sewells Point Road in Norfolk.

That’s when the facility’s 10-hour overnight shift begins, and packages start rolling in off trucks arriving from all over the East Coast. The packages are sorted into carts loaded with square bags marked with three-digit numbers organized by the local neighborhoods where they will eventually end up.

“If everything went well that night, nothing is left in the facility at the end of the day,” said Jay Lucado, Amazon Norfolk Delivery Station Site Lead, on a recent media tour of the 165,000 square-foot location. “Then the next day, it’s wash, rinse and repeat. It’s like clockwork. It has to be.” 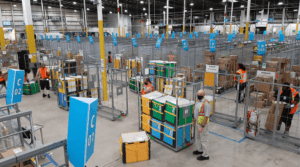 Amazon recently announced it would be hiring for 2,200 seasonal positions in Coastal Virginia to accommodate holiday shopping, offering an average starting pay of $18 per hour and the potential for sign-on bonuses of up to $3,000 for those who remain with the company for at least 90 days.

Amazon has about 3,700 seasonal jobs total in Virginia and 150,000 across the country. The Norfolk delivery center opened in mid-June, and another similar 111,600-square-foot facility on West Mercury Blvd. in Hampton opened in August.

Like other Amazon delivery centers, there are no products stored at these locations. Rather, they are the last stop on the products’ journeys before they reach customers’ homes. Nearby fulfillment and sortation centers are a critical part of the process, too.

By mid-morning on a recent workday, dozens of trucks were lined up inside the Norfolk delivery center building in orderly rows clearly marked on the floor around the facility’s perimeter. Those tell-tale Amazon smiley face boxes were loaded up and the trucks rolled out one by one, line by line. The trucks are owned by five different local trucking companies. 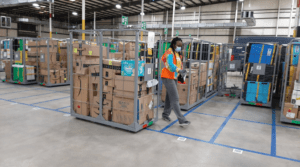 Thousands of products cycle through the building every day, more during the holiday season. This latest delivery station adds to Amazon’s growing footprint in the Coastal Virginia region, which now includes locations in Chesapeake, Suffolk, Norfolk, Hampton and Virginia Beach.

As part of their holiday hiring push, the company has streamlined the application process, said Ricky Derring of Amazon Workforce Staffing. Interested candidates can apply at Amazon.com/apply and those who are hired can be on the job in as little as two weeks. According to Derring, the company does not anticipate the challenges finding adequate staffing that have been experienced across many sectors of the economy in recent months.

“We are not having shortages. We forecast our staffing well in advance,” Derring explained, “So, right now, for example, we are projecting into October, November and December.”

And, of course, the company relies on its competitive wage offers, bonuses and other benefits to attract potential employees in the current worker-friendly labor market.