“People don’t like talking about things that either make them think too much or make them feel too much,” asserts Neisha Himes. “They’d rather talk about the safe things and the surface things and not go too deep.”

That’s why she favors spoken word poetry—a word-based performance art—for bringing awareness to issues that are important to her. “With spoken word, you’re allowed to go as deep as you want,” she says. “Generally spoken word is very raw and transparent. I have yet to meet a spoken word artist who writes with limitations. It allows the rawness, and it allows the brutal honesty.”

Performing under the name Beautiful Dizaster, Himes uses these traits of spoken word to bring to light issues stemming from racism, police brutality, children being taken from their parents at the border, the mistreatment of women and—a topic that she’s personally familiar with—domestic violence.

Himes was involved in an abusive relationship for five years, during which time she suffered a concussion and two broken ribs. At one point, the physical abuse had ceased, but her abuser was still exhibiting control over her. “The insecurities, the name-calling, things like that,” she explains. “Even though I knew it didn’t feel good, I associated that because he stopped putting his hands on me, that meant the abuse had stopped.” He also forced her to give up open mics.

“I stopped performing, not recognizing at the time that it was part of isolation where I would eventually cut off my friends,” she says. When she decided to tell her own story of domestic violence, spoken word seemed the obvious and most powerful method for sharing. “I didn’t know how to come out and say, I’ve been a victim of domestic violence for all these years and nobody knew—none of my friends knew,” she remembers. “So I wrote about it and performed it, and I just remember breaking down, couldn’t even get through it. I think it was a different way for people to hear someone’s truth. It is still, to this day, easier for me to tell my story that way than just sitting down and having a conversation about it.”

Himes says that, at first, she started telling her story because she was angry. “I had all these feelings I didn’t know how to deal with, and I felt like I had to tell my story. There had to be a reason why I went through all of that.” 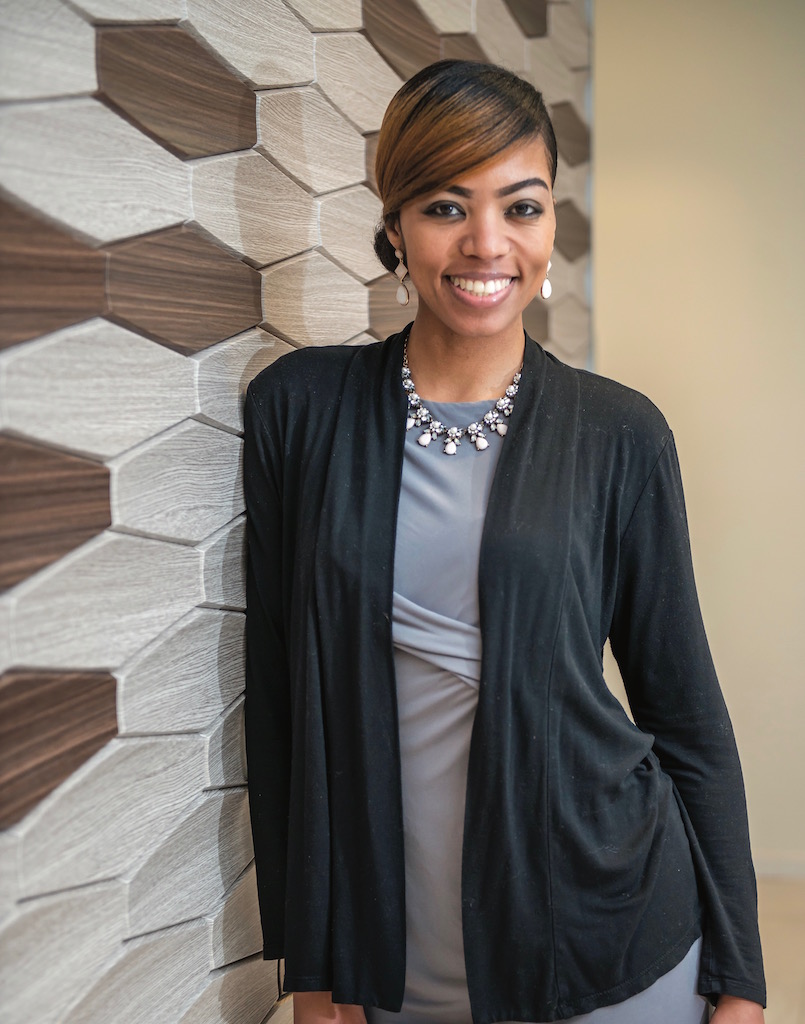 She became determined to make a difference and started seeking employment at organizations or shelters where she could work with domestic violence victims. “I either didn’t have the right degree or it wasn’t paying enough to sustain a family” (Himes has a son and daughter). Still, she knew that she wanted to do more, so she took matters into her own hands by founding the nonprofit G.R.O.W. Foundation in 2016. The foundation (Girls Recognizing Our Worth … One Voice At A Time) was formed to connect individuals and families affected by domestic violence with the resources needed to lead a safe and productive life free from abuse. “I started my own organization with the mindset that no college degree can tell you how to survive domestic violence. Who’s going to tell me I don’t have the qualifications to do it?”

Then in 2017, Himes found a way to help domestic violence victims through her career. She joined the Norfolk Commonwealth Attorney’s Office as a legal secretary and now holds a position as their domestic violence victim/witness advocate. Knowing that she’s making a difference each day in the lives of survivors is fulfilling, although the work can be emotionally draining.

“I think I underestimated how difficult it would be,” she expresses. “Even when I was a legal secretary and seeing pictures from crime scenes, it was triggering. If I saw a picture of a woman or a man with a black eye, which—it’s common—I would have to get up, walk around the office, take a breath.” Now, she says, she has, unfortunately, gotten used to it. “Seeing pictures of black eyes, it’s … I don’t want to say normal, but … it is—as far as in that world. I see it every day. I thought that because I survived it and I’ve been through it, I’m just going to go save everyone. I didn’t realize how real vicarious trauma is and hearing these stories almost every day.”

In addition to founding her own nonprofit to help victims of domestic violence and being a domestic violence victim/witness advocate, Himes volunteers with the Virginia Beach Justice Initiative as a human trafficking victim advocate, doing things like pen pal writing and visiting female inmates or performing spoken word poetry at events geared to human trafficking awareness.

“Essentially I’m involved in domestic violence every day, whether it’s my 9-to-5 or with my organization, so there’s no break, and that is very mentally and emotionally draining at times,” she says. “It’s very rewarding, but I had to learn how to make sure I do self-care, take a break and learn when to take a step back.”

Looking back seven years ago, which was the last time her abuser put his hands on her, to where she is today, Himes has made immense strides in her personal life and has had a major impact on the lives of others. “I didn’t know that I would start an organization,” she says. “I had just hoped to heal myself, and then when I learned it was healing other people, that became my mission to give people a voice and let them know, you can and you will make it, you just have to believe that.”