Wind Power: The Wind Is Blowing Our Way

With a two-turbine pilot program up and running and a nearly $8 billion expansion on the way, Coastal Virginia is poised to become a leader in the offshore wind industry 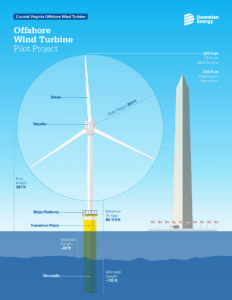 Twenty-seven miles east of Rudee Inlet, two wind turbines tower 600 feet above the water line, taller than the Washington Monument. These silvery white giants are surprisingly quiet up close. You have to concentrate to hear the soft, slow rhythmic swish the bottom blades make as they swoop down toward the Atlantic.

These are not your great grandfather’s scenic windmills dotting the Dutch countryside. Dominion Energy’s sleek wind turbines extend an additional 80 feet to the ocean floor and another 121 feet beneath the ocean floor. Each produces six megawatts (MW) of power; together, enough to power 3,000 homes. The turbines were built by Denmark-based offshore wind company Ørsted.

These two turbines are a pilot program—the advance team for a nearly $8 billion project with 180 turbines, a mile east, with more than 800 feet above the water line. Each of those turbines will produce 14 MW of electricity, says Bonita Harris, Dominion Energy’s eastern region policy director.

Dominion Energy’s parent company, Dominion Energy Inc., is contracting to build the first Jones Act compliant, U.S.-flagged wind turbine installation vessel, the Charybdis, which will first be leased to Ørsted projects in New York and New England and then to the Dominion project, says Kevin Carroll, Coastal Virginia Offshore Wind operations and maintenance manager. The Jones Act requires goods shipped between U.S. ports to be transported on ships that are U.S. flagged—that is built, owned and operated by United States citizens or permanent residents.

The Charybdis will be a game-changer because, without it, turbine components can not be brought directly to the United States from Europe where they are made, says Katharine M. Bond, vice president for public policy and state affairs at Dominion Energy. Components for the first two turbines were shipped to Canada, assembled there and then brought to the offshore site because there was no U.S. flagged vessel, Bond explains.

“Because we didn’t have a Jones Act compliant vessel, we couldn’t bring the components to the Port of Virginia—we had to make trips back and forth from Canada to complete the installation process,” Bond says.

Without such a vessel, the United States—and Coastal Virginia—“foregoes the economic opportunities that are part of the buildout of the offshore wind industry,” Bond says. “This will be a game-changer for the U.S. offshore wind industry. It will also provide opportunities to bring economic development and supply chain development to the United States, so it’s not entirely European.”

The wind farm also will be: 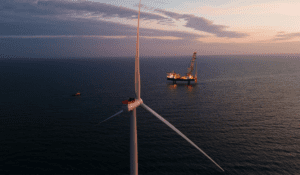 September marked the one-year anniversary of Dominion Energy’s pioneering project, which was 10 years in the making, Harris notes. Earlier this year, Dominion announced plans to invest $37 billion in solar and offshore wind through 2035.

“We are creating the first generation of offshore wind in the country,” says Kevin Carroll, Coastal Virginia Offshore Wind operations and maintenance manager. “We are setting the foundation and the tone of how offshore wind is going to be.”

Focusing on the Environment

The talking points are impressive from an environmental standpoint. When all 180 turbines are online in 2026, they’ll generate 8.8 million MW of wind power per year to the grid, enough energy for 660,000 homes with no carbon emissions, Carroll says.

“As citizens of this planet, we need to take a close look at what we’re doing to our environment,” says Carroll.

The flip side of environmental benefits is concern about how wind farms negatively impact the environment and wildlife, especially birds and bats. At least 500,000, and possibly one million, birds are killed each year by wind turbines, according to Beyond Nuclear International, which analyzed results of several studies in 2012 and adjusted for the higher number of wind farms today. Tens of thousands of bats also die each year because of wind turbines, according to several studies. One advantage of being so far offshore is far fewer birds and bats near the turbines, Carroll says.

“We’re working with a company that has cameras in the project location pointed straight up taking continuous footage,” he says. “If a bird or bat flies across the screen, the camera will pick up. We can also identify what species. We’re not seeing a lot of birds or bats that far offshore. We’re also working with VIMS and engaging in fisheries studies.”

Speaking of fish, a fringe benefit of the project is attracting fish. “Just like with the Chesapeake Bay Bridge-Tunnel, those structures will have marine growth and will attract both small and big fish,” says Carroll. “That will give a boost to the recreational fishing communities.”

One environmental issue still in play: how to recycle the wind turbines once their 25-year lifespan is complete. Wind turbines put into action in the 1990s are now being decommissioned and, often, just buried. Dominion Energy spokeswoman Paula J. Miller says Dominion Energy’s turbines will be recycled.

“The wind industry continues to advance this issue and find solutions for the safe disposal of wind turbine blades,” Miller says. “Using current technology, the vast majority of wind turbine blades can be recovered, reused or repurposed. One company has even developed a method to break down blades and press them into pellets and fiber boards used for flooring and walls. There is a small percentage of a wind turbine blade that cannot be repurposed; the material is landfill-safe and represents a small fraction of overall U.S. municipal solid waste.”

Bringing Jobs to the Region

About 150 full-time Dominion employees will be needed to operate the wind turbines when complete. The Mangum Economics Study, commissioned by the Hampton Roads Alliance, estimates an average of 900 additional jobs annually during construction and 1,100 new jobs annually during operation. Those jobs will include truck drivers, elevator repairmen and drone operators.

“This is going to be a tremendous boost in the job market in the next few years,” Carroll explains.

Dominion is looking to hire military veterans as well as people from diverse population groups.

“We are casting a wide net for talent,” says Carroll, who retired from the Coast Guard after 26 years, with a final posting as Captain of the Port. “We need people who are technically competent, people who are mature, people who have really good character, and understand they are part of a crew. When I was leaving the Coast Guard, I wondered, ‘Where am I going to find the same level of camaraderie and job satisfaction?’ It was an easy transition.”

Because wind is a new industry in the United States, Coastal Virginia Offshore Wind is creating its own training, Carroll says. “We have to come up with apprentices, journeymen and masters. The learning curve is steep. We have to find people who have a tremendous amount of adaptability.”

Since the project is 27 miles offshore, the crews must be well-trained and relatively self-sufficient for health and safety issues, Carroll says.

“If an onshore wind technician has an issue, they call 911. Here, our crews are the first responders for any medical incident. They have to be properly trained to mitigate any risks.”

Training from a variety of resources has included firefighting, survival, working at heights, properly wearing a harness, performing rescues at sea, and maneuvering vessels in close proximity to the turbines.

“They’ll have the basic level of firefighter training. They’ll be able to identify, recognize and potentially fight a fire with resources on hand. They’ll be able to do basic triage of someone’s medical condition. They’ll be able to use bandages, tourniquets and be able to communicate back to shore and determine what level of medical attention someone needs. The biggest part is: we are looking to prevent those incidents.”

The trip from shore to the turbines is 90 minutes. Carroll and his team use that time to talk through risk assessments, check safety gear, review processes and do post-work analysis, he explains.

When all the turbines are in place, teams will work in two-week shifts and stay on a service operation vessel nearby with a gym, entertainment center, WiFi and other amenities. Fatigue is one risk factor; no team member can work more than 12 hours in a consecutive 24-hour period unless another crew is available. The clock starts when they leave their home.

Carroll and his team have set green, yellow and red safety standards for work and maintenance based on the sea state: if waves are below 1.4 meters, that’s green for safe; 1.4 meters to 1.7 meters is yellow where some discussion is needed; seas above 1.8 meters are deemed red/not safe and no work is done. Too much of a good thing—heavy winds—also is a reason to stop work. Light is another safety issue; all work is done in daylight.

Carroll is enthusiastic about the potential of the project. “We are bringing a new industry to the commonwealth of Virginia. We’re putting turbines into the water to bring power ashore. The project will generate jobs and revenue, going back into the economy. We have to approach this industry as working together.”

The History of Harnessing the Wind

Wind power has a long and storied history. By 200 BC, simple wind-powered water pumps were used in China, and windmills with woven-reed blades were grinding grain in Persia and the Middle East. By the 11th century, people in the Middle East were using wind pumps and windmills extensively for food production.

Merchants and the Crusaders later brought wind technology to Europe. The storied part came to play in the 1600s with Cervantes’ creation Don Quixote and his mistaken notion that windmills were giants he must defeat.

The first windmills used for energy were built in 1887 in Scotland and the United States. Wind power became more prominent in the 1970s as renewable energy gained more attention and traction. As the shape changed from the bucolic windmills of the 17th century to more efficient, modern engineering marvels, the preferred term became wind turbines.

Currently, renewable energy makes up 12 percent of the energy consumed in the United States; of that, 26 percent is wind, according to the U.S. Energy Information Administration.

Pros and Cons of Wind Power

How Offshore Wind Is Different

Harnessing offshore wind is more than 2.5 times more expensive than onshore wind, according to the Energy Information Administration. But land-based wind farms generate controversy because they are noisy and ugly; by definition, offshore wind farms are not near where people live and work.

Offshore wind also offers other advantages compared to land-based wind farms, according to the U.S. Office of Energy Efficiency and Renewable Energy.

Dominion Energy submitted its Construction and Operations Plan (COP)to the Bureau of Ocean Energy Management (BOEM) on Dec. 17, 2020. BOEM reviews the COP and then provides Dominion with a Completeness and Sufficiency Determination. Next, BOEM issues a Notice of Intent (NOI) to provide an Environmental Impact Statement for the COP. The Virginia Clean Economy Act includes language designed to contain the cost of the project, which is also subject to regulatory scrutiny from the State Corporation Commission. The General Assembly has determined that the levelized (lifetime) cost of energy from the project should not exceed 1.4 times the cost of a simple cycle gas turbine.

Leona Baker contributed to this story.