Trending Now
From Livable to Luxurious
Protecting Patient Data
Market Report: Health Care
How to Find Pandemic Relief with the Help...
Millennial Personal Appearance and the Law
Hacking is Becoming Less Human, More Robotic
Impacting the Workplace Loneliness Epidemic
Ransomware: What It Is, How to Avoid It...
Using Technology to Increase Employment Opportunities for Veterans
How Technology Has Caused a Shift in Marketing...
Success

Sworn in as mayor of Virginia Beach in November, Robert “Bobby” Dyer won a special election to replace William Sessoms following his resignation last spring and will serve the remainder of Sessoms’ term until December of 2020. Dyer took his oath of office after campaigning for fiscal responsibility and transparency of local government. A New Jersey native, he’s served in the U.S. Marine Corps and earned a bachelor’s degree in physical therapy from Saint Louis University, a master’s degree in public administration at Fairleigh Dickinson University and a doctorate in organizational leadership from Regent University. He is a physical therapist with Encompass Home Health and served as a city councilman for the Centerville District for 14 years before being voted as a mayor of the most populous city in Virginia.

Dyer has taken office in a city that’s eager to appease its potential with its ambitious economic development opportunities. Virginia Beach is thriving in the biomedical and cybersecurity industries, while tech companies anchoring transatlantic subsea cables in the city are promising for digital commerce. There’s also the anticipated completion of projects at Town Center and the Oceanfront, including the new Sports Center and proposed Dome site mixed-used development with a surf park. As mayor, Dyer is keen on invigorating Virginia Beach’s vision for success. 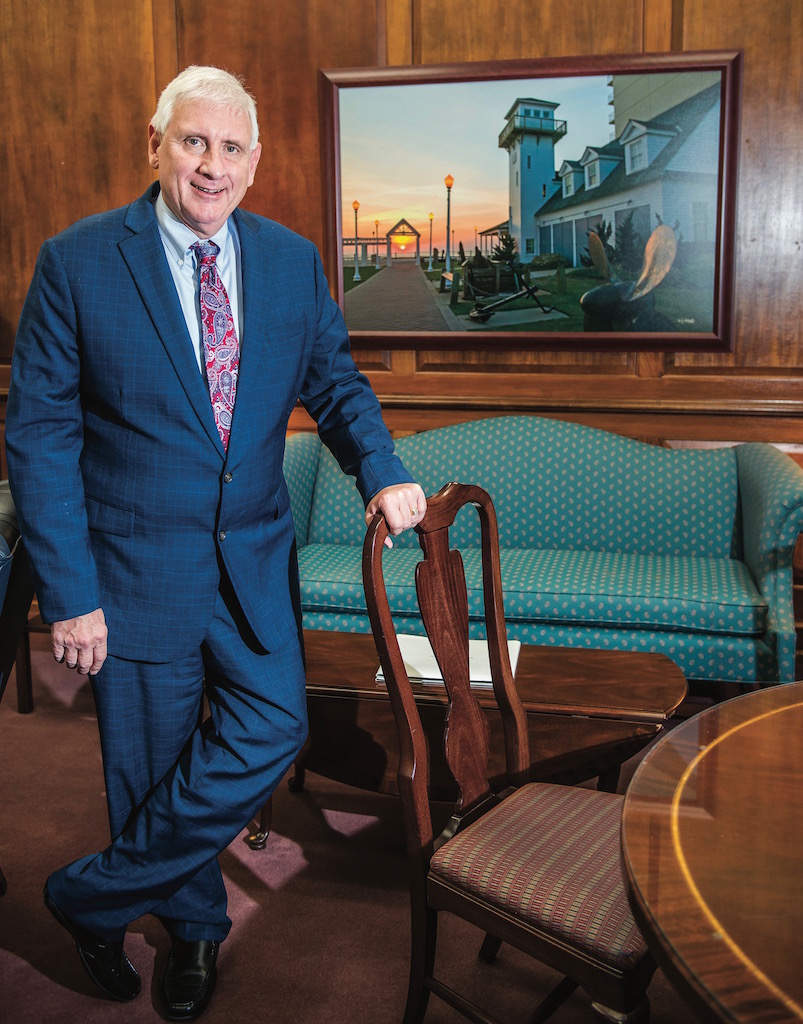 CoVa BIZ: What would you prioritize and rank as your top three economic development opportunities for Virginia Beach?

Bobby Dyer: We have to level the playing field, so any business that wants to do business with Virginia Beach or who is in Virginia Beach and want to expand, the city is going to help them do that. We want them to not only survive, we want businesses to thrive. Going forward we have a tremendous challenge with stormwater through sea level rise. The two biggest economic drivers that we have are our education and public safety. We’ve got to make sure these folks are adequately compensated to keep us a safe city, to keep us a well-educated city. But most of all, to let everyone know that Virginia Beach is open to business and we’re going to help them.

CoVa BIZ: How significant is tourism to our area? Are there any projects that you’d like to see developed to improve tourism and the economy in Virginia Beach?

BD: Without question, tourism is essential. We’re blessed with a natural ocean, but we’ve also got many bodies of water and lakes in the city. We’re really hoping that the Dome site development comes to fruition—that has the potential to be a tremendous game-changer—not only bringing people from outside of Virginia Beach to our Oceanfront but the people that live in Virginia Beach, get them coming back out to the Oceanfront too.

CoVa BIZ: What would you like to see the city do to attract and keep more millennials in our workforce?

BD: We have to encourage the development and recruitment of businesses in those areas where millennials find comfort in finding employment. A lot of millennials go live in Northern Virginia, but I respectfully suggest that we have a quality of life here in Virginia Beach a lot of places don’t have. We’ve got good housing, good schools, we’ve got good public safety, we’re an area where people want to live, but we’ve got to attract those types of businesses down here so they can find gainful employment or put them on a track where they can start a business themselves.

CoVa BIZ: Virginia Beach has demonstrated some success with public/private investment. Do you see this continuing?

BD: The one thing you’ve got to be careful of is that the city doesn’t establish businesses that compete with other existing businesses. We have to be open-minded to any type of business that wants to come here, but once again, we’ve got to realize that we are using the people’s money in terms of taxes, and when we make those decisions we have to be prudent about them but also be very transparent with the public on why we’re conducting business in this way.

CoVa BIZ: In what areas do you see Virginia Beach collaborating with other municipalities in the region for the betterment of all?

BD: It seems that sometimes we have protective moats around each city. Collaboration is a good thing, and we as a region are in the collective boat together, and even though a lot of people may live in Virginia Beach they may work in Norfolk or Chesapeake or Suffolk or Portsmouth. We’ve just got to make sure we’re communicating well, we’re collaborating well. Maybe we can find ways to share certain services and become more effective government. We just have to have open dialogue and communication with the other cities. 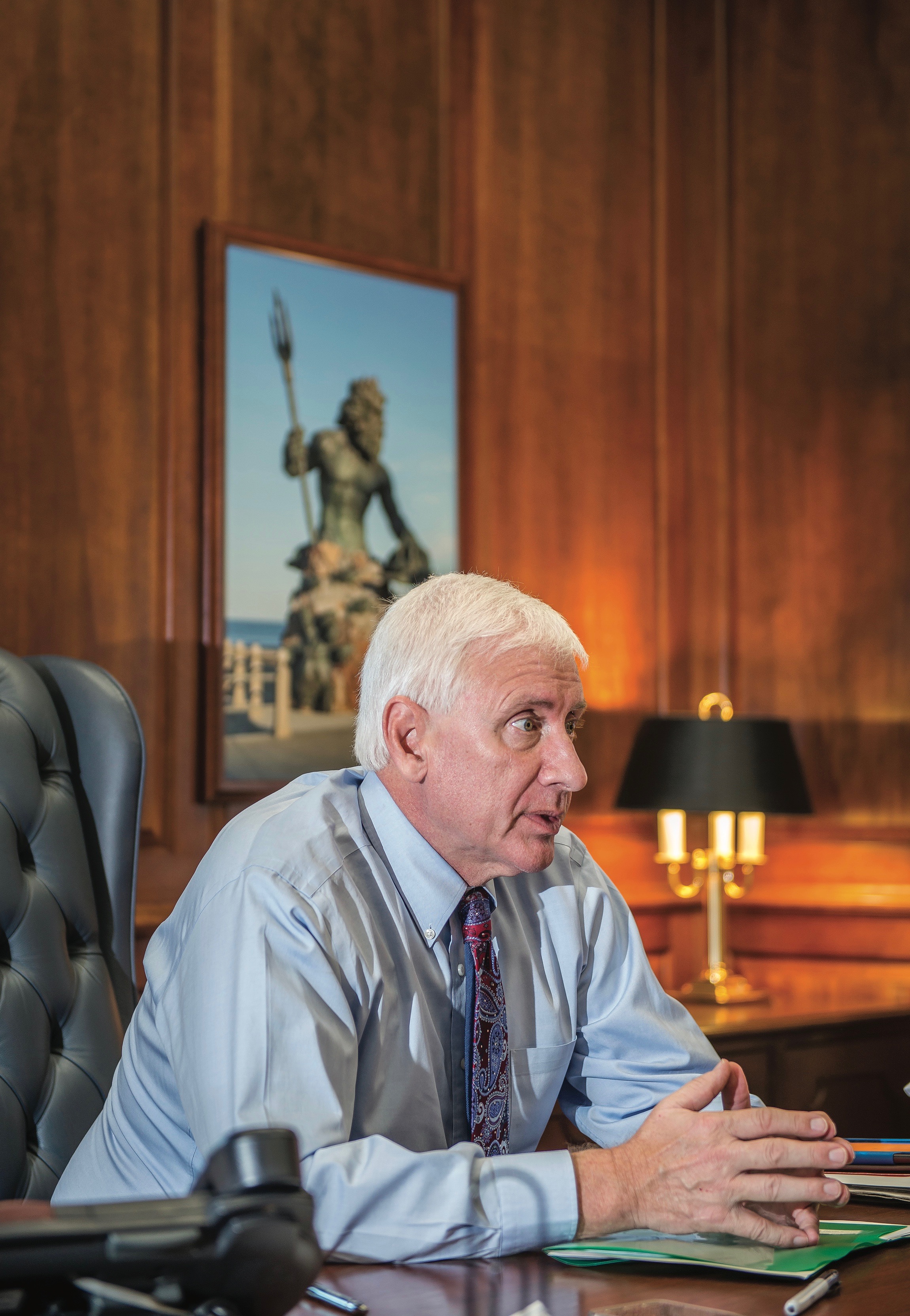 CoVa BIZ: Hampton Roads or Coastal Virginia? What would be your choice for the region’s name?

CoVa BIZ: Will light rail ever make it to Virginia Beach? Why or why not?

BD: Light rail was a problem. It was dated technology that was costly to run, and it could only run east-west. We have to come up with a system that not only has an east-west component but that also has a north-south component. The other thing is that we have some emerging technologies on the horizon that have a great potential to solve our traffic problems. Mass transit like light rail is more effective in cities that have a grid system, like New York, Chicago, Boston. Virginia Beach is a big city with too many round neighborhoods, and we’ve got over 700 bodies of water, so it’s rough to get a system that’s effective. But I’m convinced that when we put some smart minds together that we’re going to come up with a solution that’s practical, feasible and affordable.

CoVa BIZ: What would you say has been the key to your success as a city councilman and now becoming mayor of Virginia Beach?

BD: My belief in the people. Good government should never fear an engaged and educated public—we should embrace them. I’ve always tried to include the public in a lot of my decision processes and value the opinion of the individual voter. I think it’s important going forward that I help build the bridge between the people and their government. A lot of folks don’t have trust in government anymore. I think we really have an opportunity here in Virginia Beach to engage our public and make them part of the decision process.

6 Tips for Women in Business