Trending Now
Protecting Patient Data
Market Report: Health Care
How to Find Pandemic Relief with the Help...
Millennial Personal Appearance and the Law
Hacking is Becoming Less Human, More Robotic
Impacting the Workplace Loneliness Epidemic
Ransomware: What It Is, How to Avoid It...
Using Technology to Increase Employment Opportunities for Veterans
How Technology Has Caused a Shift in Marketing...
Out-of-Network Follies with Health Insurance
At Home

From Humble Beginnings To Leading A Billion-Dollar Company, TowneBank Founder Bob Aston Maintains His Vision To Serve Others

On an afternoon in May, overlooking the Elizabeth River, the Portsmouth home of TowneBank founder Bob Aston sits on the greenest of lawns—a perfect day for him to take his tractor out for a spin. TowneBank founder Bob Aston sits on his riding lawnmower, the Elizabeth River at his back.

“My days are usually filled with work, and weekends are filled with working in my yard and washing my cars,” Aston said. “[It’s] not the most exciting life, but it’s what I love to do.”

His living room is filled with family photos, some faded from the sun. Aston grew up on a farm in Suffolk, what was then Nansemond County, before moving to Portsmouth where his family still resides. Before finishing high school in Portsmouth, Aston went to work and never attended college. While he later attended banking schools at University of Oklahoma and University of Virginia, most of his banking knowledge was learned on the job.

Down the hall hangs a black and white photo of Citizens Trust Company, the first bank he worked at while in high school.

Though making hamburgers was his first job, his first real job, as he calls it, was at Citizens Trust Company (essentially where the Children’s Museum of Virginia is today), a job he acquired through his high school’s vocational training program.

“At the time, I would have to say I was just happy to get the job, you know, regardless of where it might be,” he laughs.

From getting coffee for people to making their toast and filing checks, Aston’s first banking position started small.

“Any kind of grunt work they could dream up,” he said. “That’s what I did.”

In September, Aston will celebrate 52 years in the banking industry. Today, TowneBank has 37 branches and $6.7 billion in assets.

“And that was starting from the first day when we had zero,” he chuckles.

After expanding to Richmond in 2015 with seven locations, Aston isn’t stopping there. TowneBank is currently in the process of buying Monarch Bank, hopefully by June 24, he said; the purchase will increase the company’s assets to $7.6 billion.

Of course, those numbers don’t add up overnight. 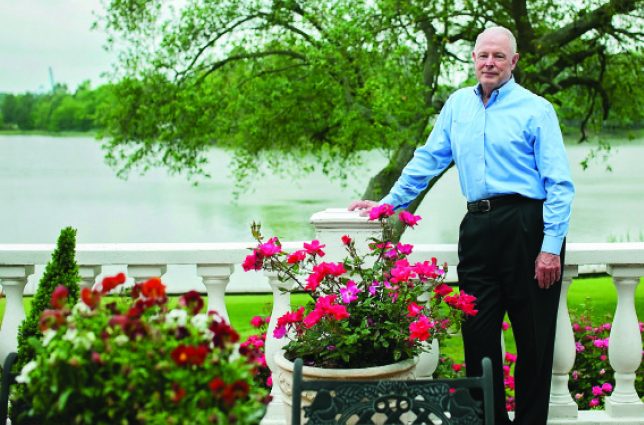 My days are usually filled with work, and weekends are filled with working in my yard and washing my cars,” Aston said. “[It’s] not the most exciting life, but it’s what I love to do.” 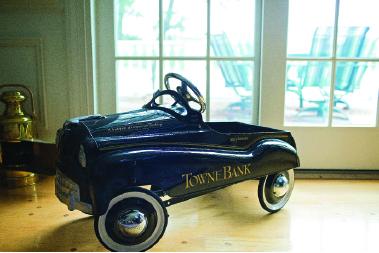 A vintage pedal car adorned with the TowneBank logo.

It all began in a garage. From the summer of ’98 to April of ’99, Aston and about 25 others worked out of his home’s garage before they opened three locations in Portsmouth, Virginia Beach and Chesapeake.

“My son, who’s up there [points to a family photo on the wall]; he was about 6 at the time, and he was our designated security officer,” Aston said. “He had a police motorcycle that was battery-powered. He would wear his Batman suit and escort all the ladies to their cars out of the cul-de-sac each night; so he was our official first security officer.”

We walk next door to the garage, the very garage of the bank’s beginnings. During those first three months in ’98, Aston and the rest of the team built the culture of the bank, what they wanted to stand for and how they wanted to operate.

“Our vision for the company really wasn’t so much about the bank as it was building up a great community asset that would be here for generations to come,” Aston said. “We never set out to be the biggest bank in town; that really wasn’t the objective.”

Despite his humble beginnings, Aston’s vision and style of leadership planted the seeds that have led to the flourishing company TowneBank is today.

Aston recalls a time in his 20s when his boss explained that developing followership was the secret behind great leadership.

Decades later, TowneBank continues to live out the same vision since day one. During the 17 years they’ve been in operation, TowneBank Foundation has given nearly $37 million back into the community. “We never strayed from that philosophical belief that we’re really here to serve others,” he said. “I don’t measure success by money; it’s really about what we can do with that money and what we can do to help people.”

Above the garage is an office and entertainment area with a conference table, a pool table and bunk beds built inside an exposed closet for his kids, an idea he’d seen in Southern Living. A coach for 40 years, Aston has lined his walls with championship trophies and his kids’ sports memorabilia. It’s a part of his life he considers to be some of his greatest personal achievements.

Success to Aston is simply defined by having a passion for what he does.

“One of the real advantages I’ve had in life is to have a professional position that I truly loved every minute of every day. So many people spend their life at a job that may be a great job, but they really don’t love it. And I think whether you’re doing civic work or charitable work, or whatever, having a passion for it, you will be better at it,” Aston said.

At 71, the father of five and grandfather of six doesn’t plan on slowing down any time soon.

“I expect to be around for a few more years,” Aston said.