The Business of Sports in Coastal Virginia

Sports is a booming business, and sports tourism alone knocks it out of the park by making a multi-billion-dollar impact in the U.S. according to the Sports Events & Tourism Association (Sports ETA).

Sports tourism, one of the fastest growing sectors in tourism, can simply be explained as athletes, coaches and fans traveling to competitions and spending money, which brings economic opportunities to the cities that host the events.

Super Bowls, Olympic Games and the World Cup immediately come to mind when you think of sporting events that draw people from all over, but what about on a local level? From collegiate competitions and youth leagues to 5K races and traveling tournaments, the Coastal Virginia region has been wading into the sports tourism waters and benefitting economically in the process.

With two professional sports teams, as well as college and university athletics, rec leagues and top-notch facilities, the Coastal Virginia region is looking to cash in on the business of sports.

One of the hot topics when it comes to discussing sports in our region—and even the state—is whether or not Coastal Virginia should have a professional sports team. The region is currently home to the Norfolk Tides, a AAA minor league baseball affiliate, and the Norfolk Admirals, a mid-level professional ice hockey team.

Being one of the few metropolitan areas in the United States, by population, without a major professional sports franchise, Coastal Virginia seems like a perfect candidate on paper. Despite this, the region has yet to attract a major league sports team, but it’s not for lack of trying. Attempts have been made over the last three decades, including an attempt at an NHL team in 1997, an NBA team in 2002 and an MLB team in 2004. In all cases, Coastal Virginia cities lost out to other markets.

“Hampton Roads, as a region, is in a very awkward circumstance in that it’s not quite large enough to host major league teams,” says Dr. James Koch. Koch is an economist, economics professor and president emeritus of Old Dominion University, who also curated the Dragas Center for Economic Analysis and Policy’s State of the Region report for several years.

“It often times acts like it is a viable competitor for teams, but it is used primarily as a bargaining chip for major league teams to bid up the alternatives.”

Koch cites dozens of studies that show regional and city investment in a major league team don’t pay off in the long run. He states that for cities to be financially successful, they must import money from the fanbase.

“Unless a team is able to attract fans from outside its jurisdiction, all they’re going to do is redistribute expenditure, so there is no net plus at all attached to a major league sports team,” Koch explains.

While Koch attributes the division of the cities and population to why a major league team would not be as successful in Coastal Virginia, he does note that other sports competitions can take advantage of our widespread region, much like the Amateur Athletic Union (AAU) Junior Olympic Games do.

“People come from all over the state and up and down the Atlantic coast to compete in those contests. That’s a net plus because they’re importing revenue rather than redistributing what’s already there.”

The AAU Junior Olympics, considered the largest national, multi-sport youth event in the country, is a prime example of success in regional cooperation and sports. The Hampton Roads Sports Commission (HRSC) was awarded a five-year rotation to host the games and was set to do so in 2020 prior to the COVID-19 outbreak, generating a prospective $50 million in economic impact to benefit the region. 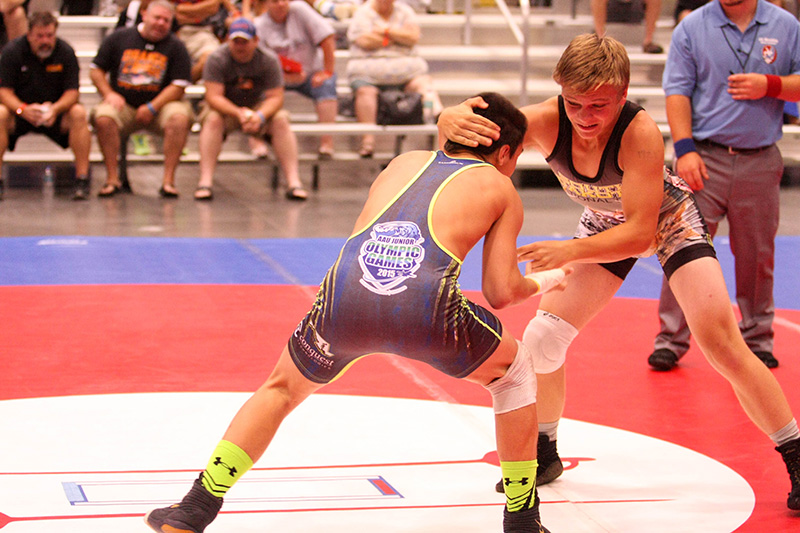 The HRSC is the sports arm of the Hampton Roads Chamber of Commerce. The commission, founded in 1999, works to bring local and national sports events to the region, that in turn stimulate the economy and enhance the quality of life within the region. The HRSC has generated over $227 million, since its inception, in economic benefit for the region, as stated on the organization’s website.

The HRSC has brought 40,000 athletes, coaches and their families to the region through the AAU Junior Olympic Games. The games have taken place across the region five times since 1998, at venues including: the Chesapeake Conference Center, Boo Williams Sportsplex, William “Dick” Price Stadium on the campus of Norfolk State University, the Brittingham-Midtown Community Center in Newport News, the Virginia Beach Convention Center and Virginia Beach Fieldhouse.

According to HRSC executive director Claudell Clark, economic and sports tourism success all comes down to regionalism.

“It’s just a matter of the cities working as one region to show its worth.”

World-class facilities within the region lend to the opportunity to host a number of events, from rec leagues and amateur competitions to collegiate athletic championships.

If You Build It, They Will Come

To achieve the goal of becoming a greater sports destination, the region has developed and renovated a number of sports venues and facilities over the last few years, with more in the works.

The City of Virginia Beach looked to change the game by recently opening the $68 million Virginia Beach Sports Center. The 285,000-square-foot sports facility, located on 19th Street at the Oceanfront, boasts 12 basketball courts, 24 volleyball courts, a 200 meter hydraulically banked track, along with seating for 5,000 spectators, concession areas, an outdoor courtyard and 195,000 square feet of programmable space to accommodate a variety of events.

The sports center is already booked for 54 events in its first year, 39 of them new to the local market, said Virginia Beach mayor Bobby Dyer at the opening-day event.

Clark says the opening of the Virginia Beach Sports Center is a great start, but the region needs to utilize its facilities to attract a wide variety of sports, leagues and competitions.

“We need to look at larger indoor swimming facilities to capitalize on what we’ve done with basketball, wrestling, volleyball and some of your court-based sports that the sports center could host,” he explains.

In January 2020, Hampton City Council approved funding and the design plan for a $29.5 million aquatics center near the Hampton Coliseum. The current five-acre vacant lot has the potential to host large swim tournaments and further add to the region’s sports tourism efforts. The proposed plan design would include a two-story, 64,000 square-foot building complete with a 10-lane competition pool, a community pool, diving boards and a splash park. 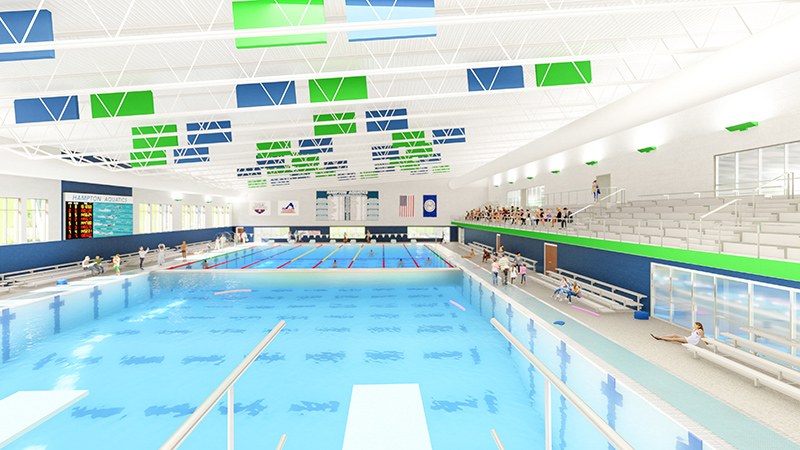 This 135,000-square-foot indoor sports facility, dedicated to amateur athletic competitions, was developed by athlete, coach, youth sports advocate and Hampton-native Boo Williams, in a partnership with investors and the City of Hampton. The Boo Williams Sportsplex has played host to a number of competitions, such as: USA Volleyball, Nike Boys and Girls Basketball, high school track competitions and AAU games.

James City County boasts a number of fields, trails, lakes and parks that host sporting events, while Norfolk’s Scope Arena is home to the Admirals hockey team and has been the site of the Mid-Eastern Athletic Conference’s Men’s and Women’s Basketball Tournament for the last eight years.

The new Virginia Beach Sports Center, Hampton Aquatics Center and sports facilities in our area further amplify Coastal Virginia as a destination market for not just summer fun, but also year-round sports. The HRSC notes over 30 sports facilities across the region, from the Peninsula to the Southside.

The Future of Sports in Coastal Virginia 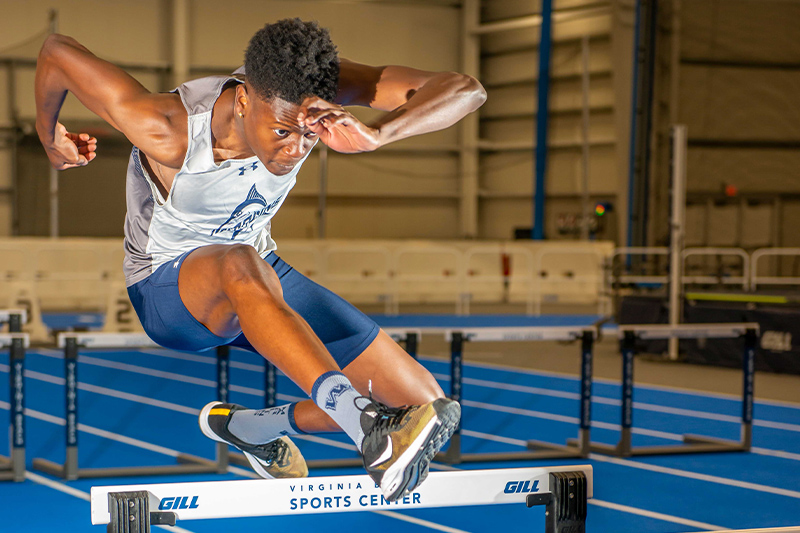 One thing the region has been successful with is renovating and developing new facilities to meet the demand of not only local leagues and teams, but also championships and competitions that bring athletes and fans from across the country.

“We ought to take advantage of the fact that let’s say Virginia Beach has some terrific sports facilities that are capable of sponsoring tournaments, and essentially make them regional enterprises,” says Koch.

Much like many other issues in our region, success of sports tourism in the area will come down to collaboration over competition.

“The bane of Hampton Roads is that every city has to have one of everything. It’s economic suicide,” Koch says. “We have to focus on a regional approach.”

Sports ETA reports that nearly 180 million people traveled to a sports event in the U.S. in 2019. Sports travelers, event organizers and venues spent $45.1 billion that year, generating $103.3 billion in business sales. Once Coastal Virginia can begin to work as a team, the region will be able to cash in on this billion-dollar industry that draws interest year-round.