“They brought in the state of Rhode Island and dumped it,” jokes Will Smiley, resident ecologist at the Tides Inn resort in Irvington, Virginia. Well, not exactly, but it paints picture of the sheer volume of sand and soil that was required to replenish and reconstruct portions of the property’s picturesque waterfront along Carter’s Creek. It is all part of a massive, multi-phase shoreline restoration and enhancement project aimed at not only elevating guest experiences at the popular vacation destination on the Northern Neck but demonstrating a long-term commitment to environmental stewardship.

In 2021, over a period of two weeks, 20 dump trucks carrying 16 tons of sand each were brought in day after day to build up the resort’s beach alone. By February of 2022, as winter still clung to the chestnut oaks near the water’s edge, many times that amount of soil had been carted in to repair and reshape the bluffs along the resort’s northern edge. 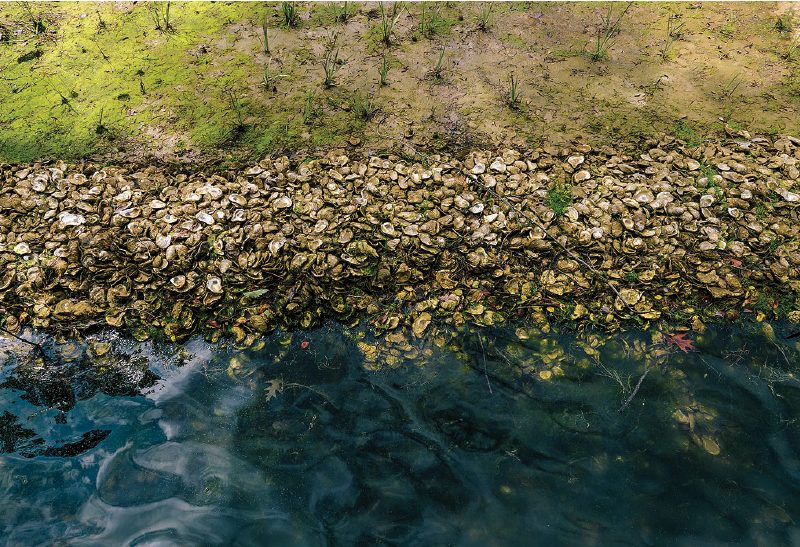 Photo courtesy of The Tides Inn

Months later, summer tourism was gearing up, rooms were booked and guests were gathering for activities and boating trips leaving from the Tides Inn’s marina and winding their way into the Rappahannock River or the Chesapeake Bay. The resort has shared an intrinsic relationship with these storied waterways since it opened in the mid 1940s, and like other coastal tourist destinations with a vested interest in sustainability, they have become more proactive in efforts to protect and improve them in recent years.

Photo courtesy of The Tides Inn

Case in point: the Tides Inn’s remarkable $3.6 million living shoreline project, years in the making, and the largest private undertaking of its kind to date in Virginia. Its latest phase included the unveiling of a low boardwalk that snakes gracefully along the reconstructed bluffs and welcomes pedestrians who can take in the beauty of the water and wildlife as the tide ebbs and flows beneath it, lapping over freshly planted oyster reefs designed to improve water quality.

In late spring of this year, Smiley and Tides Inn horticulturalist Matt Little offered insight into the process as they gave a tour of the boardwalk, the newly shaped cascades of earth adjacent to it and the native plantings designed to keep it all in place. “We want to be able to see the bottom from June to October,” Smiley noted while peering into the brackish water beneath the walkway, “That is a key bioindicator of success.”

Little, meanwhile, showed off the tiered rows of freshly planted native grasses, 12 varieties total, along with fragrant sumac, wax myrtles, buttonbush and more, strategically placed along the shore to stabilize the banks, eventually create a carpet of protective vegetation and do their part in filtering out excessive nutrients, which can be harmful to the broader marine ecosystem when left unchecked.

“By rebuilding these wetlands, they have built a giant passive filter,” Smiley says, “and a key part of this is that diversity builds diversity.” In other words, by increasing the number of native species, both aquatic and terrestrial, they are promoting overall biodiversity that will build on itself and contribute to a healthier ecosystem in the years to come.

“As we are situated on Carter’s Creek, a tributary of the Chesapeake Bay estuary, we are mindful of our role as stewards of the land and water in this special place” notes the Tides Inn’s website. “Our waterways are home to two famous residents, blue crabs and oysters, as well as more than 3,000 migratory and wildlife species that call our area home. Here, we highlight our hotel’s efforts to be environmentally conscious and compassionate neighbors in our Northern Neck region.”

Hands-on educational programming and community partnerships are also a key aspect of the shoreline project, and the resort has incorporated signature experiences that allow guests to be a part of that. The Tides Inn is owned by the Enchantment Group, headed by financier Oscar Tang and his family, members of which were on site and participated in a special planting event for the living shoreline earlier this year. Dana Tang, daughter of Oscar Tang, is a partner with Gluckman Tang Architects, which served as design lead for the shoreline project.