Trending Now
Protecting Patient Data
Market Report: Health Care
How to Find Pandemic Relief with the Help...
Millennial Personal Appearance and the Law
Hacking is Becoming Less Human, More Robotic
Impacting the Workplace Loneliness Epidemic
Ransomware: What It Is, How to Avoid It...
Using Technology to Increase Employment Opportunities for Veterans
How Technology Has Caused a Shift in Marketing...
Out-of-Network Follies with Health Insurance
Biz Report

Stories to Watch in 2021: HRBT Expansion Builds a Bridge to the Future

With a price tag of $3.8 billion, it’s the single largest transportation infrastructure project in Virginia history. And, for many folks who have spent countless hours of their commuting lives stuck in traffic at the Hampton Roads Bridge-Tunnel, it can’t come soon enough. 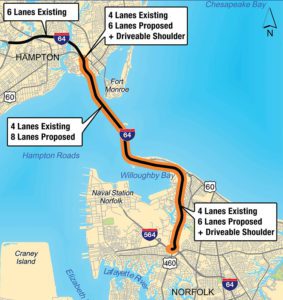 Officials broke ground in October 2020 on the five-year project that will add twin two-lane tunnels adjacent to the existing bridge-tunnel and widen I-64 in both directions. Hampton Roads Connector Partners is the prime contractor for the project.

Drivers should expect to see pilings being driven into the water alongside the bridge first. Later, a tunnel-boring machine will be assembled and set to work excavating the new tunnels. Just like current tunnel traffic, however, don’t anticipate this project getting there in a big hurry. Estimated completion date is November 2025.

Stories to Watch in 2021: Navigating the Road to Economic Recovery

Stories to Watch in 2021: Summit Pointe an Urban Destination in Chesapeake