Selden Market, located in downtown Norfolk, is pleased to announce that S’mores Amore will occupy a storefront location beginning Aug. 21. Selden Market helps small businesses get established by providing a nurturing environment for local entrepreneurs to create and expand their businesses with affordable rents, education and a supportive peer community.

S’mores Amore was established in July 2018 at Selden Market as a pop-up vendor. It offers customers the ultimate s’mores experience by giving them all of the elements of having s’mores at a campfire with a modern twist.

It offers one-of-a-kind variations in a multitude of flavors of s’mores brownies and blondies. After a very special process, each s’more is hand cut and made with layers of made-from-scratch fluffy marshmallow, brownies or blondies and its homemade graham cracker cookie crust. S’mores Amore torches the marshmallows on top to recreate the smells and gooey deliciousness that is the most satisfying and magical part of s’mores. A recently expanded menu provides customers with other dessert offerings.

Owner Duane Dinio graduated from Old Dominion University in 2003 and the Culinary Institute of Virginia in Norfolk in 2010. In 2019, 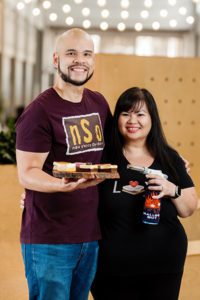 S’mores Amore was selected as one of only a handful of local vendor partners to feature products in Wegmans Food Markets in Virginia Beach.

“Selden Market was the only place in the Hampton Roads area that offered an opportunity for a startup food service business like ours to begin our journey into entrepreneurship while being affordable,” said Dinio. “In addition, Selden Market offers a multitude of resources to encourage the development of all of the businesses in it who are committed to growing their brand.”

S’mores Amore popup is open on Fridays and Saturdays until the storefront opens in August. Expect more menu items, special flavors, beverages and more as S’mores Amore continues to expand its offerings later this year.