A defense contracting company headquartered in Coastal Virginia, T2 has employees in Massachusetts and Georgia, as well as overseas (currently in Afghanistan). The core business has two distinct product areas: the first has to do with data management; the second deals with intelligence. They place and leverage high quality and experienced military and civilian personnel all over the world to provide unmatched expertise to successfully complete their customers’ strategic and tactical requirements.

“We deal with what is currently called ‘data scientists,’ when it comes to information management,” says Tom Richards. “We provide a team to the government that includes people, processes and technology. The other part of what we do deals with intelligence, which is kind of a broad term. Other terms that may work include counterintelligence or all-source intelligence, but the term that’s probably most familiar to people today is biometrics.” 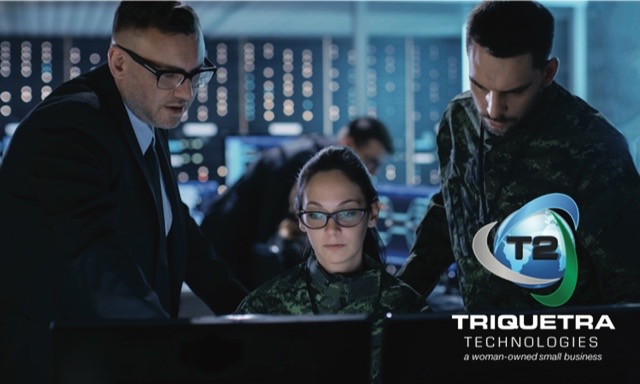 T2 works with all branches of the Armed Forces, including Army, Navy, Air Force and Marines, but they primarily work with the Army. Richards is a retired Air Force officer, which gives him unique insight into the services they provide.

“I was working in another business owned by a friend, and my wife wanted to get involved,” says Richards. “She was already familiar with the military and defense and had done various jobs related to defense, and she said, ‘Why don’t we do what they do?’ I thought that was a great idea, but I didn’t want to give up the job I was currently working. She said, ‘Why don’t you let me start it up? You can help me with the paperwork and getting started, then I’ll figure out how to get some contracts.’ After about six months, we had some pretty good contracts working with Lockheed Martin, so I left my job and started working with her. We did that out of our house for about 18 months, then we decided we needed to do something a little more formal.”

They eventually settled near the City Center area of Newport News because it is close to Langley Air Force Base and Fort Eustis.

Government contracting can be a very competitive business, but according to Richards, there are two things that keep T2 competitive and growing. “The first thing is, you’ve got to recruit the right people. That’s not as easy for a smaller company when bigger companies might be able to provide better insurance programs, better 401(k) retirement plans, etc. We just don’t have as many tools to play with. But we work very hard at recruiting and finding the right people for our clients. And we do that. In fact, one of our primes said that we were the number one sub they had, which really shocked me because they are a $300-million-a-year company with lots of other subs. But it’s all due to us finding the right people and getting them to work within what we have to offer. The second thing is, it’s not all us. I don’t know what your belief systems are, but I think God gives us favor.”

Proof that their recruiting efforts are working come in the form of letters of recommendation from their clients. “I’m really proud of our recruiting and of the people we have working for us,” says Richards. “Our people, especially those who are overseas, really take their jobs personally. We’ve got very little input at that point. But we know we’ve got the right person for the job when we get letters from Army officers saying things like, ‘Your employee provides a level of service that we’re not even used to.’ That’s pretty impressive.”