Halloween is a Multibillion-Dollar Industry, but What Does the Future Hold for Local Costume Shops?

“That rush in the final days is … something else,” says Cathy DeBolt with a sigh. “I always warn people to come in early, don’t wait until the end. In the last week before Halloween, customers are just rushing and grabbing whatever and going … it can be hectic.”

DeBolt, owner of Echoes of Time in Virginia Beach, prides herself on her costume shop’s customer service—”We want you to look good”—but it’s almost impossible for staff to really assist during this annual mob scene. “Shop early,” she repeats.

Back in 1979, her mom, Evie Myatt, started Echoes of Time as a Virginia Beach antique store. Then the costumes took over. “When we moved into a smaller space, we just decided to do costumes, and that’s how we’ve built up such a large inventory.”

Today, Echoes of Time—showcasing its appropriately-macabre hearse—specializes in fanciful adornment, renting high-end costumes as well as selling the prefabbed, bagged top-sellers. “You can buy almost anything, but with the rental the quality is better,” she says. “We try to carry it all. If customers don’t want the rental, they can buy the less expensive alternative.”

Echoes is one of several brick and mortar costume outlets across Coastal Virginia selling the hottest Halloween trick-or-trendwear and bric-a-brac. “We’re a little different in that we don’t sell children’s costumes,” DeBolt says. “We do have some kids’ book report costumes, like Thomas Jefferson, but the rest of the store is totally adult.”

Halloween without kids. That isn’t as odd as it sounds. Fueled by anime and comic conventions, office and condo costume parties, 5K runs and neighborhood spook walks, playing dress-up has evolved into a year-round, and grownup, activity.

“Adults are definitely more into it than they used to be,” confirms Andrew Powers, the acting store manager for the Party City location at Coliseum Crossing in Hampton, one of nine Coastal Virginia locations in the national costume chain.

“Adults are also interacting with their kids more at Halloween. They come in to buy a costume with their son and daughter so that they can dress up together and go out like a group of monsters. People will come in and plan a work event, or for a school, or a community center party. There’s so many costumed social events now.” 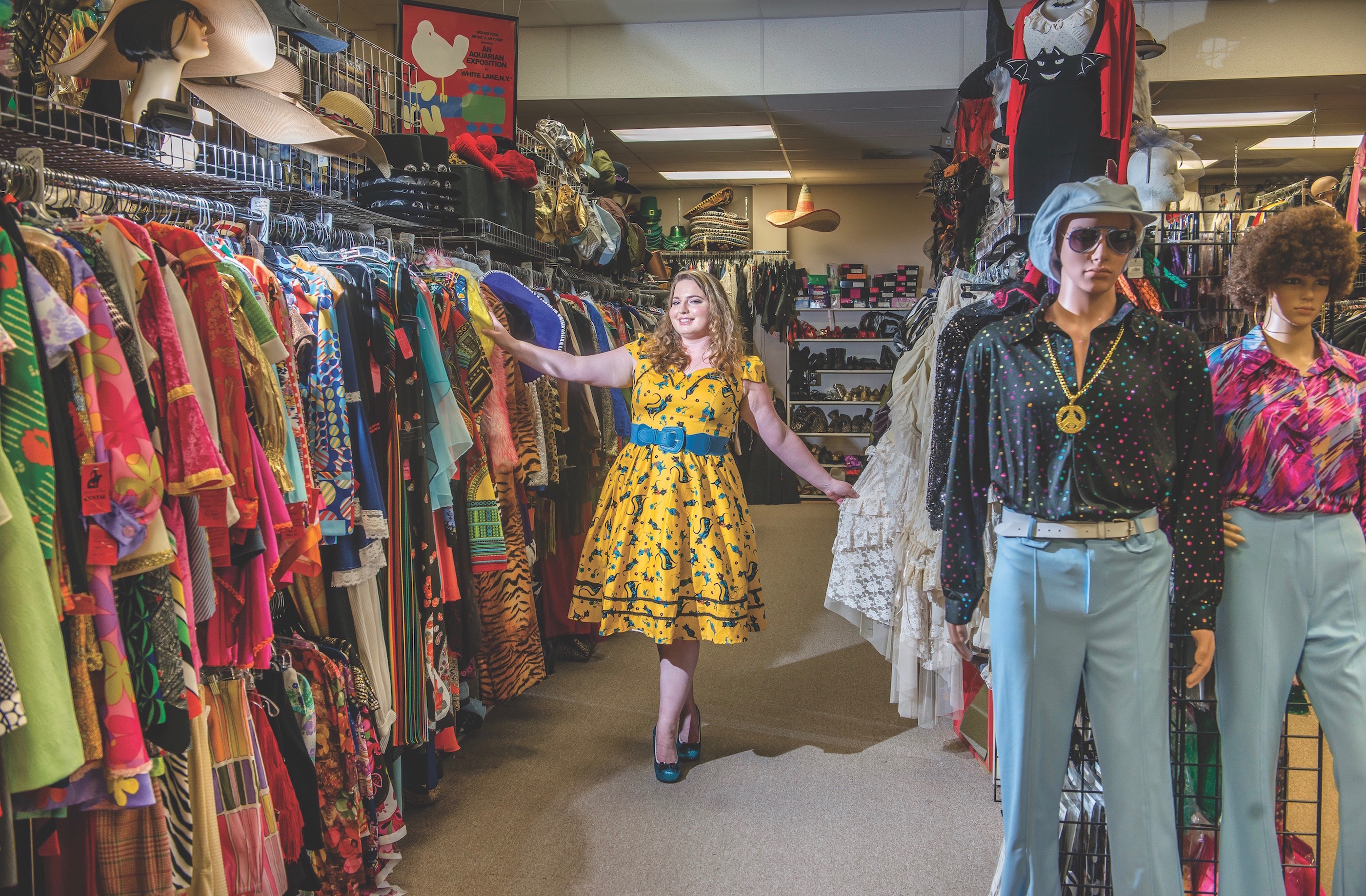 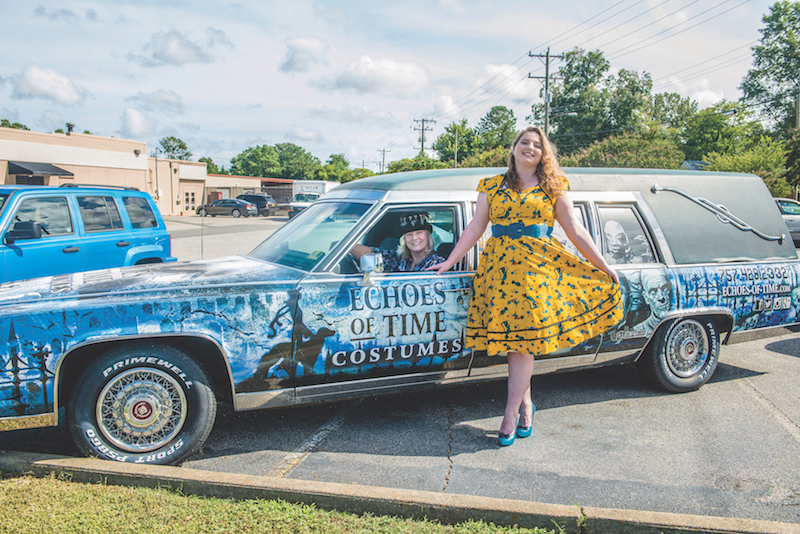 Bridgette DeBolt is a third generation employee at Echoes of Time. Cathy DeBolt takes the driver’s seat in their roving billboard, a 1980s Cadillac hearse. Photos by David Uhrin.

All Hallows’ Eve is now second only to Christmas in holiday sales, according to a report from the National Retail Federation. In 2017, the NRF reports, Halloween sales hit an all-time peak of $9.1 billion, with more than 179 million participating consumers.

Experts predict that this year’s mass ghouling will eclipse those numbers, and costumes of the latest dress-up trend—from killer clowns to TV’s “Riverdale” to inflatable dinosaur suits—are just a part of it. There’s also lighted skulls, zombie makeup, lifelike wigs, house decorations, motion-censored yard creatures, wailing ghost simulators and all the necessary accessories. (Candy, according to a report by IHS Markit analysts, reached its own seasonal record last year of $4.4 billion in sales.)

“A main driver of Halloween is millennials,” says Aleisha McMillan, marketing director at the Halloween and Costume Association (HACA), which represents the top costume manufacturers. “There are more than 27 million millennial moms right now, and they are now the demographic that spends the most on Halloween.”

The nonprofit HACA lobbies for Halloween industry concerns, partners with Google on an annual list of trending costumes and co-sponsors an annual Industry Expo for retailers in January, usually in New Orleans. That’s where costumers, like the mega-giant Rubie’s—which holds most of the patents for popular Marvel, DC and Star Wars characters—unveil their upcoming product for retailers from across the country.

“It helps us to know what products to have in the store. Each year is different,” says Betty Hermann of Novelties Unlimited in Norfolk, adding that many of the projected winners this season include Marvel Comics’ Black Panther, DC’s Wonder Woman, Harry Potter and the character Eleven from TV’s “Stranger Things.” Disco outfits—big afros, glitter pants, fake chest hair—are also trending.

Hermann started Novelties “on a shoestring” in 1980. It’s since become a Ghent mainstay, its creepy clown head, which once greeted visitors at long-gone Ocean View Amusement Park, lording over a giddy assortment of costumes (both rented and sold), balloons and political masks. “We expanded over the years,” she says. “We bought the building and parking lot and always reinvested in inventory.”

Makeup is big here, not just the ghoulish, cheap-o brands, but the professional, thespian variety. “We service the students at schools like Old Dominion University, Hampton University, Norfolk State. All of them have theater and makeup classes, and they need makeup kits”

Costume shops can often reveal who we want to be and even note changes in societal attitudes, says D. Nachnani, of Harygul’s Halloween Planet in Virginia Beach. “Right now, girl power is in.”

“In children and adults, there’s been a rise in popularity for costumes that embody strong women. Wonder Woman was a strong seller last year, and Buffy the Vampire Slayer and Kate Beckinsale from Underground. We even carry versions of Deadpool for women. It’s totally changed. Now you can be whatever you want to be.”

Harygul’s has its own origin story, and owner Nachnani can still remember the wind blowing through his acrylic cape … and the embarrassment.

“My Dracula costume was ripping,” he recalls. “I was a kid, and my dad was taking me door to door for Halloween. He came away from it thinking that there had to be more to the holiday than the cheap wares sold in most stores back then.”

Eventually, father Gary took that observation and started a Halloween and costume shop. Although it was once a year-round store, Harygul’s now operates two Beach “pop-up” locations in the months leading up to Halloween and by appointment and online year-round.

“I took it over in 1990 with his help,” says Nachnani, who also owns the Coastal Edge surf shop. “We’ve been doing it ever since in Hampton Roads. But it all started with a need.” 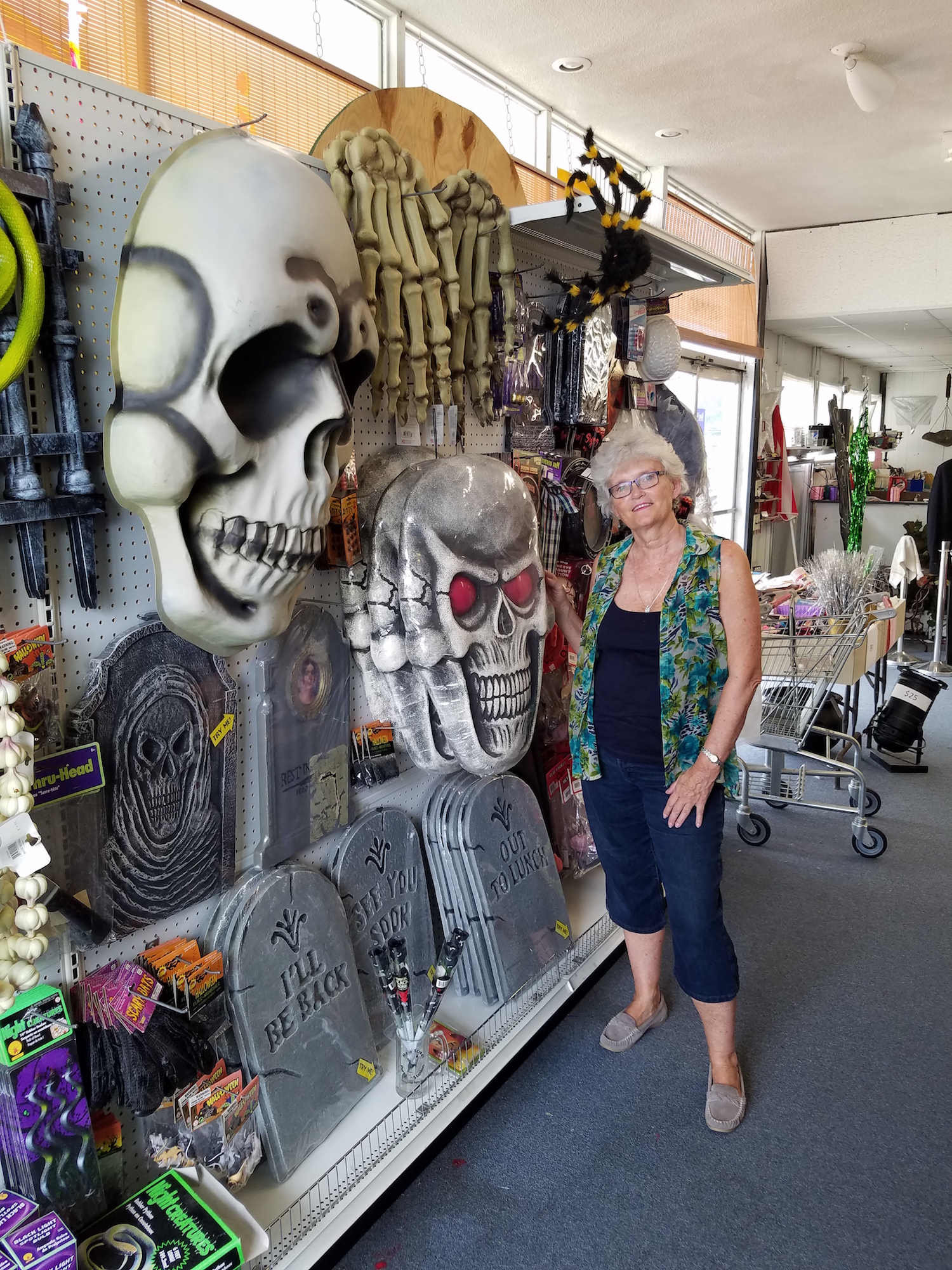 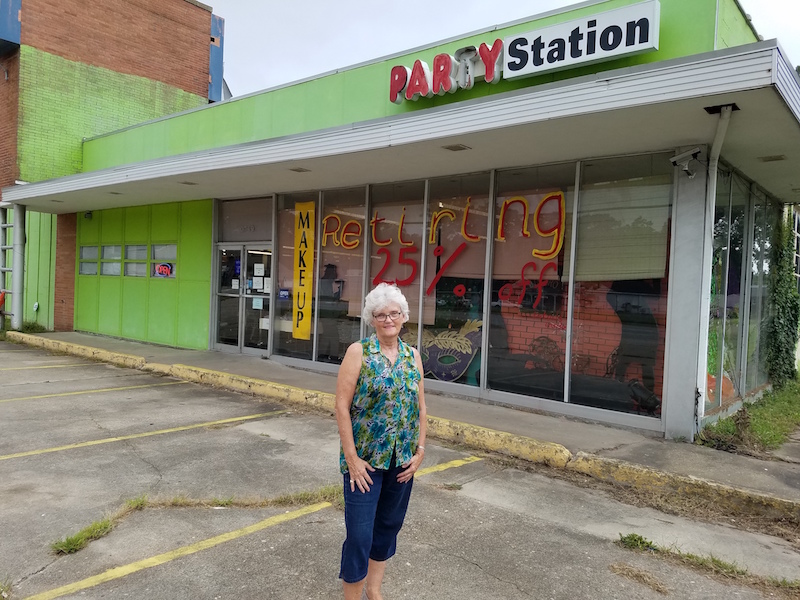 “Even the Spirit Halloween pop-up stores have been impacted by Amazon and other online outlets,” confirms Karen Grizzard, who is closing her longtime Newport News shop, Party Station, at the end of the year. “It’s just time. I’m ready to retire and be closer to the grandchildren.” Photos courtesy of Karen Grizzard.

While the Halloween industry projects huge numbers, one longtime mom and pop store is reading the tea leaves and hanging up its cape.

“There might be record sales,” says Karen Grizzard, co-owner of the long-running Party Station in Newport News. “But the money isn’t going to the brick and mortars. It’s going online.”

For 25 years, Party Station has been the Peninsula’s leading costumer, offering rentals as well as the latest goods, and servicing area high schools and universities with professional makeup. But Karen and husband Ken recently announced their retirement and will close the Station at year’s end “We have not been seeing these record-breaking sales they’re talking about,” she says, adding that her peak was 2008, before the recession and before the web took hold.

Self-described partygoers who loved to throw “horrendous Halloween parties,” the Grizzards bought the old Main Street Party Station, a supply store, in 1994, and turned it into a full-blown costume shop. “We’ve got customers who don’t want to go online, the ones who’ve been shopping with us for years, and we’ve also got younger folks into cosplay and anime who are getting makeup or accessories.” 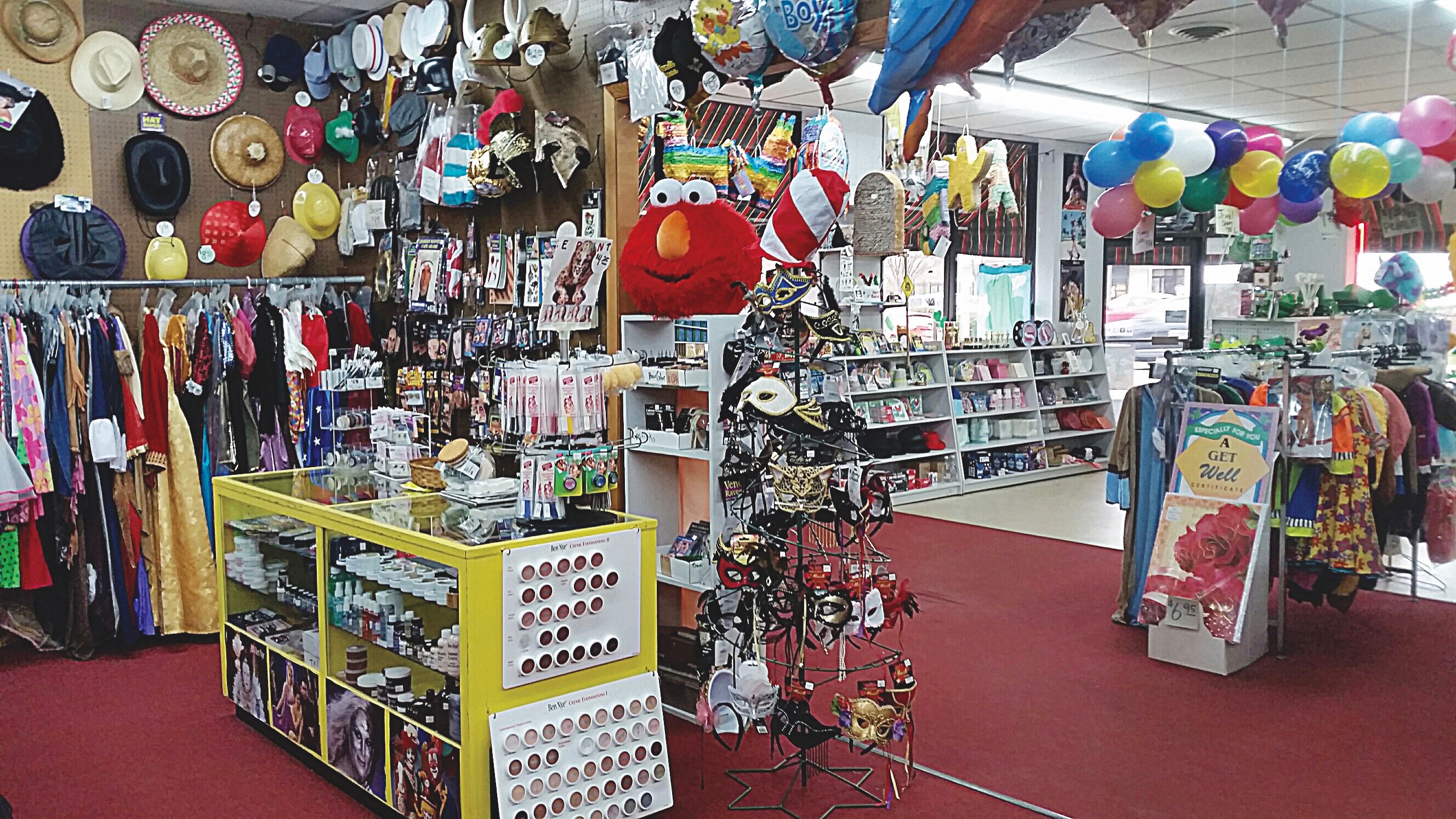 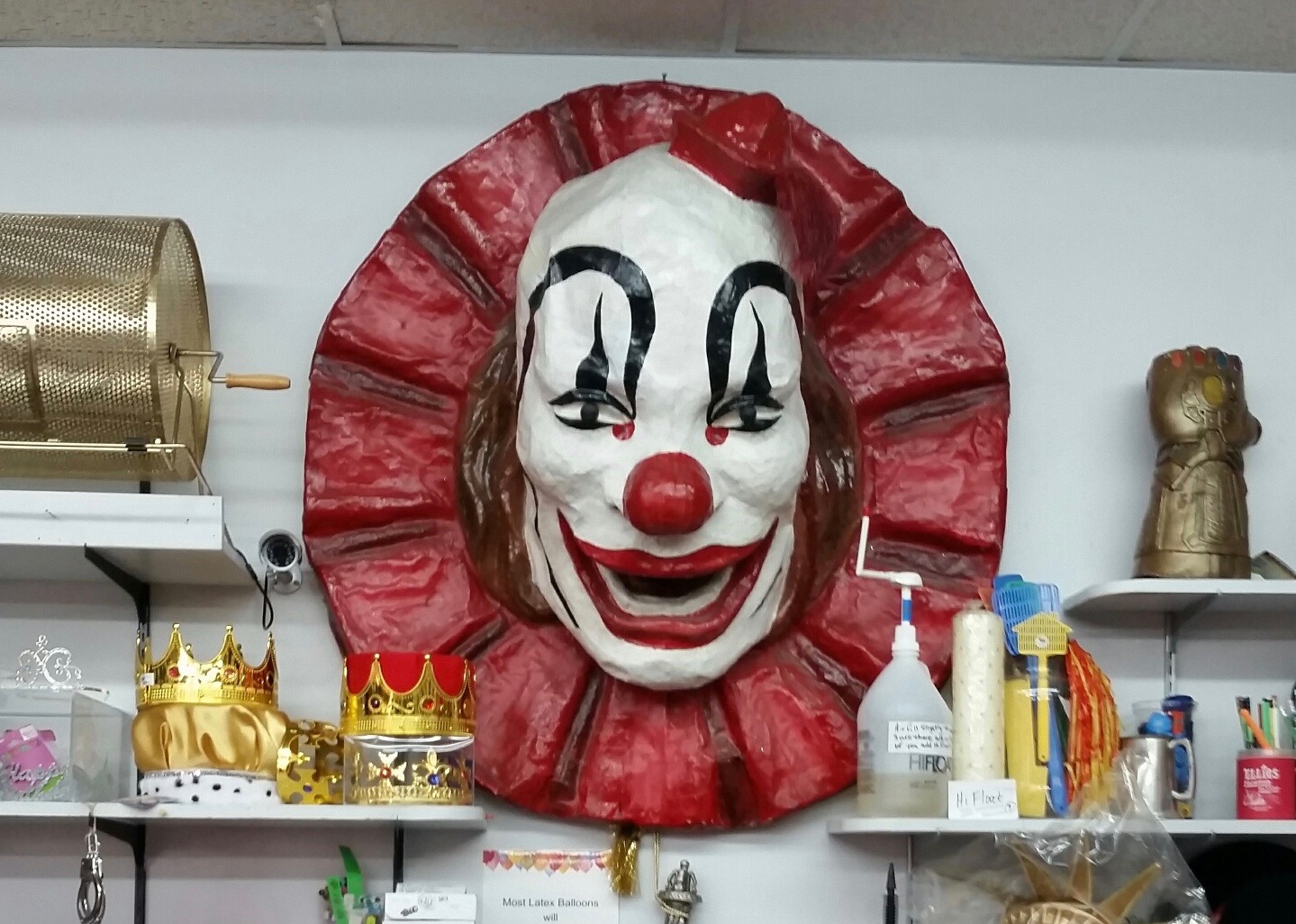 Far from dreading the inevitable throng of last minute-shoppers, Grizzard embraces them. “Those people need the brick and mortar businesses the most. Some of them are procrastinators, sure, or they haven’t decided if they’re actually going to an event. We’re their last hope.”

“More and more people want to stay at home and press a button,” says Hermann of Novelties Unlimited, who has also seen a drop in sales due to online purchasing, “and every Tom, Dick and Harry sells Halloween now, even gas stations and grocery stores. So it’s a very tough business to be in.”

Each season, Hermann has to order by no later than March 1 to receive Halloween product “and throughout the year I might order something here and there. But if you don’t order early, you don’t get the goods. You have to know the industry,” she adds. “Some of the companies will continue to make a product [upon demand], but others, when they sell out, they won’t manufacture more until the next year.”

Cathy DeBolt at Echoes of Time mentions another challenge: “There’s no way that I can have every costume in every size. A customer will see a picture of someone at a convention who may have spent thousands and a year to make, and they don’t realize the expense.”

The whole nature of costuming is changing, Karen Grizzard says. “Millennials are all into cosplay [dressing up as pop culture or anime characters]. Entire families are doing it, and the whole point is the creativity in making them yourself. They may not buy the costume from you but may come in to buy the weaponry or the makeup.”

One thing hasn’t changed, says D. Nachnani. “Halloween is still the one day of the year when you can be what you want and leave the cares of the world at your doorstep.” 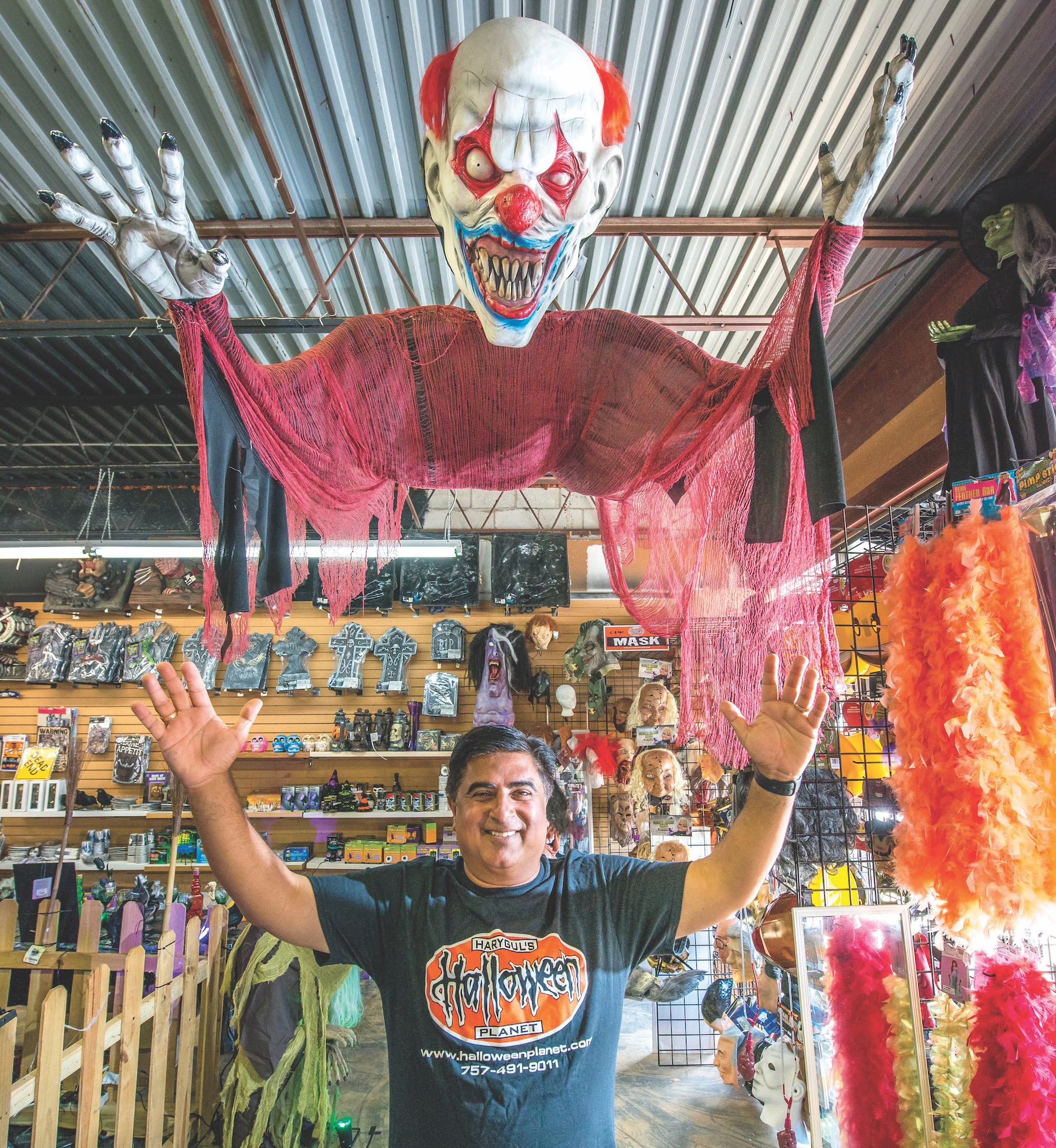 Dee Nachnani of Harygul’s Halloween Planet attributes Halloween’s rising popularity to a thriving entertainment industry. “There’s more variety for you to dress up, and the quality is much better than that old boxed costume with the mask and the rubberband. If you aren’t in the best of shape, we have muscle suits so you can really be a superhero.” Photo by David Uhrin.

This season, there are four Spirit locations scattered across Coastal Virginia, out of hundreds of temporary outlets nationwide. These instal-shops inhabit dormant retail and mall space—often a vacated Toys R’ Us—before the big spook. [Spirit employees and executive staff did not respond to many interview inquiries.]

“There aren’t so many pop-ups anymore,” says Hermann. “I think even they are feeling the effects of more people going on the Internet.”

Party City—which has one area pop-up location, Halloween City, in Chesapeake—says that if you can’t beat them, eat with them. “We’re partnering with Amazon.com directly and have a new online store, a huge plus for us,” Andrew Powers says. “If you’re not on Amazon’s side, you’re competition, and they are very good at hurting businesses.” He says that the New Jersey-based chain is in the process of developing other partnerships and new apps to help make the season even more shopper-friendly.

The retiring Karen Grizzard accepts this new landscape. “Millennials have just found a different way to spend their downtime. Rather than going into a store to shop for costumes, they go on the Internet. I’m not happy about it, but it’s reality, it’s what’s happening, and it’s the future.” She adds with a laugh that Amazon just got into the medical field. “So look out pharmacies.”

As for those throngs of last minute shoppers, “they will be the ones most drastically affected if the mom and pops are not out there,” she says.

With all of these Halloween industry changes and demographic shifts, do shoppers in Coastal Virginia still buy the old spooky standbys?

“The traditional sellers are phenomenal,” says D. Nachnani of Harygul’s Halloween Planet. Also contemporary variations. “One of the biggest costumes last year was a clown, Pennywise, from It.”

“Witches’ hats go with anything,” replies Karen Grizzard of Party Station. “But also vampires, zombies … Frankenstein and Bride of Frankenstein.”

“We sell out of witches’ hats every year,” Hermann at Novelties Unlimited adds. “And they’re never going to get rid of skeletons.” 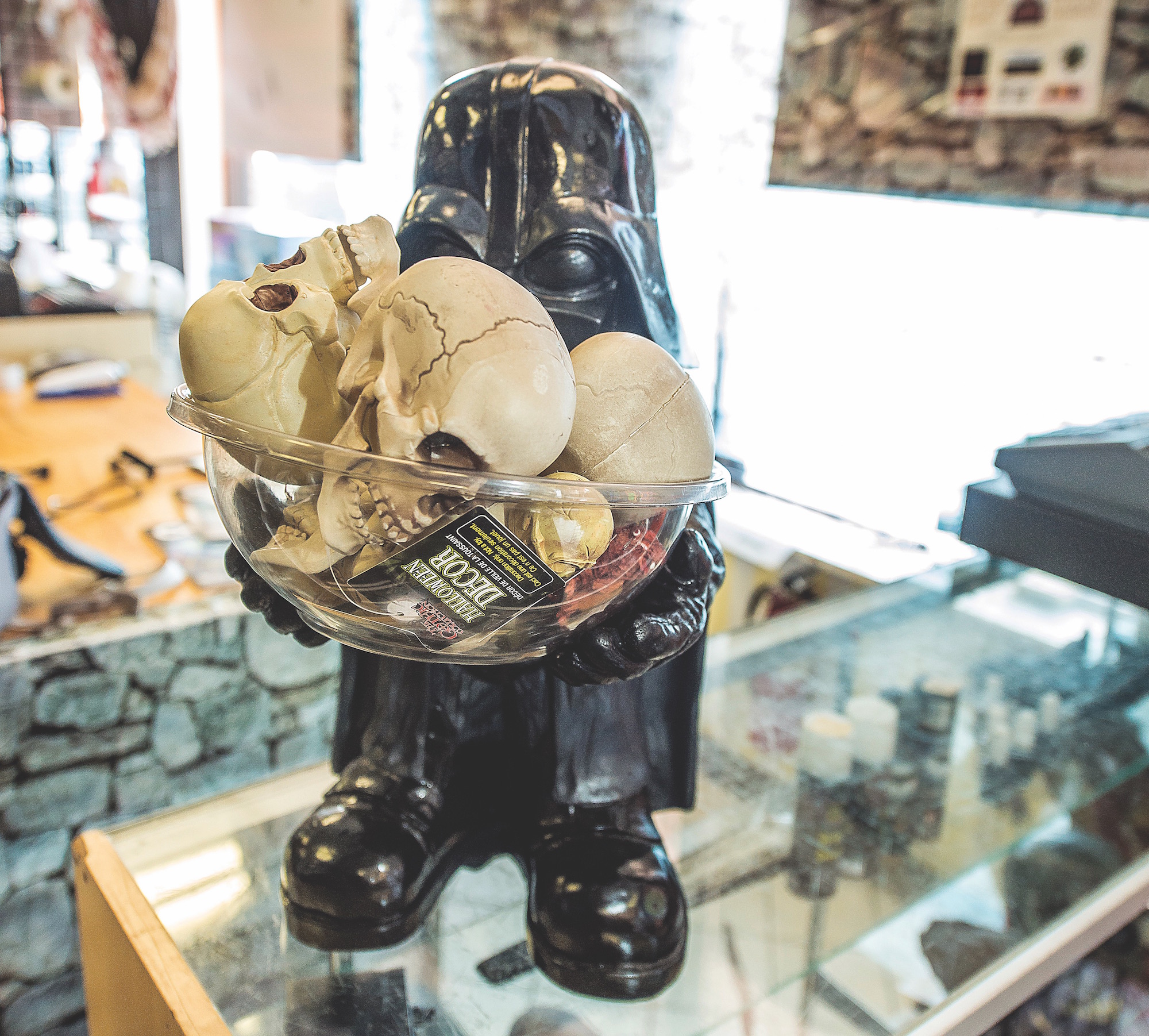 They’re Dying to Meet You