When visitors use their phones to scan a digital code on the first stop of the newly installed Walk the Hall tour for the Virginia Sports Hall of Fame, they’re greeted with a pop-up video of Kenny Easley. The former Seattle Seahawk and Chesapeake native explains to guests that in the exhibit, “we recognize and celebrate more than a century of athletic achievement by putting the state’s greatest sports legends on center stage.”

That “center stage” is now Virginia Beach’s Town Center, where a dramatically scaled down and re-imagined Hall of Fame features a free pedestrian tour of rotating exhibits installed at six publicly accessible indoor locations in office and hotel lobbies.

The lobby of the Clark Nexsen building, between West Elm furniture and Anthropologie clothing store on Main Street, is the self-guided tour’s first stop and home to both the “Hall of Honor,” which displays the names of more 300 enshrined athletes and other significant sports figures with ties to Virginia, and an exhibit of memorabilia related to the most recent class of inductees.

Other stops on the tour include Golf Masters, Coaching Legends, College Champions, Virginia’s National Hall of Famers and Virginia Year in Sports, a dynamic, colorful display of sports photography in the lobby of the Westin Hotel created in partnership with the Virginia News Photographers Association.

“What we have done is we are taking these exhibits to where the people are,” said Hall of Fame President Eddie Webb at a special opening event on Feb. 5.

For those who enjoyed visiting the Virginia Sports Hall of Fame’s signature brick-and-mortar location in Portsmouth before it closed its doors due to financial challenges in 2017, this reincarnation might be barely recognizable. But organizers are hoping this outside-the-box solution will be both a home run with sports fans and a sustainable business model for an organization that was facing the very real possibility of permanent dissolution.

The Hall of Fame was founded in 1972, but it was the opening of its new $12 million, 32,000-square-foot museum building on High Street in Olde Towne in 2005 that proved a nearly fatal blow for the nonprofit and its aim to “educate, engage and entertain sports fans across the Commonwealth.”

Less than desirable attendance levels were certainly not helped by prohibitive tunnel tolls, but the news in 2016 that city and state subsidies that covered two thirds of the museum’s $1.5 million annual operating budget would no longer be available meant the time had come for difficult choices.

With the museum shuttered and its treasure trove of jerseys, trophies and signed memorabilia mostly packed away in storage, organizers got busy hatching a plan for a new Hall of Fame model that they hope will prove an effective business “disruptor.”

“We came to our partners here in Town Center and the City of Virginia Beach and said, ‘What do you think of this idea?’” explained Hall of Fame Board Director Joel Rubin of the concept of installing the exhibits in various locations in Town Center where there is an active existing community. “People live there, they work there, they shop there.”

They worked with Town Center developer Armada Hoffler on locations and logistics and, as Rubin said at the opening event, “Virginia Beach is now the home of sports in Virginia. We’re the Hall of Fame. We’re where it all comes together.”

The plan is for the exhibits to be rotated or updated frequently and to complement and promote the walking tour with a variety of special events like the recent sold-out Hoos on First baseball program at Funny Bone Comedy Club. In exchange for the free use of the Town Center spaces, Hall of Fame organizers are encouraging visitors to support the businesses there.

“We want to give back to Town Center for giving us the opportunity to use these lobbies,” Rubin said. “We want people to come, walk around, look at [the Hall of Fame exhibit], go have lunch, go see a performance.” 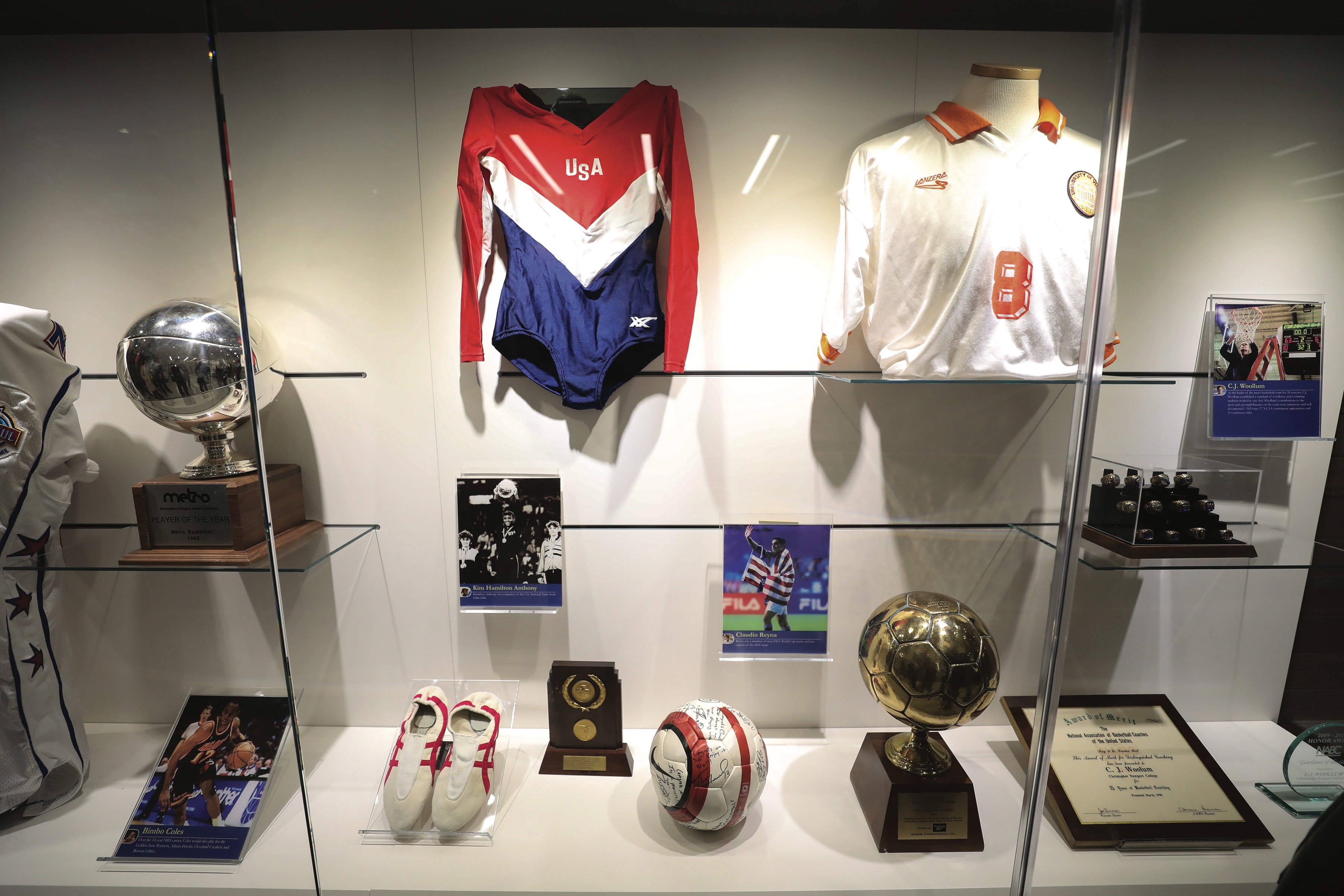 Items in the Hall of Honor exhibit from the 2017 class. 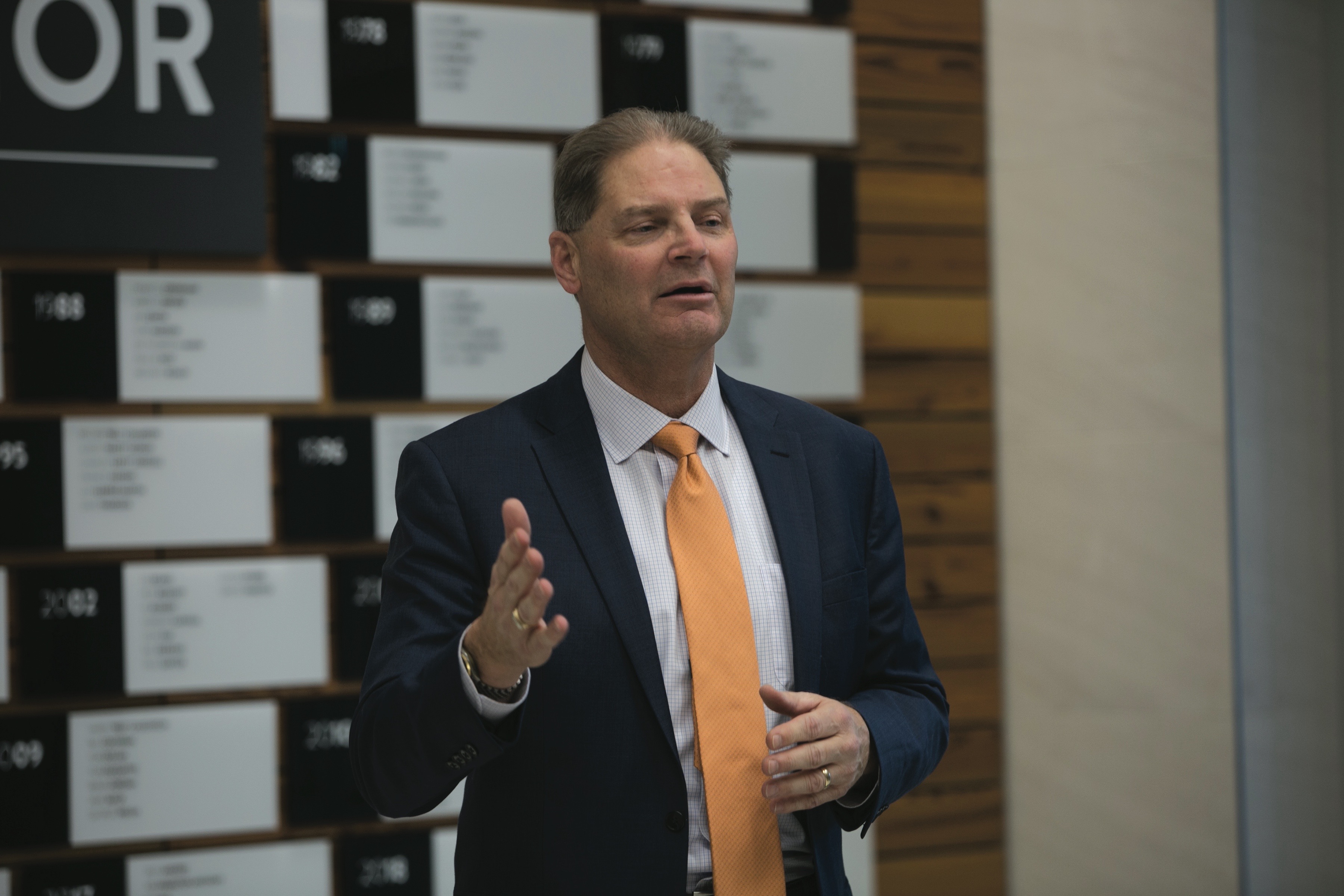 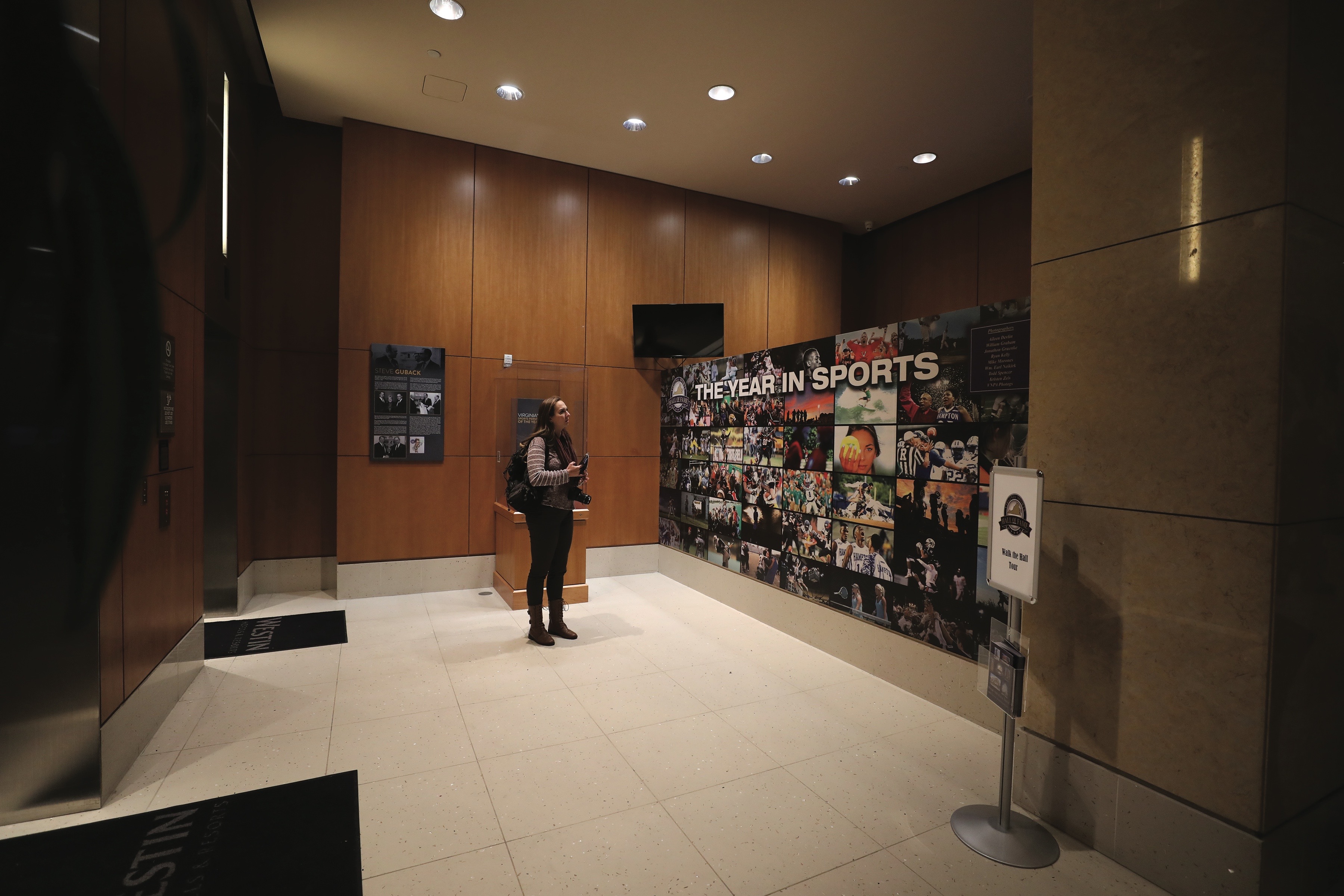 Year in Sports Photography exhibit at the Westin Hotel.

If necessity is the mother of invention, they deserve credit for thinking on their feet to save an institution that might otherwise have gone by the wayside. They say they’ve slashed their operating budget by more than half in large part by eliminating the need to operate and maintain a building, opting instead for a modest office space in Town Center and a barebones fulltime staff of three. The idea is to leverage partnerships and alleviate the need for public funding.

“We are rewriting how purveyors of history and culture—and sports is certainly part of that—interact with the public,” Rubin said, “and doing so in a way that dramatically cut costs, primarily on government and the taxpayers, the primary funders of museums and arts centers.”

In addition to financial viability, this new model has obvious benefits for patrons. Admission is free, and the exhibits can be viewed individually or as a whole without the obligation to make a day of it. The displays will change regularly so there is always something new to see, and the possibilities for unique Hall of Fame-related events and programs are many, whether in Town Center, around the region or elsewhere in the state.

There are also drawbacks. Museum spaces provide a sense of cohesion and grandeur that you’re just not going to get from an office lobby. And visitors who don’t happen upon the displays and decide to follow the tour as directed may not know they are there. Hall of Fame organizers understand they are in unchartered territory.

“We decided to take this leap,” said Webb, “and this really is a leap of faith because we talked to several museums around the country about this concept of a Walk the Hall, and we could not find anybody in the country that was doing this type of model.”

Gary Roberts, professor of government and director of the Master of Public Administration program at Regent University, said he had not heard of this type of flexible setup being used by a museum before but that it is in keeping with changes in the industry. “It remains to be seen how well it will work, but I think it’s a worthy effort that’s innovative and creative and certainly worth trying in order to leverage scarce resources in this area,” he said. “It’s consistent with the type of incubator approach and trends that are happening with nonprofits that are taking a multi-organizational, collaborative approach to service delivery.”

A key challenge, he pointed out, will be in finding the energy and resources needed to create public awareness. The synergy created by the Town Center location, with its busy restaurants, venues and steady foot traffic should help with that. 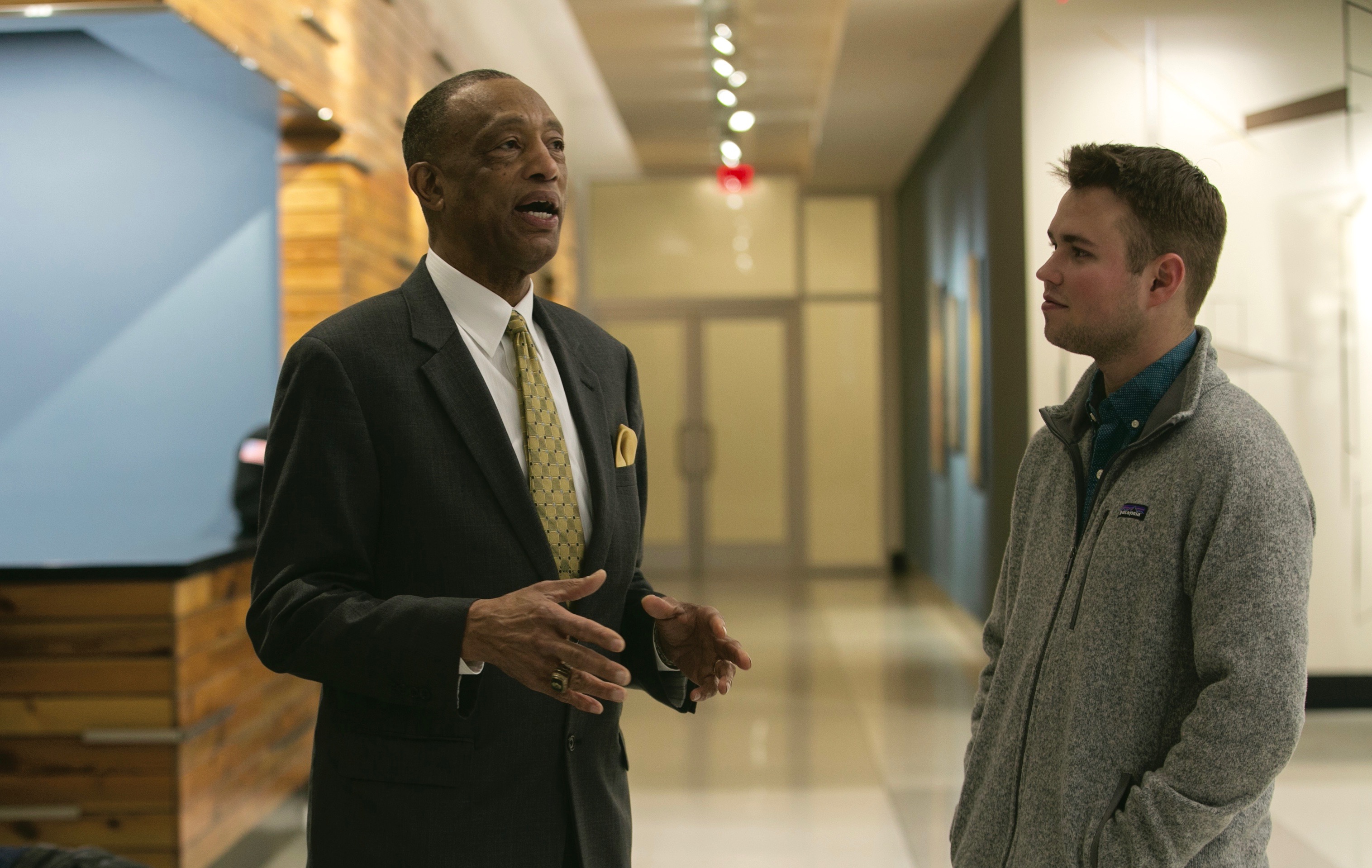 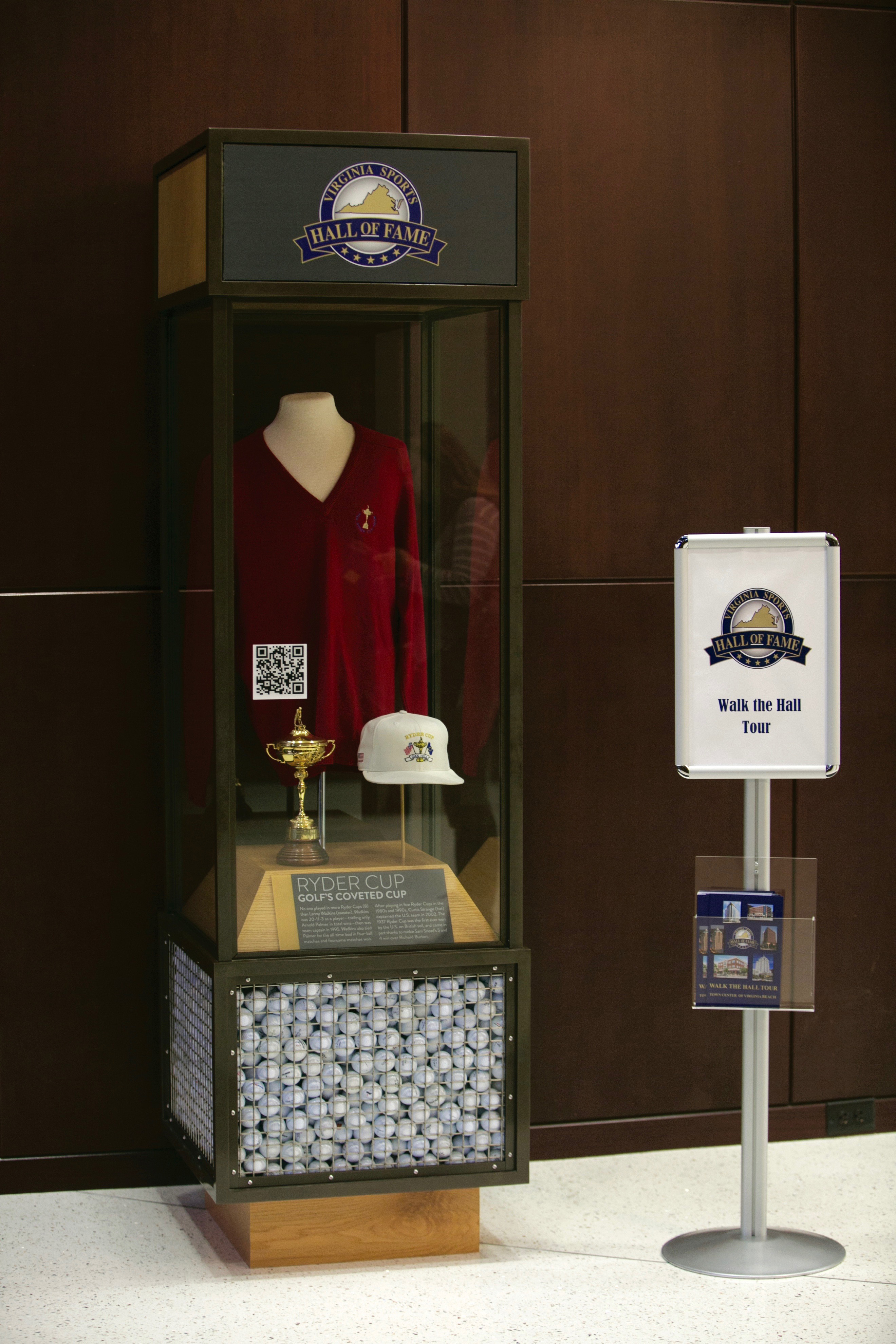 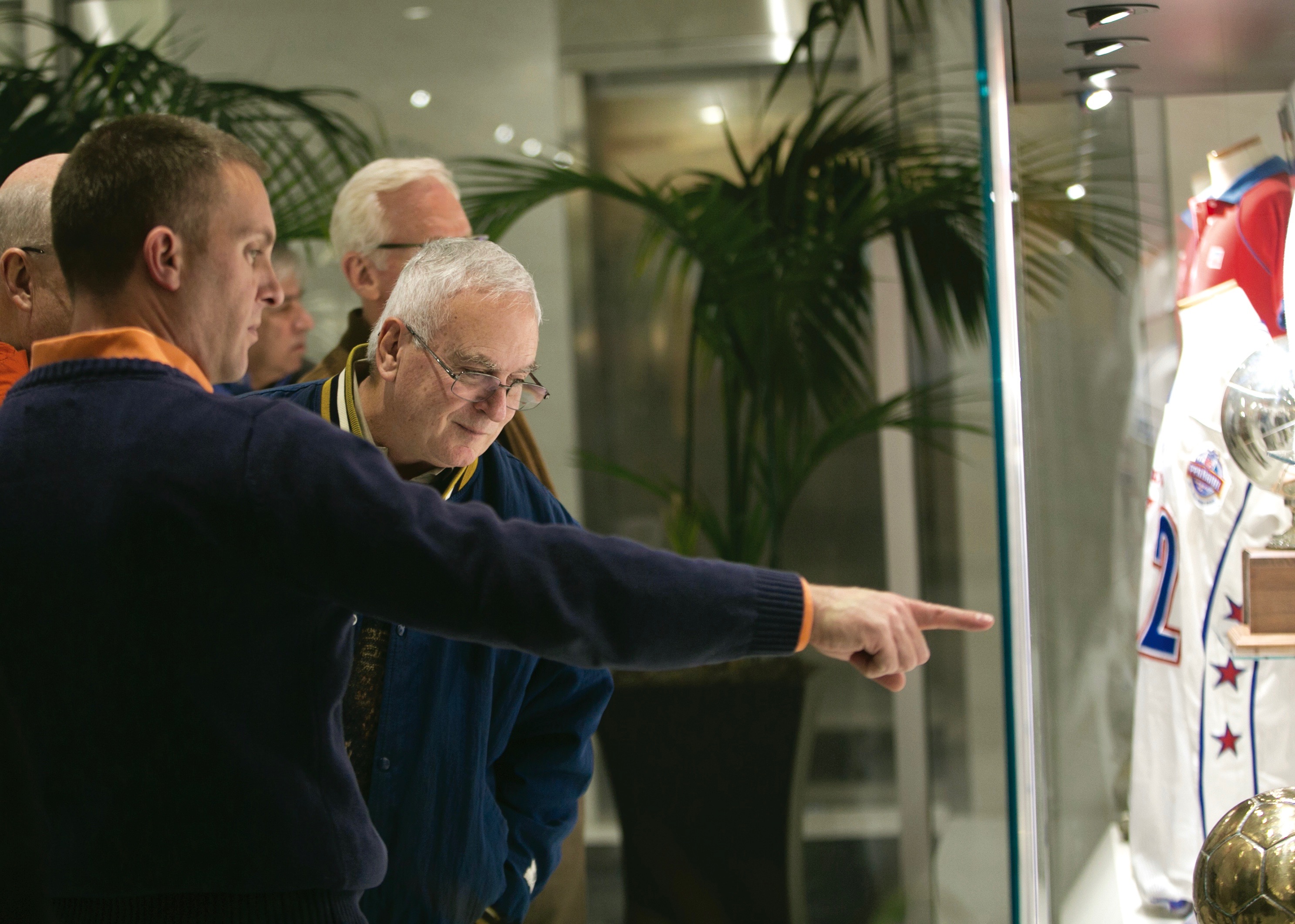 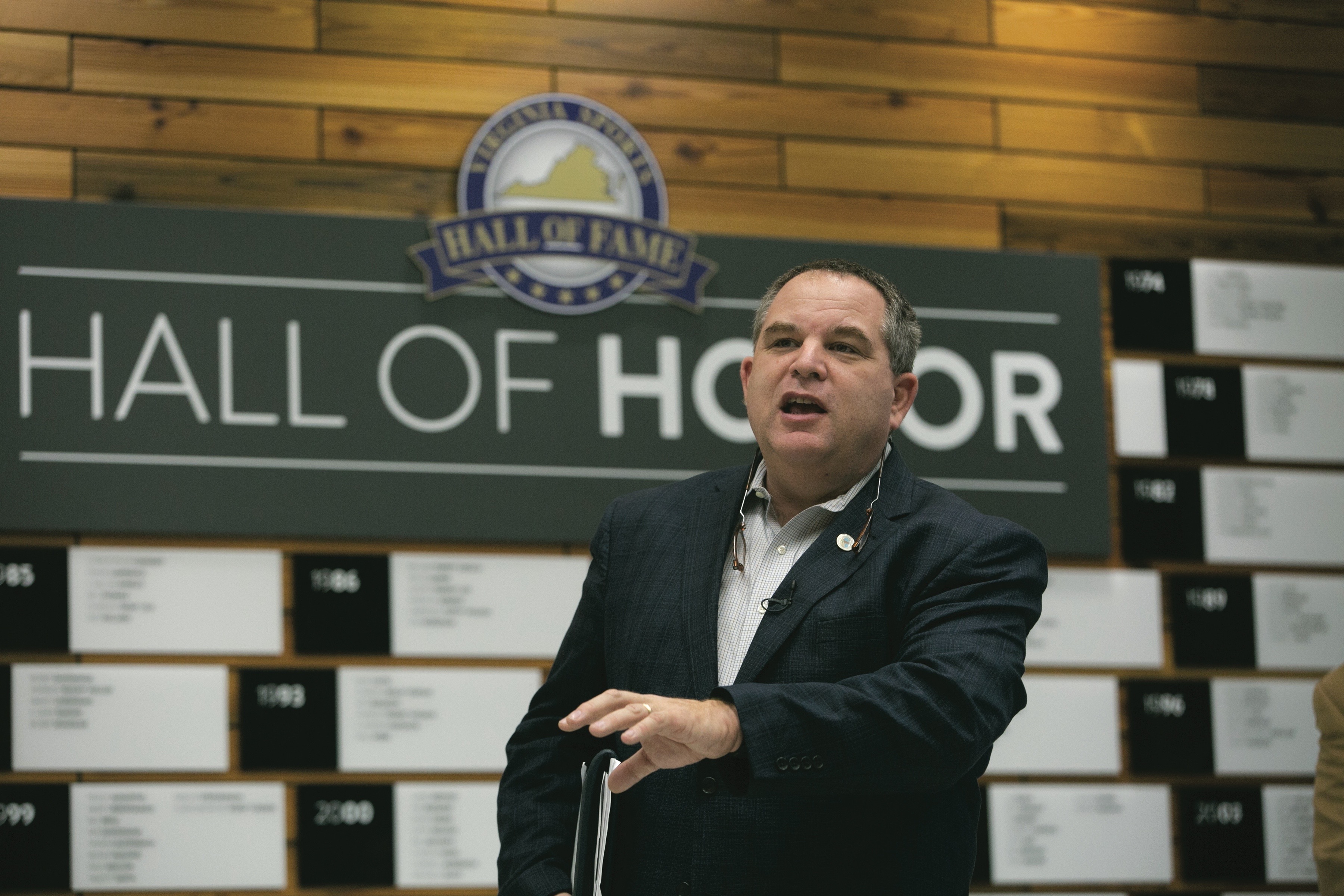 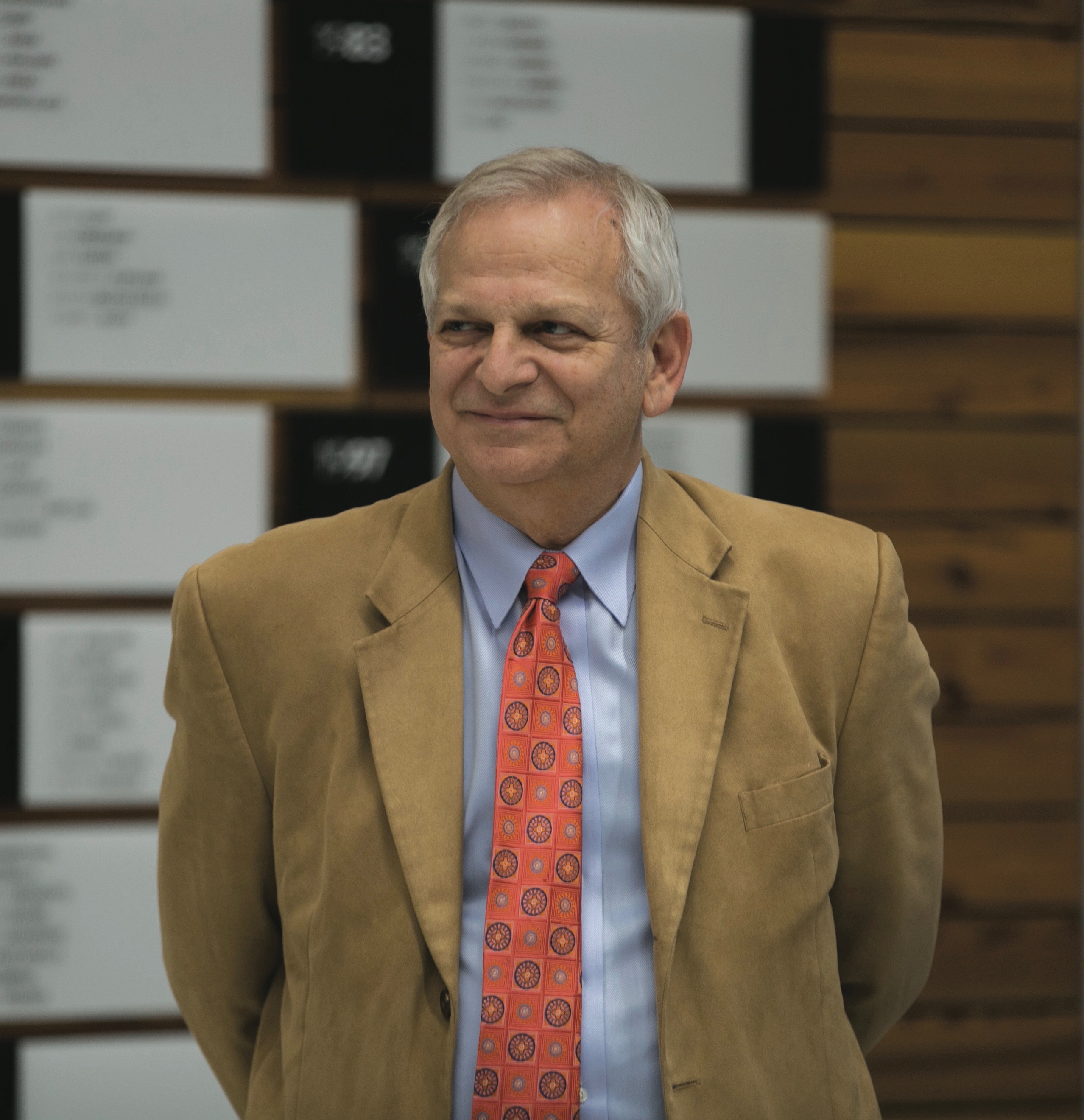 The annual Virginia Sports Hall of Fame Induction Weekend for the Class of 2018 on April 6–7, culminated with the Induction Ceremony at the Sandler Center for the Performing Arts. This tradition had a new twist. Rather than the sit-down banquet format they have done in the past, it was a lighter, more interactive program in a theater setting, which encouraged ticketed attendees to stay in Town Center after and enjoy dinner and the other nearby amenities. 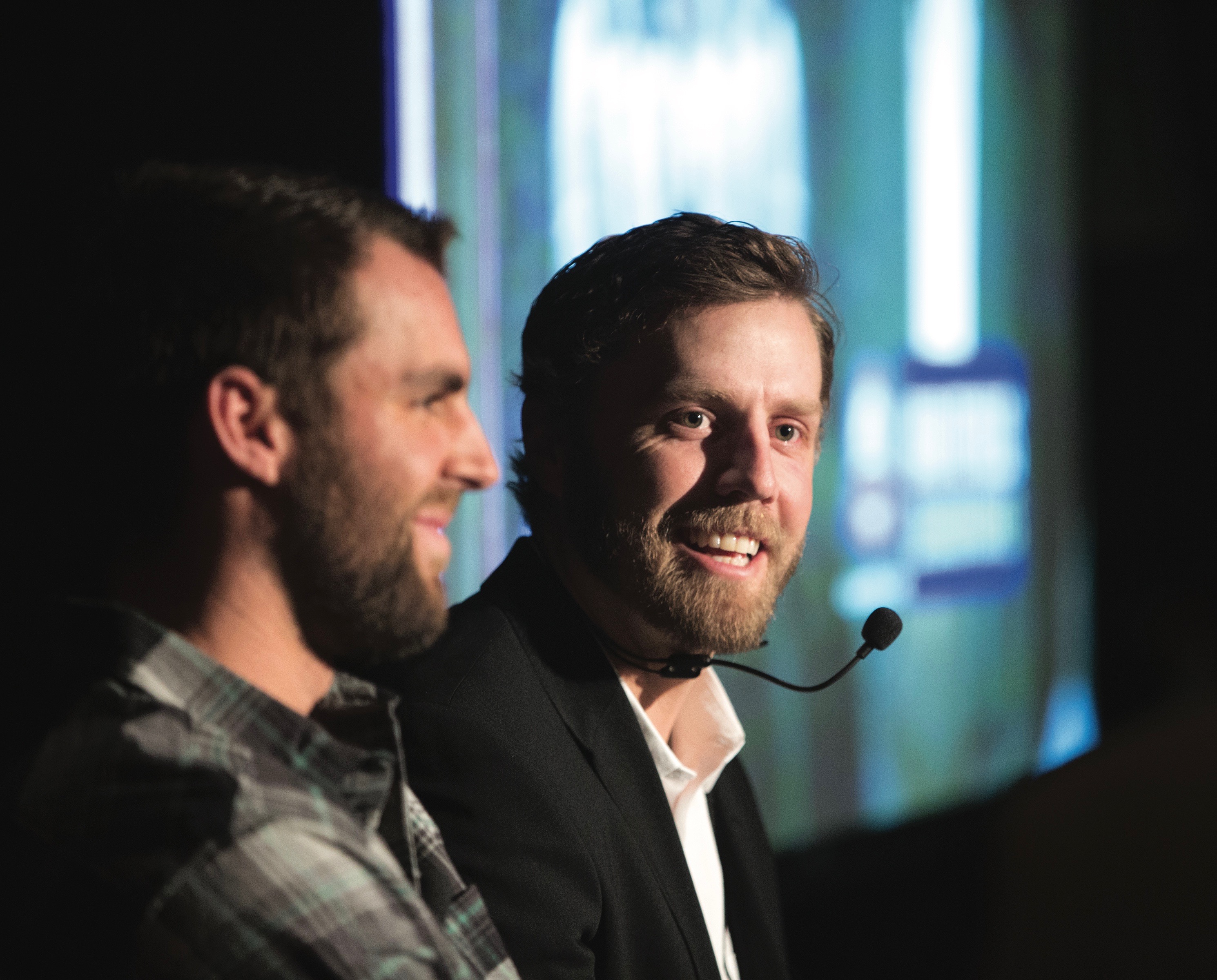 Chris Taylor of the LA Dodgers and Mark Reynolds of the Colorado Rockies, both natives of Virginia Beach and former baseball stars at UVA. 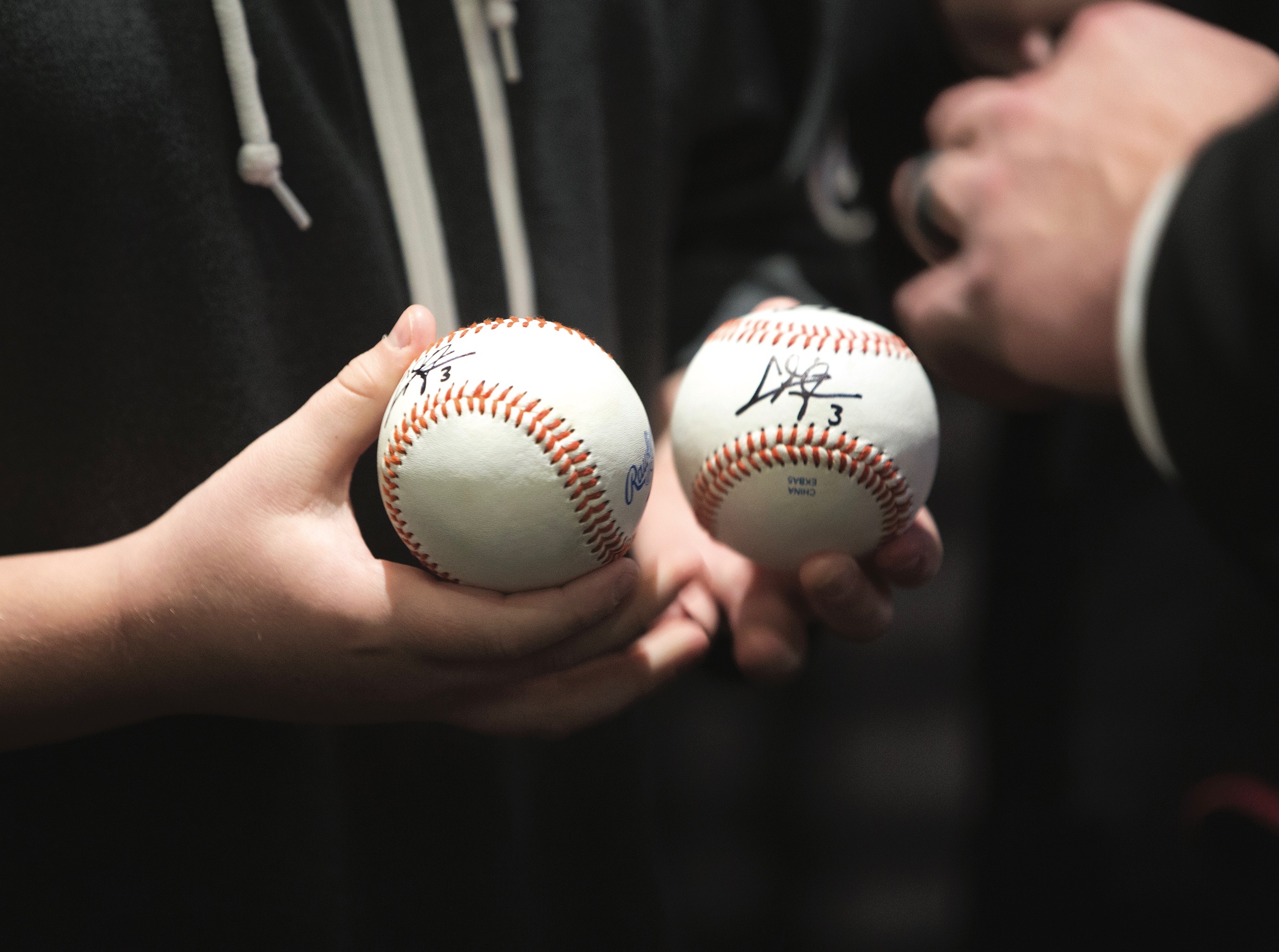 Baseballs that a fan brought to the Hoos on First event, signed by Chris Taylor and Mark Reynolds. 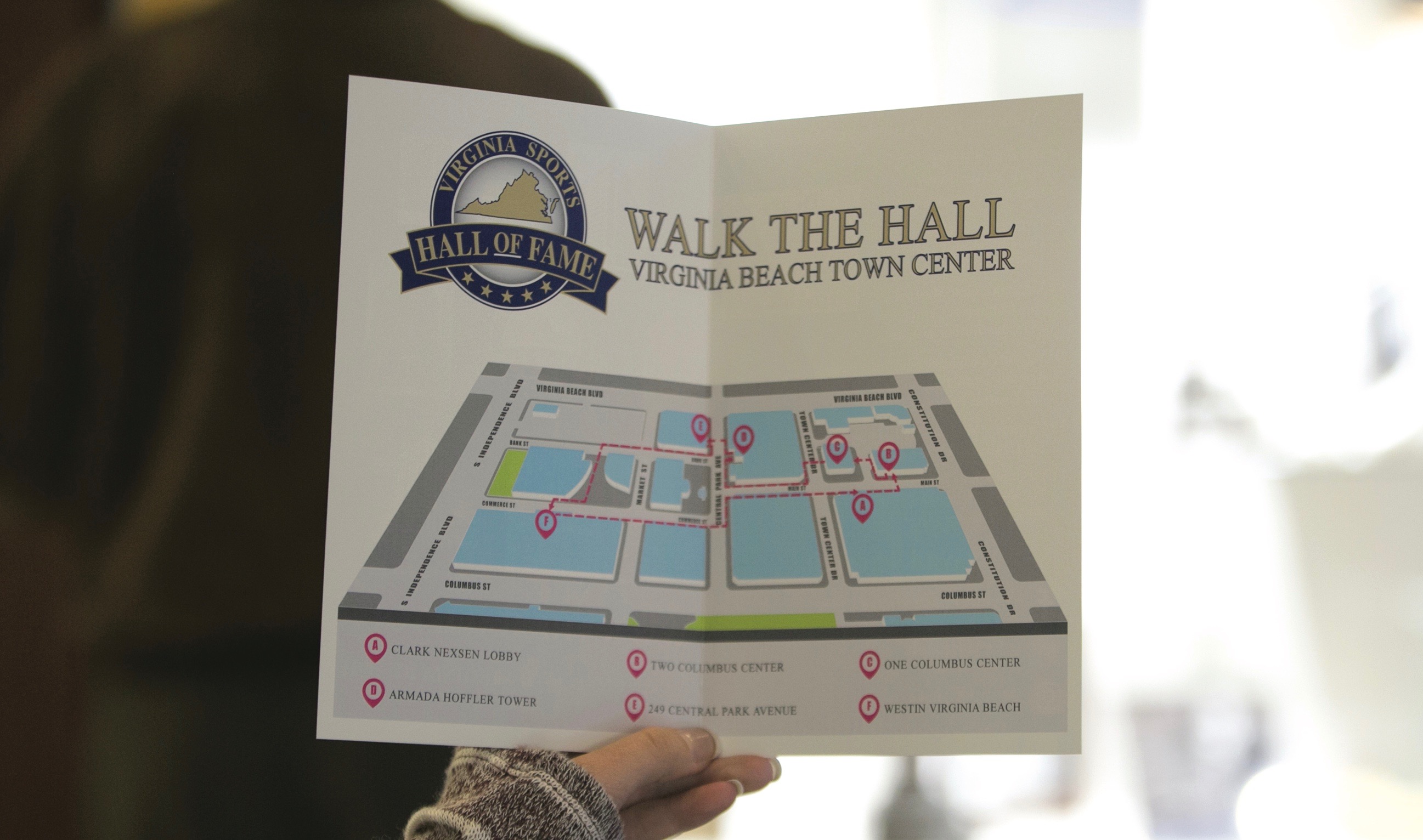 Map of the Walk the Hall tour at Town Center.

“In a time when positive role models are so important to our youth,” says 1998 inductee and national Hall of Famer Kenny Easley in the tour video, “visitors of all ages can learn about the great accomplishments of these men and women.”