How locally based STIHL channeled power, precision and speed to discover a unique marketing opportunity in the “last true motorsport”

About six years ago Roger Phelps was sitting in a conference room at STIHL Inc.’s Virginia Beach headquarters, interviewing 30-something engineer Andy Findlay.

“I was working on a series of company profiles called, ‘Real People,’ which were meant to give customers a glimpse into the lives of our employees,” says Phelps, STIHL’s corporate communications manager. He started with the standard what-do-you-do-and-why, then threw a curveball: What’s something people would be surprised to know about you?

“I race airplanes,” said Findlay with a laugh.

Phelps thought it was a joke and followed suit. But Findlay was serious. He spent most nights and weekends working on a single-propeller, sport-class airplane, which he flew at the annual Reno National Championship Air Races.

“I was like, ‘Woah, this is surprising,’” says Phelps, sensing he’d struck marketing gold. “I said, ‘Start at the beginning and tell me everything!’”

Findlay grew up in an Idaho ski town, where he developed an early need for speed as a competitive downhill skier. An appreciation of applied mathematics led to snowmobile racing as a teenager.

“The sport combined two of my favorite things, speed and mechanical engineering,” says Findlay, now 38. He and friends worked tirelessly in his dad’s garage, “fixing our machines—which we were constantly breaking—and trying to make them go faster.” 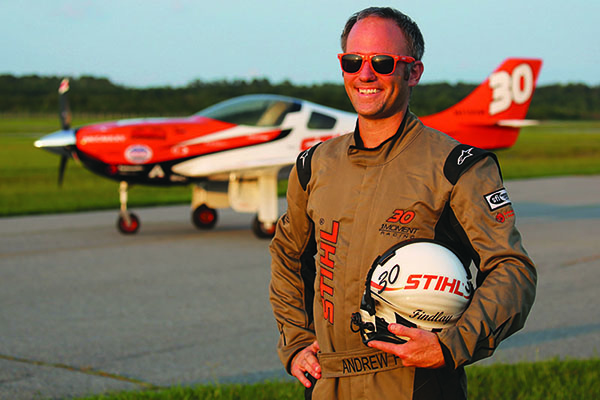 Findlay attended his first Reno Championship at age 15. His father bought tickets hoping to bolster young Andy’s interest in extreme engineering. The event was the oldest and most prestigious aerial competition in the world—and with sport planes reaching speeds of nearly 400 mph, the fastest. Furthermore, there were virtually no rules around modifications. Sport-classers simply had to field a propeller-driven, amateur-built, general aviation model with an engine under 1,000 cubic inches in size. Beyond that, it was open season.

Watching groups of up to eight racers vie for position around the 7-mile course just 200 feet off the ground left Findlay awestruck. “It was like nothing I’d ever seen,” he says. “I told my dad, ‘That’s gonna be me someday.’”

To make it happen, Findlay took flying lessons while earning a degree in mechanical engineering at the University of Idaho. He graduated and took jobs testing engines for companies like ATV, snowmobile and jet ski manufacturer, Bombardier Recreational Products. By the time he landed at STIHL in 2012, Findlay was an accomplished pilot and engineer—and had invested $125,000 in a semi-functional Lancair Super Legacy airplane, later christened One Moment.

Findlay finished restoring the plane and completed training in time for the 2014 Reno Air Races. His debut wasn’t great. “What can I say? We didn’t come in last and we didn’t get lapped,” he jokes.

While champion Jeff Lavelle averaged speeds around 400 mph, Findlay managed just 350. Being truly competitive would require sponsorship. But that felt like a pipedream—at least until the interview with Phelps.

“Andy’s passion was infectious,” says Phelps, who has been with the company since 2001 and long overseen development around the popular STIHL Timbersports Series. “Five minutes in I was thinking, ‘This is an opportunity, we have to do something with this.’” 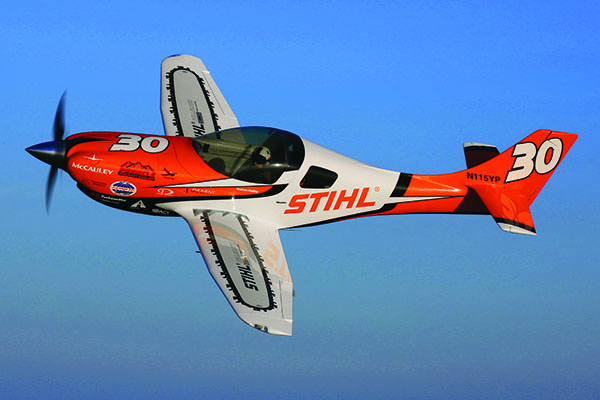 The partnership started simply, with a 10-by-10-foot STIHL booth at championships, funding for minor improvements and a paintjob for One Moment. But what Phelps saw at the 2015 championships inspired bigger plans. Participants and spectators numbered upward of 150,000, even though online presence was virtually nonexistent, and the races were untelevised. When Phelps discovered title sponsors were planning to stepdown in the near future, he pitched STIHL execs on a major sponsorship. They responded with an overwhelming yes.

“Now, you might say, ‘Why would an outdoors company want to sponsor an air race?’” says Phelps. “Well, if you look at the themes—power, precision, speed—the parallels become obvious. The air racing demographic has a deep appreciation for high-end engineering, performance and reliability. Most are relatively affluent, own homes, run businesses. … In short, they’re ideal STIHL customers.”

The first STIHL National Championship Air Race was held in Reno in September 2017. Leading up to the event, Phelps worked with officials to launch a new website and strike live coverage deals with NBC. Meanwhile, Findlay relocated operations to a deluxe hangar at the Hampton Roads Executive Airport. With STIHL’s notoriety and financial backing, he was able to build a team that boasts some of the region’s top aeronautical wizards.

Team One Moment has since hosted a hit parade of contributing industry innovators, including Google X engineer Andre Prager, and local thermodynamics guru Mark Vos. But nobody’s doing it for money—all work day jobs and volunteer. They value the project because it lets them think outside the box and push the limits of engineering and experimentation.

For instance, custom designed twin turbochargers, propellers and a system that sprays coolant directly on cylinders brings more than 800 horsepower—a value that’s 160-plus percent above stock. These and other mods helped Team One Moment win sport-class championships in 2018 and 2019, and set a world record by achieving 409 mph.

Findlay and Phelps both say the partnership has been a dream come true.

“Where else could I work with some of the most talented mechanical minds in the world to Frankenstein a civilian plane into breaking air-speed records?” says Findlay, grinning.

The answer is, nowhere. And if it weren’t for a question aimed at shaking things up during a routine marketing interview, it might not have happened.

The 2021 STIHL National Championship Air Races and Air Show are scheduled for Sept. 15-19 in Reno, Nevada. Learn more at AirRace.org.