The story of Doumar’s goes back as far as the late 1800s. Syrian immigrant Abe Doumar came to the United States to make a better life for himself and his family. He became a traveling salesman and would follow the state fairs up and down the East Coast, going as far west as the Mississippi River. “He would go on the trains and carry gadgets with him, something he could carry in a suitcase to sell,” says Thad Doumar, Abe’s great nephew and current owner of Doumar’s in Norfolk. “He was just a great, natural salesman.”

Abe had 15 brothers and sisters in his family and was trying to make enough money to bring them all over the United States. According to Thad, back then you had to have a sponsor to come to the U.S. Abe had a sponsor, and once he got here he would sponsor a brother or a sister to come over, one at a time. “Basically, you had to guarantee the United States government that you would support the person you were bringing over and they wouldn’t be a drain on the government or society,” says Thad.

Fast forward to 1904. Abe was selling paperweights at the St. Louis World’s Fair—or the Louisiana Purchase Exposition, as it was called back then. When he got off work one evening, he was watching an ice cream vendor who ran out of dishes to serve his customers, and there was a large line at the stand waiting. He was just about to turn them all away when Abe stepped in. Nearby there was another vendor making thin cookies on a waffle iron. He was serving them with whipped cream and selling them as desserts. 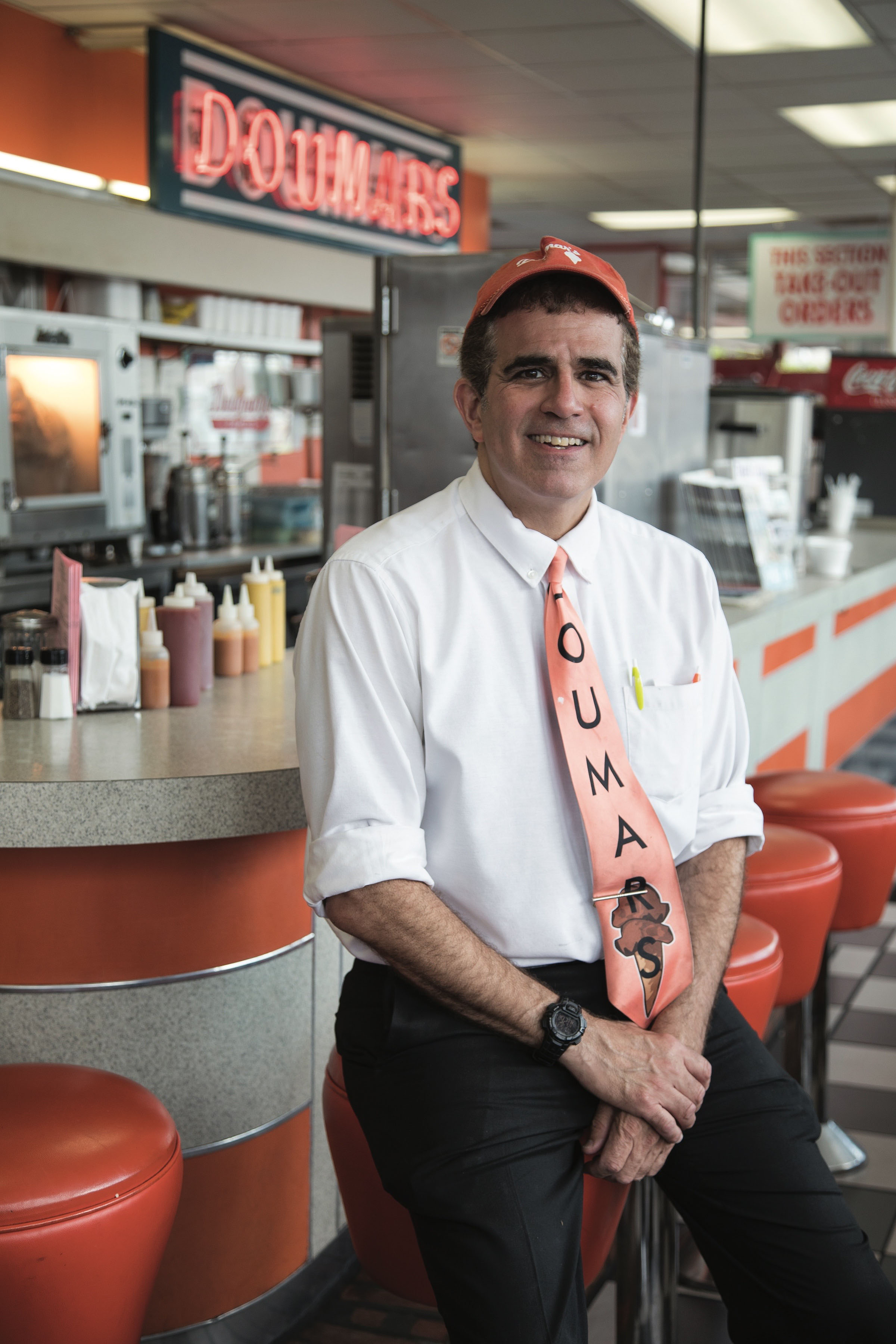 Thad Doumar is a third generation owner of Doumar’s and has been working at the restaurant since he was a pre-teen.

“My Great Uncle went up to the waffle man as a fresh cookie was coming off the iron, rolled it into a cornucopia shape, and put ice cream in it,” says Thad. “He said to the two men, ‘You fellows need to combine your operations.’ The ice cream man was so impressed, he said he’d do it only if Abe would join him. So, at that point, the souvenir man, the ice cream man and the waffle man became partners, and they were very successful.”

Back then the waffle iron was only capable of making a single waffle at a time. Abe designed a machine to make it possible to cook four at a time. That machine is still used today at the Norfolk location.

With this new machine in hand, Abe went to the most famous place he could think of—Coney Island—and set up a stand there. Eventually, he was doing well there and brought in a brother to run that stand. Then he replicated himself down the East Coast, going to all of the resorts he had visited as a traveling salesman, and set up stands in each location, then bring a brother, sister or cousin in to run it, in effect, giving each of his family members their own business to run.

In 1907, Abe came to Norfolk and opened a stand at Ocean View Amusement Park, which was immensely successful. Abe brought in his brother, George, to run the stand, then settled in Norfolk to manage his brothers and sisters at their various locations.

In 1933, a hurricane destroyed Ocean View Park. It was rebuilt, but then destroyed again two years later by another hurricane. George decided that they needed an operation that could run year-round, so he went to work looking for the highest natural land near Downtown Norfolk. He bought land on the corner of 19th and 20th streets on Monticello Avenue—the site of their current location. He started selling barbecue sandwiches so he could have revenue during the winter months, then added ice cream back in during the warmer months.

“We got into the barbecue business for this reason,” says Thad. “In the south it’s kind of a cultural thing, while a hamburger was considered more of a northern item. But hamburger has a limited shelf life. If you cook it, you’ve got to serve it or throw it away. Barbecue sat in a pot. If you didn’t use it right away, it might even get better as it cooks overnight.” 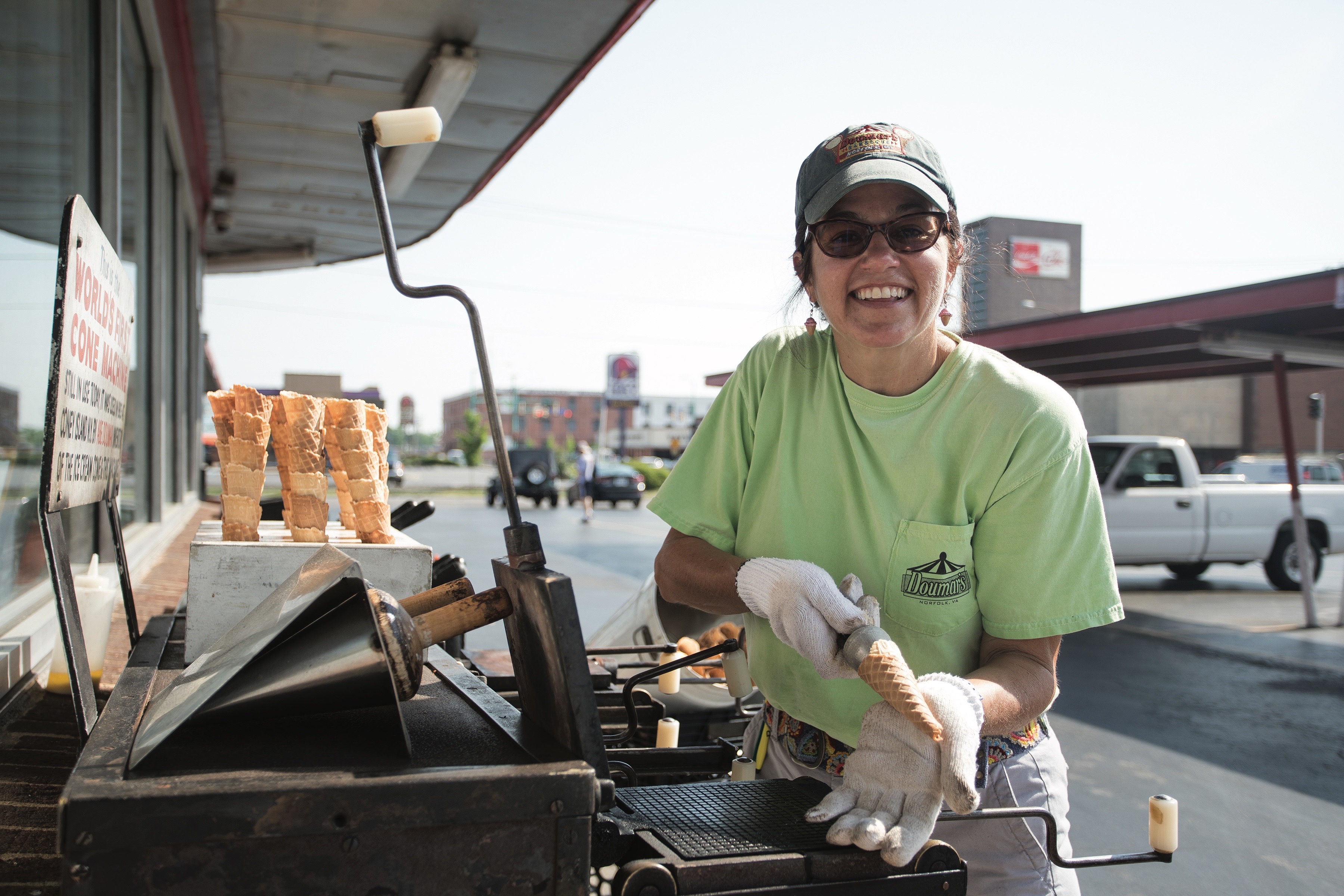 Kathy Doumar Windley learned how to bake ice cream cones at age 11 and demonstrates here the proper way to roll a cone on the very machine that started it all. 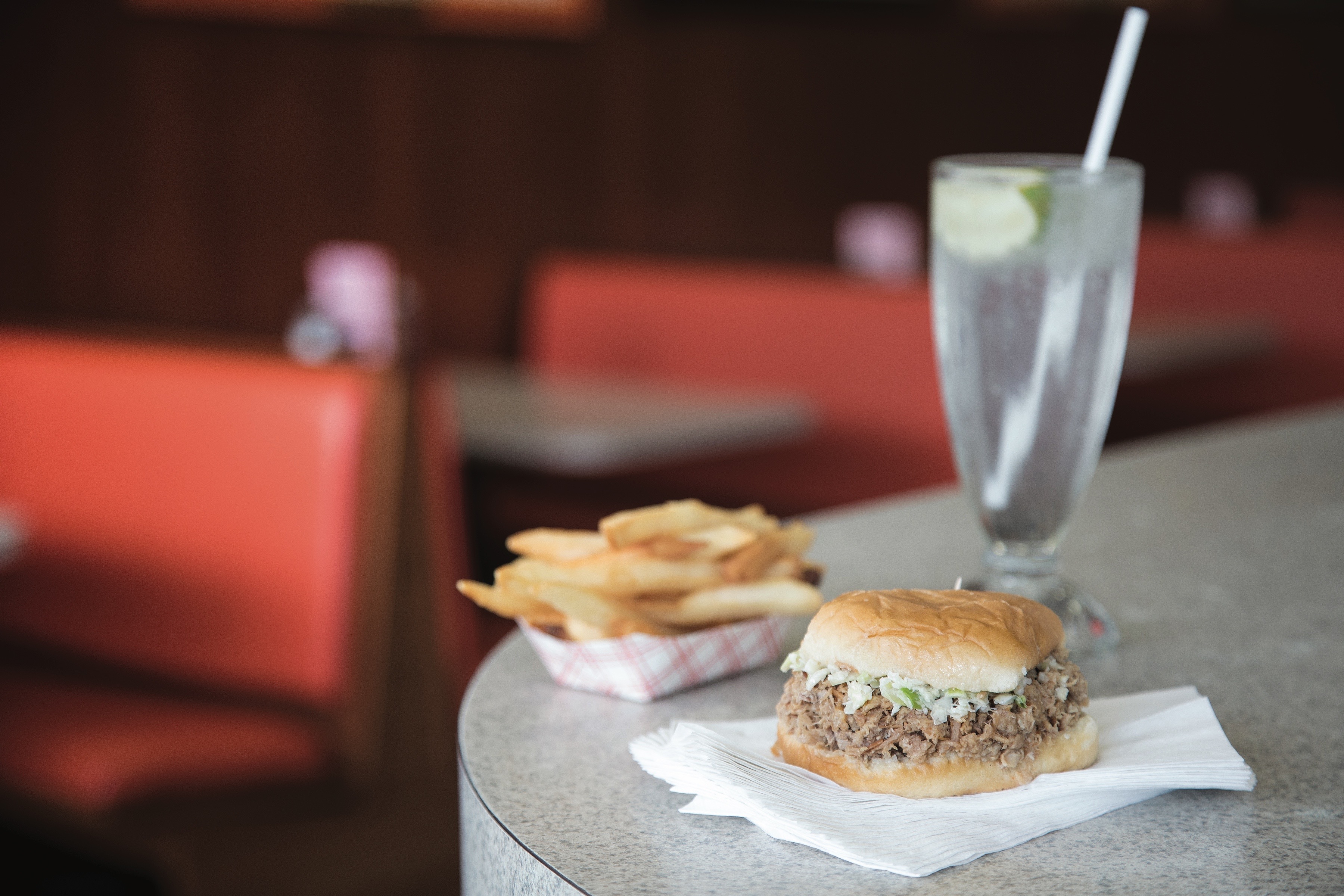 The restaurant started selling barbecue sandwiches to have revenue during the winter months. The sandwiches, along with Doumar’s signature limeade, are now staples at the Norfolk diner. 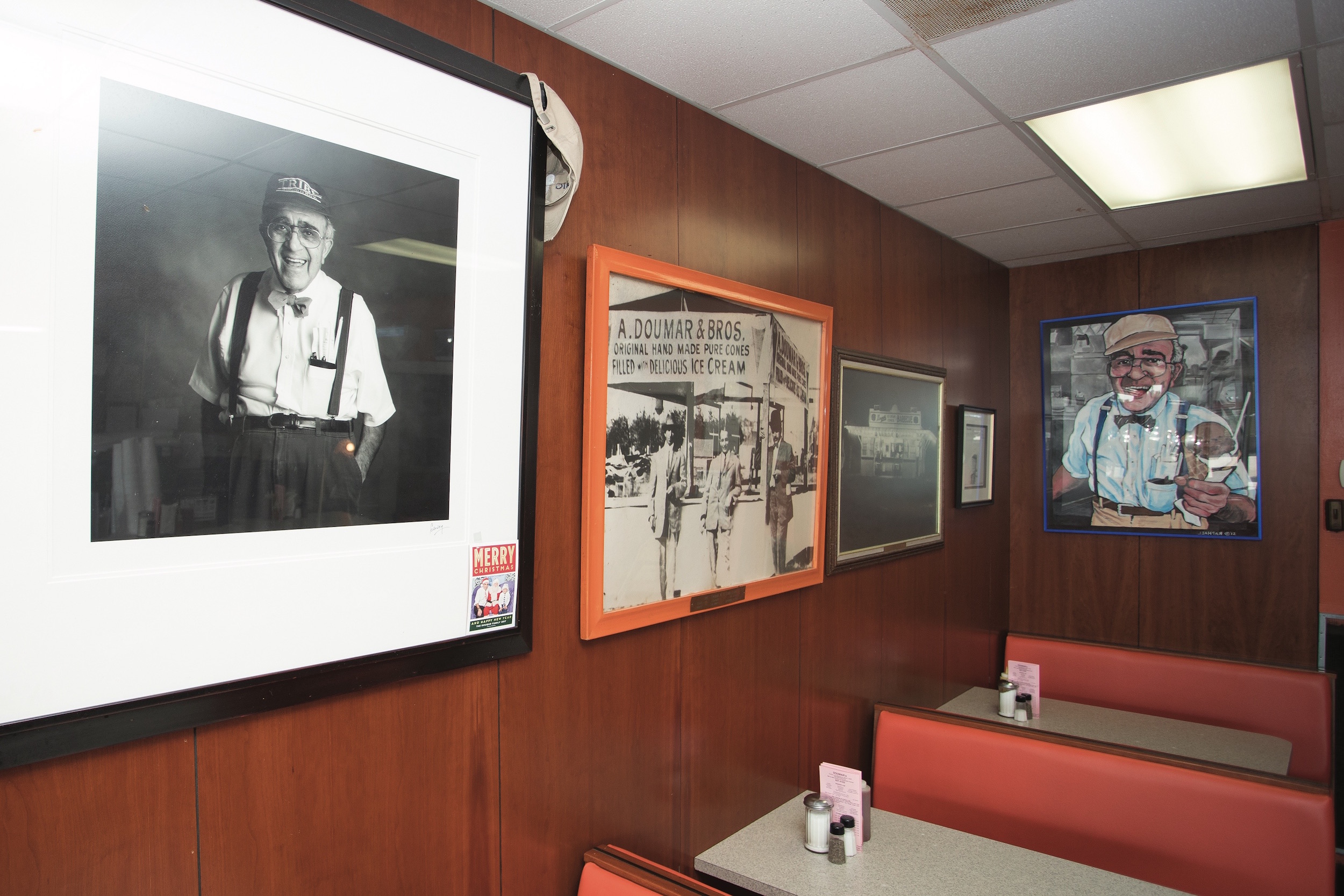 Memorabilia on restaurant walls pay homage to Doumar’s history, as well as former owner Albert Doumar (Thad’s father) who could frequently be spotted wearing suspenders, a bowtie and an orange cap that said Big Al. He died in May 2014 at the age of 92. 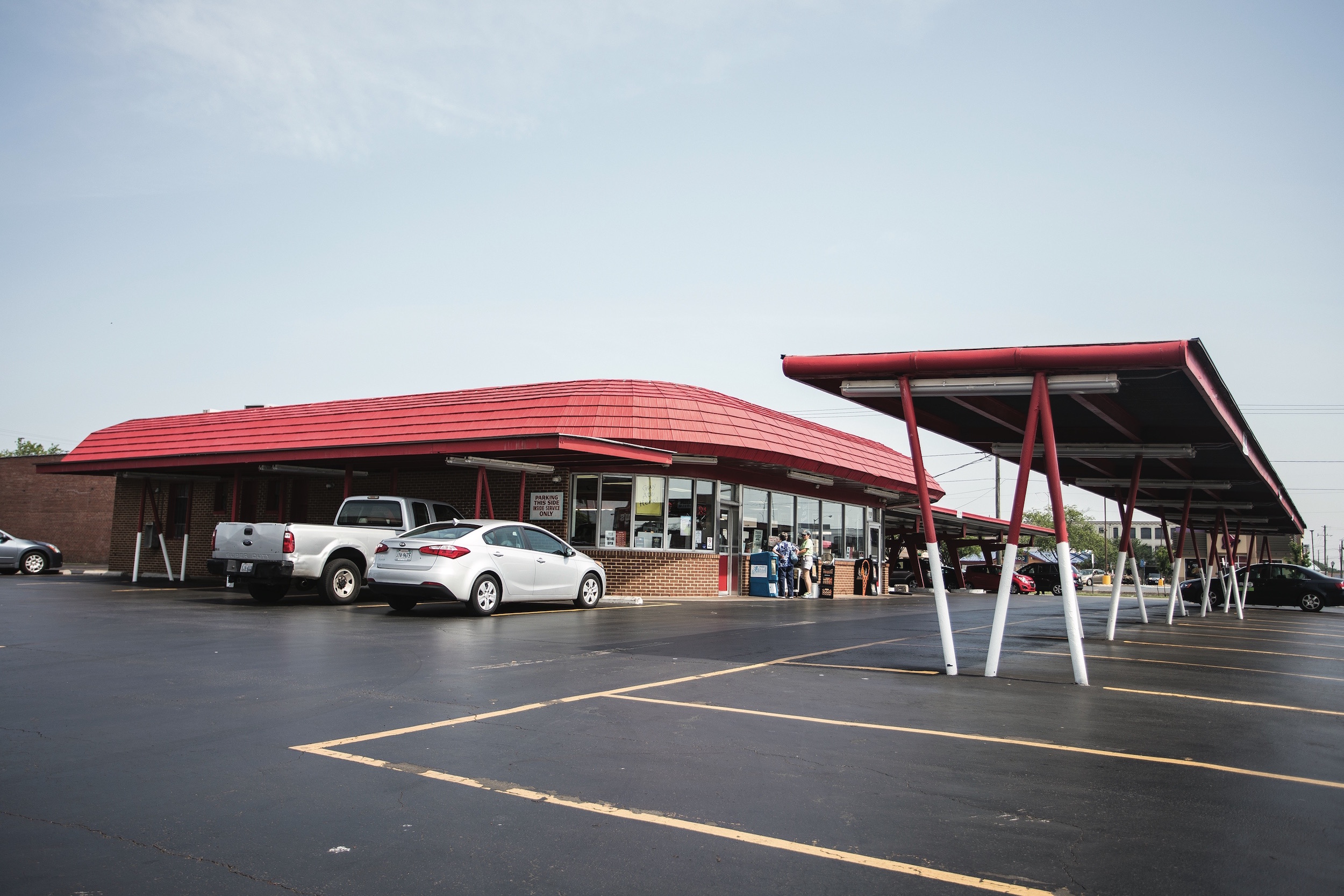 Doumar’s is one of the last remaining classic drive-in restaurants around. 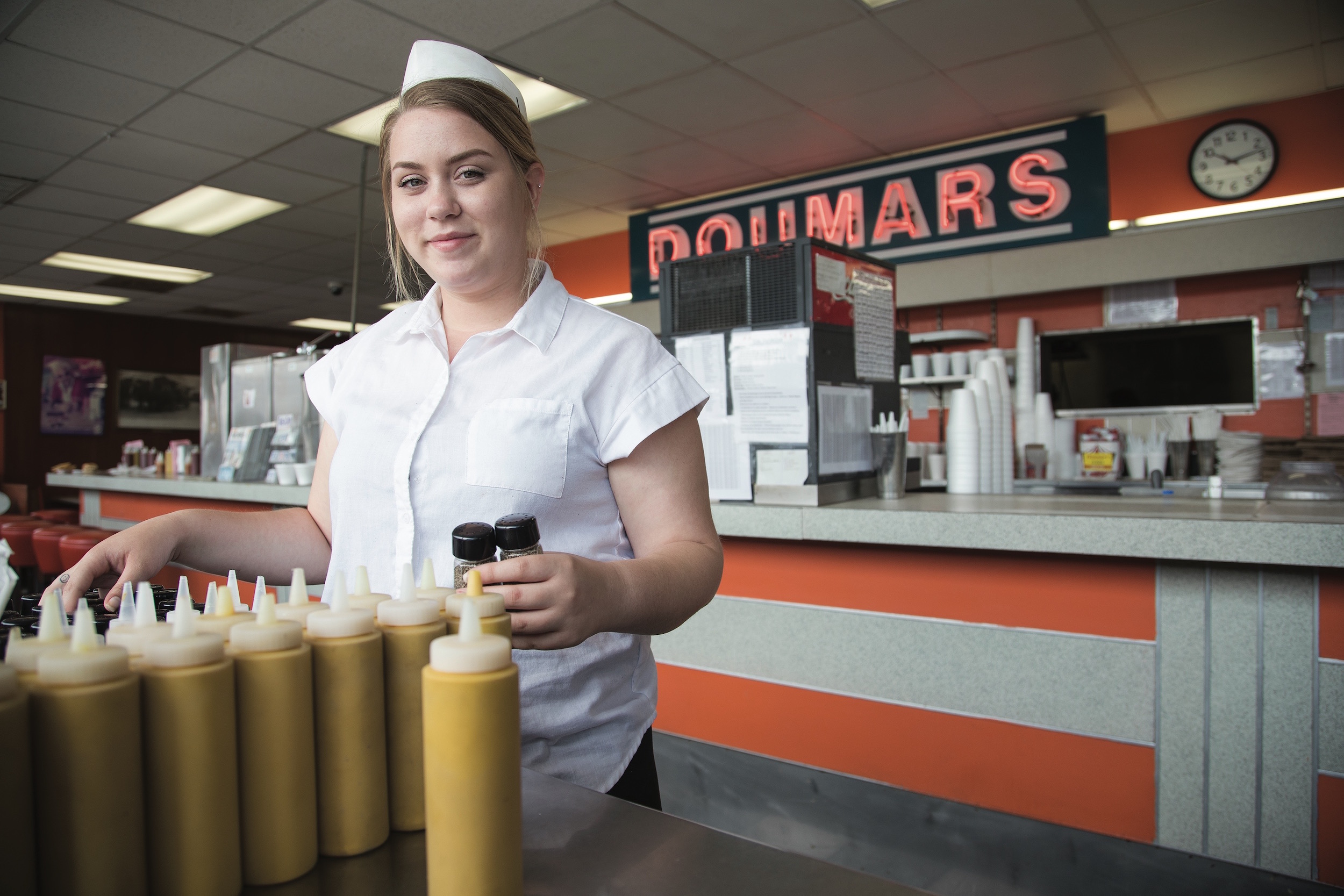 Doumar’s maintains a retro atmosphere, down to the soda-jerk cap as seen on Shelby Pattee, who manages the restaurant’s drive-in.

Today, Thad is the third-generation owner, running the restaurant with his business partner, Randy, who also happens to be his brother-in-law. His sister, Kathy, also helps out part time. And Thad doesn’t plan on going anywhere else in the immediate future.

Thad’s father, Albert, started working at the restaurant full time after he got out of the service in 1946. Like his father, George, Albert made running the store his mission in life. “Dad never took a vacation,” says Thad. “He worked at the restaurant every day for 60 years. He married the love of his life, and they were a great team. I once asked him how he had been doing this every day for 60 years and he told me, ‘One day at a time.’ I know it sounds trite, but it’s true.”

As for the Doumar’s quality that locals have come to know and love over the years, they plan to keep that tradition going, too. “As far as the menu goes, we don’t change that a whole lot,” says Thad. “In the last few years we came out with an eggnog shake that was only available for about six to eight weeks around Christmas. People looked forward to it so much and it was such a drive for us. So about three or four years ago we came out with a pumpkin shake for the fall, which created its own audience. More recently we’ve added a cheesecake shake to take over once the eggnog shake is gone. So, we tweak around the edges a bit, but in general, we’re not changing a lot. If it’s not broken, we don’t fix it.”

Operation Smile to be Featured on CNN’s Champions for Change