Even though about 90 percent of Virginia Beach residents believe that tourism benefits the area, there are still some that may view tourists as a bit of an inconvenience—adding additional vehicles to already congested roadways and crowding the beach and boardwalk along the resort area. But for neighborhood businesses and the City of Virginia Beach, tourism is a major factor for the local economy—to the tune of more than $1 billion.

Therefore, to make the area even more attractive to local and out-of-town visitors, Virginia Beach has several initiatives currently in play that are expected to not only boost summer tourism but also help to bring in more people during the shoulder months—especially during the winter when visitation numbers are much lower and additional revenue outlets will be greatly appreciated. 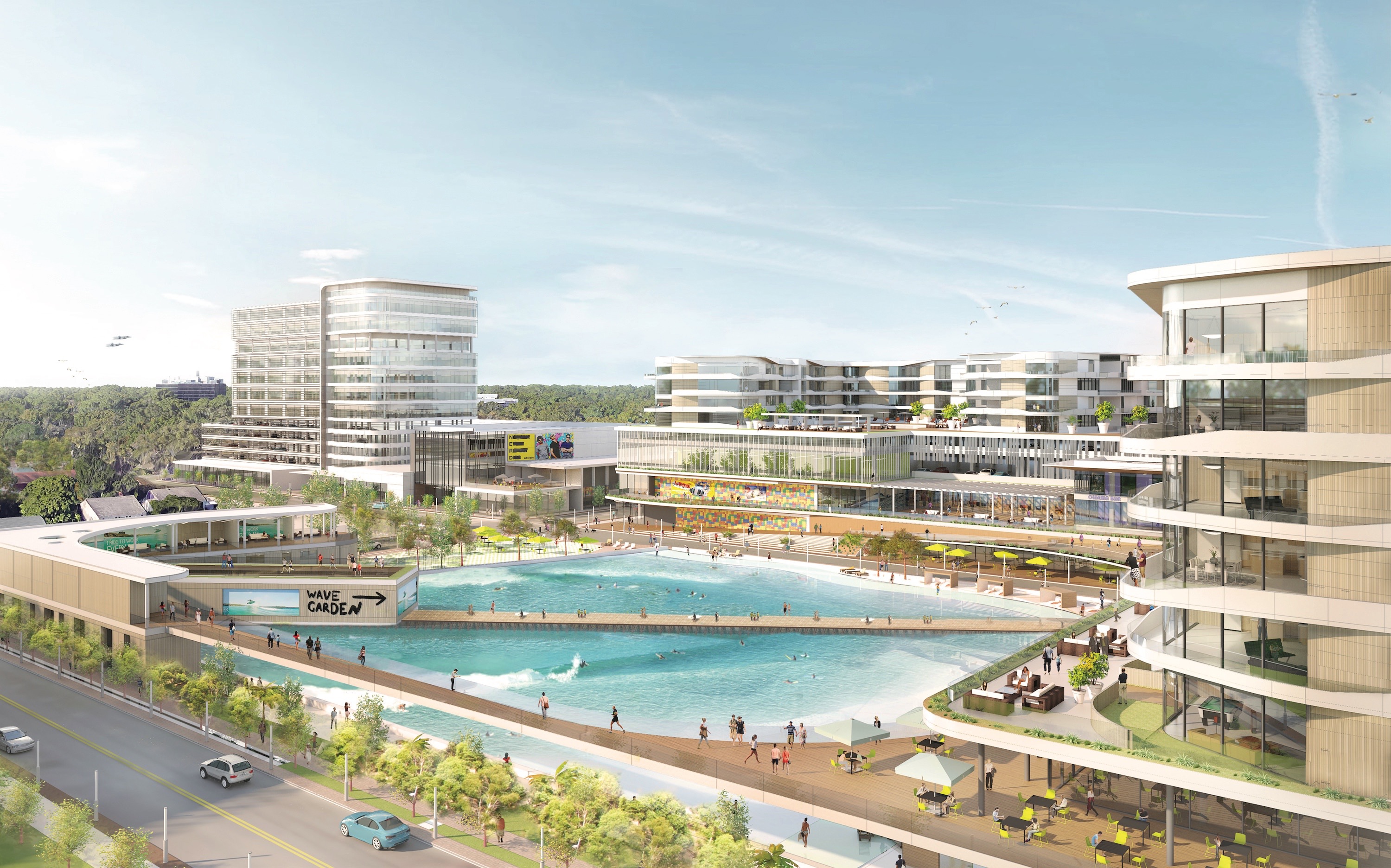 Three major initiatives that are currently in the works include a new sports center located in one of three sites near the Convention Center, a new 880-foot cement pier and revitalization of the current Dome site between 18th and 20th Streets that will include a multi-block, mixed-use development featuring a 3,500-seat live entertainment performance venue, new and unique retail shops, experiential restaurants, apartments, Class A office space and a year-round surf park, called “The Wave,” that long-time Virginia Beach resident and international superstar, Pharrell Williams will be involved with in terms of planning, designing and branding. These initiatives will not only make Virginia Beach more attractive as a vacation destination; it is also projected to add hundreds, if not thousands, of jobs to the local economy.

How are these projects intended to increase tourism, and why are they crucial to the area’s success? “I think first of all, new product is critically important just to refresh the destination to remaining competitive and be sustainable,” says Brad Van Dommelen, Director of the Virginia Beach Convention & Visitors Bureau. “The sports center itself, as far as a new product, is kind of a market maker in and of itself. It truly is a facility that ‘if you build it they will come.’ We have a huge amount of interest and demand for sports tourism events here. So that facility will drive lots of new business to Virginia Beach and primarily in the non-summer months, which is obviously when we need it. But in general, just having a new product is critically important to remain competitive as a destination. As all destinations evolve, they re-invent themselves, and tourism is an incredibly competitive industry. The dollars that tourism brings to a community are sought after by many other communities, and we need to be competitive to attract them. In order to be competitive, we need to refresh our product and we need exciting elements that are going to be relevant to new generations of travelers looking for different types of experiences that will entice them to spend their discretionary dollars with us, as opposed to going elsewhere.”

Getting In The Game

According to Van Dommelen, sports tourism—tourism specifically generated by hosting large sporting events and tournaments—is a $10 billion industry that continues to grow by 10 percent each year. By creating a space specifically designed to host these types of local, regional, national and professional events, Virginia Beach can create addition opportunities for attracting teams, their support staffs and spectators to the area and take the pressure off of other venues such as the Convention Center and Field House so those venues can concentrate on events more suited to their capabilities.

“It’s getting harder to compete with other cities for sports tourism without having the type of facility we need to host major sporting competitions and tournaments,” says Van Dommelen. “A lot of major tournaments are looking for the types of facilities that are specifically built and designed for their purposes and needs. So, we commissioned a study to look at our market as a sports tourism destination and what it will take to advance our effectiveness in that market.”

One of the recommendations was that the facility should feature hard courts for basketball and volleyball tournaments. That space can also be used for wrestling tournaments, gymnastics events, martial arts competitions and other such events. But in reviewing existing facilities across the U.S. and what it would take to make the Virginia Beach Sports Center hugely competitive and unique, it was determined that a 200-meter indoor track with hydraulically banked corners that can be used for higher-level indoor track meets will really set the bar high for Virginia Beach as a destination. Once a track event is over, the banked corners of the track can recess back into the floor to prepare for the next event, whatever that might be. 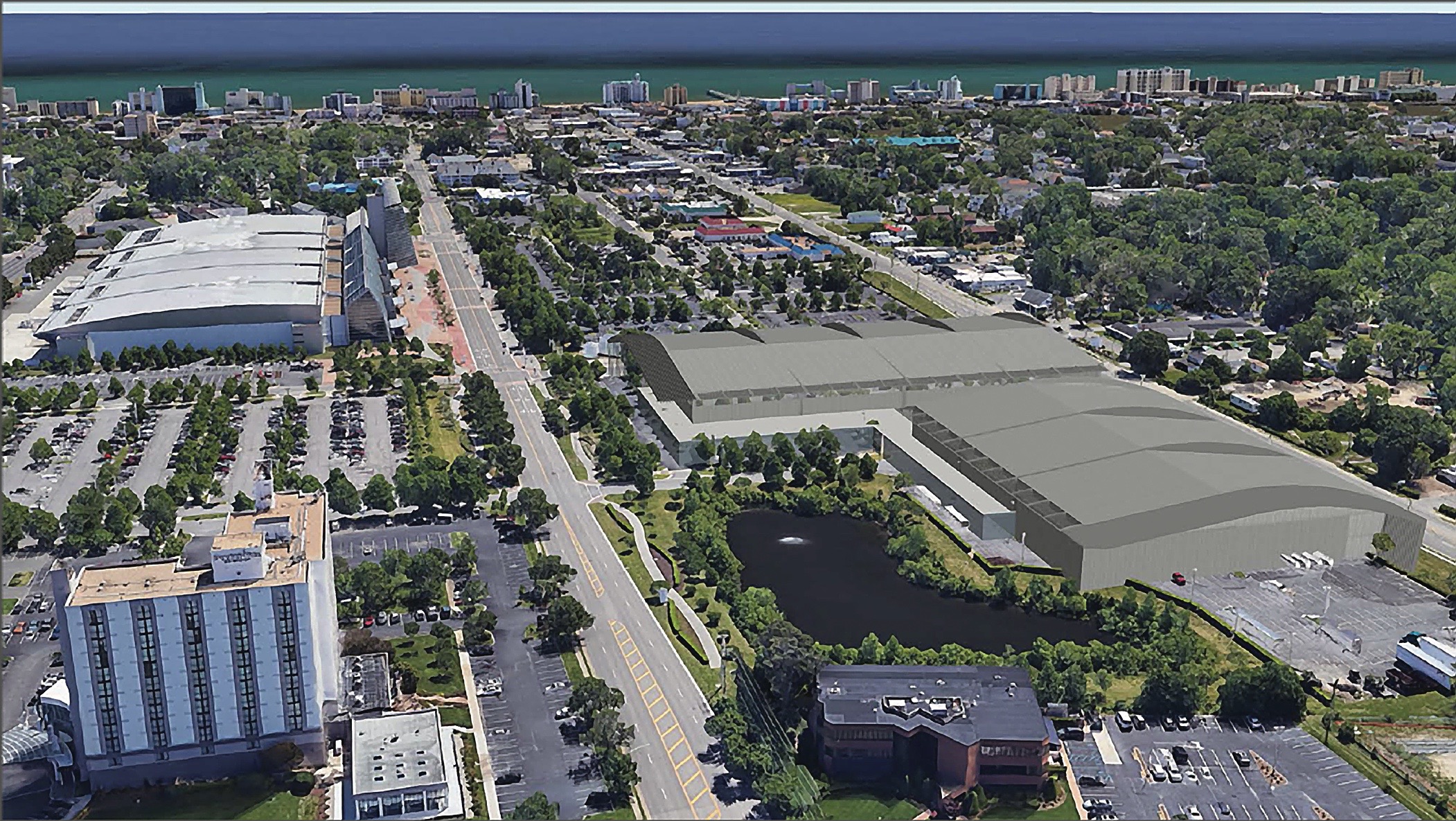 Conceptual rendering of the sports center.

Of course, major projects like these don’t happen overnight. Action plans need to be created, public opinion meetings held, proposals sent out and bids reviewed. “The three major projects—the sports center, Dome site and pier development—are running parallel paths of procurement,” says Virginia Beach Deputy City Manager Ron Williams. “In regard to the sports center specifically, we are in an interim agreement right now for the preliminary design. That should then produce a guaranteed maximum price with our designer/builder, to get to a comprehensive agreement for the construction by July. We expect that facility will open in the first quarter of 2020. As for the Dome site, we are in an exclusive negotiating period with the development partner, Venture Realty, and the goal is to negotiate a term sheet by early this summer, with the idea that a development agreement would hopefully be adopted by the end of the calendar year. The goal of that opening would be mid-2020. For the pier, we are currently advertising to solicit bids for leasing to develop at the new pier, providing an opportunity to leverage private sector investment around a new pier development. Those are due mid-May, and we would expect we’ll award one or more opportunities for pier development in the future. Anybody that has the ability to develop a new pier and leverage a redevelopment around that, anywhere between 5th and 40th streets, we’ll entertain the consideration for that. Our existing pier is privately owned, is 68 years old and is vulnerable to storms. We have set aside the funding for a new pier that’s open to the public, but we believe that the best strategy is one where we can leverage additional private sector investment over and above that.”

Here We Are Now; Entertain Us

Built in 1957, the Alan B. Shepard Convention Center, also known as The Dome, was an entertainment venue that was home to hundreds of concerts before being demolished in 1994. Since then, the area has been used as a parking lot, creating both an eyesore for the city and untapped potential for attracting new visitors to the area. “Our team is extremely excited about the Dome site project,” says Donna MacMillan-Whitaker, managing partner for Venture Realty Group. “Our focus is to create a place that can be used and enjoyed by locals, as well as the 22 million folks who live within a five-hour drive of our resort shoreline. We are currently working through due diligence and feasibility studies with the assistance of the City, and we will provide more details about the development and our prospects as we move forward.”

As for where the money is going to come from as far as the City is concerned, funding for these projects will not be a burden on local taxpayers because the money will come from a special reserve called the Tourism Investment Program (TIP) Fund (see below for details). “The Tourism Investment Program Fund has a capacity to support all these projects and has previously been used for our Convention Center, for the Sandler Center, for parking at the Aquarium, Atlantic Avenue trolley replacement, the Rudee walk development, boardwalk revitalization and in part to support the Hurricane Protection Project of the new boardwalk,” says Ron Williams. “It’s been some time since we had a major new investment, so a capacity has built up in the fund. In the coming years, that capacity will be used to support these major elements of the Entertainment District.”

Additional private-sector funding is being provided by a consortium of prominent Virginia Beach investors and property owners including the Bonney (one of the three original pier owners in addition to the Lachman and Murden families), Capps (owners of the Breakers Hotel), Lachman, Murden, Sibony (property owners, owners of Coastal Edge Surf Shops, Sunsations stores and the Hampton Inn on 11st Street) and Thompson (owner of Gold Key | PHR) families.

One project that is ready to begin this year is a major upgrade to 19th Street. Construction is expected to begin in May to completely redo the streetscape, storm water drainage and utilities in the area. It will also provide additional on-street parking as well as expansive, 8-foot wide sidewalks that are meant to support the ViBe District. According to Ron Williams, the fact that there is a nice street grid already in place where construction will be happening will absorb any incremental impacts that may occur during the renovation.

The Tourism Investment Program (TIP) Fund was created on July 1, 2011 by combining two funds that already existed at the time:

By combining the two funds, tourism in Virginia Beach is now the only local industry that taxes itself to put money into the General Fund and to keep money set aside to reinvest in the industry. The result is a reserve that builds over time to fund new projects that can contribute to initiatives designed to increased Virginia Beach’s appeal to visitors.

“The TIP Fund includes a percentage of the cigarette tax, hotel taxes, meals tax and all of the amusement/entertainment tax,” says Ron Williams. “All of that money is earmarked and dedicated to go into the TIP Fund. It is a strategic fund that gives Virginia Beach the ability to continue to refresh our tourism efforts with new products in tourism investment and sustain some of the ongoing items we need, such as resort maintenance and management and activities that happen on an annual basis, such as programming and entertainment. Since our general fund goes toward capital improvement programs like schools, roads and storm water, the two funds don’t ever have to compete. The majority of the dedicated revenues go to the general fund, while the smaller portions that go to the TIP Fund give us the ability to be strategic when those opportunities arise.”

The timing is right now for the regeneration of the Entertainment District that will turn vacant parking lots and aging properties into a booming tourism oasis. The TIP Fund money is making it possible to get the ball rolling, with additional funding being provided by private sector investors. But the best part is that the TIP Fund investment is self-sustaining: New and unique amenities will attract additional tourism dollars to the area, which puts more money back into the Fund. According to the Virginia Beach City Manager’s office, the updated Entertainment District will replenish the TIP Fund within eight years after the projects are completed and open to the public.