Trending Now
Protecting Patient Data
Market Report: Health Care
How to Find Pandemic Relief with the Help...
Millennial Personal Appearance and the Law
Hacking is Becoming Less Human, More Robotic
Impacting the Workplace Loneliness Epidemic
Ransomware: What It Is, How to Avoid It...
Using Technology to Increase Employment Opportunities for Veterans
How Technology Has Caused a Shift in Marketing...
Out-of-Network Follies with Health Insurance
Beyond The BizExcellence In Leadership

NASA Director Clayton Turner on the Future of Space

To Mars and Beyond: Newly Appointed NASA Langley Director believes anything is possible 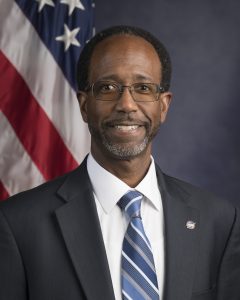 After Clayton Turner graduated from Rochester Institute of Technology in Rochester, New York, with a degree in electrical engineering, he was quickly swooped up by NASA Langley Research Center in Hampton in 1990. Over the years he has held a number of positions there, including design engineer, chief engineer, director of Langley’s Engineering Directorate, associate director, and deputy director, before being tapped to take over as director, assuming his new duties on September 30, 2019. Here’s what he had to say about his journey—and the journeys that are yet to come.

What got you interested in working with NASA in the first place?
When I graduated and I was looking for positions. I had interviews at a number of government entities and a couple of private ones. The government entities required a pretty extensive background and security check. And while I was going through the process, I got a call from NASA Langley to come down for an interview. NASA had not been on my radar because [in a hushed voice] “it’s NASA.” But I got a call on July 11 from NASA Langley Research Center. The reason that day stands out is because that’s my birthday. Not only that, but the person calling me was literally calling from a place that was within site of where I was born—Langley Air Force Base.

How was the interview?
We did the traditional interview then they took me on a tour. We went to our environmental test chamber, and at that time there was an instrument in the chamber. Basically, what they were doing is ramping it up to extreme temperatures–really hot, really cold—within the operational range of that instrument. Then they watched strip chart recorders that provide data. This kind of experimentation generally lasts for about 10 days, 24/7. What struck me was that the people running that test—again remember, 24/7, just looking at strip chart recorders—the energy and excitement because their baby was about to fly. And I was hooked from that point forward. All the other interviews, all the other opportunities, drifted into the background. This is where I wanted to be.

What will you be doing in your new role as director?
The largest part of my new role is enabling an environment where the brilliant people that come through the gate every day can do amazing things. Sometimes that means setting a vision, setting a path and removing some obstacles. We work through our various missions and they take a long period of time. There are a lot of turns, and peaks and valleys, and you have to navigate to be able to enable those long-term missions. Part of my job is making sure I’m communicating and sharing with our stakeholders the value of what we do here at Langley as part of the bigger NASA for the nation. Another part of my job is helping our teams see the changing world and the environment where we, NASA, are not the only game in town for a lot of the things we used to do when we were the only game in town. And how we progress and still add value to the nation by partnering with private industry, partnering with academia, and even more aggressive ways, partnering with internationals, to do things like ARTEMIS (see sidebar), where we’re going to land the first woman and the next man on the moon in 2024. Even more important than just landing on the moon, by 2028 demonstrate sustainability there. We here at Langley, and NASA in general, will also play a key role in how we are going to get humans on Mars. All of those things reflect back to what we do here on Earth. All the technology development, all the inspiration, all of those things come back to make it better for humankind.

What advice do you have for younger people coming up in a similar path?
I have the opportunity to go out and speak to a lot of groups, and especially when I’m speaking to the youth, I encourage them to find their passion. That may be the things we’re doing here at Langley, but to me that’s table stakes. You have to find your passion. And I caution them not to think there is some time scale during which they need to find that passion. But they should be aggressively looking for that passion. And it may change over time, but they want to find it. Once they find that passion, I encourage them to embrace it, to find out everything they can do. It doesn’t matter if they are the three- or four-year old in pre-K, elementary school, middle school, high school or college. There are things you can do to investigate what you feel excited about. Go and see what a person doing that thing does day to day. Find a place to volunteer. Find a place to go and work and observe.

Anything else?
Whatever you can share about the excitement with the ARTEMIS program (see sidebar). Artemis (Greek goddess of hunting) was the sister to Apollo and that’s our banner. Just like when I was a youngster, the Apollo generation was excited by all that we were doing to do with landing on the moon. Now the Artemis generation, that three- and four-year old, that middle schooler, that high schooler, it’s our job to excite and inspire them to do even more amazing things. I happened to be in at NASA headquarters in D.C. some months back, and I walked out on the mall because they had a projection of the Saturn V rocket on the Washington Monument. It was an amazing site because the resolution. But as I was walking back down the mall, it struck me…there were probably a few thousand people outside, at 9:30, 10:00 at night, on a hot summer night in D.C., to see an event that happened 50 years ago. I was just overwhelmed with how amazing it is to be part of NASA. We made the impossible possible. Now, project forward to the next 50 years and just let your mind wander to what might be possible. We’re part of an organization that does that. And that’s just is amazing to me.

Next Up at NASA

Here are some of the projects that NASA Langley will continue to work on under Turner’s leadership.

Athena is a quick-turnaround, small-satellite project. The project’s goal is to demonstrate how new spacecraft technology can provide a smaller, cheaper platform to enable future missions measuring solar energy reflected and absorbed by the Earth. Athena is on track to go from conception to payload in less than a year. A more traditional, full-scale mission might take five years. This faster, cheaper, more agile mode of working holds great promise. Small satellites—defined by NASA as spacecraft weighing 180 kilograms (397 pounds) or less—can help the agency advance science and human exploration by providing new options for cutting costs of space missions and expanding access to space.

In early 2017, the United States Naval Air Systems Command (NAVAIR) requested the NASA Engineering and Safety Center (NESC) provide an independent review of their efforts to address the increased occurrence of physiological episodes across their F/A-18 fleet. Since NASA has F-18s and F-15s, obtaining some of this information would assist in understanding pilot physiology in high performance aircraft. The intent of this assessment, begun in 2018, is to collect NASA pilot respiratory rates, tidal volumes and air composition during a number of flights. The information NASA shares with their Department of Defense partners is of vital importance to reducing military aviation mishaps and saving taxpayer dollars.

As part of Langley’s efforts to meet the demands of the future, they are transforming their center. Part of this effort includes new, energy-efficient, state-of-the-art structures. The Measurement Systems Laboratory will open in 2020 and will feature 40 clean rooms and labs. Langley also looks forward to breaking ground on a highly dynamic new wind tunnel, the Flight Dynamics Research Facility. This versatile and cost-effective wind tunnel will replace the nearly 80-year-old, 20-foot vertical spin tunnel. These projects not only advance the center’s projects and missions, the construction efforts will employ many around the region.

Navigation Doppler Lidar (NDL) is one of Langley’s many contributions to the Artemis Program. NDL is a multipurpose instrument capable of high-precision measurements necessary to calculate the entry and descent of a lander to a celestial body such as the Moon or Mars. NDL builds upon the Cloud-Aerosol Lidar and Infrared Pathfinder Satellite Observations (CALIPSO) technology, which used Lidar from space to observe clouds and aerosols for climate and weather science. Langley is also involved in sustainment efforts, such as in-space assembly, to build the structures necessary to live and work in space.

Langley engineers and researchers seek to modernize the skies with important work in autonomous aircraft, focusing on urban air mobility. The Langley Aerodrome-8 (LA-8) is the center’s newest unmanned aerial system to study urban flight. The LA-8 is undergoing wind tunnel testing and is due to begin flight testing in late August 2020. Langley’s focus is on UAS safety, ensuring autonomous vehicles are able to detect infrastructure and other vehicles in the area to avoid collision, or land if there is no safe path for flight.

Langley has long been at the forefront of Earth science missions. The Stratospheric Aerosol and Gas Experiment III (SAGE III), a Langley-led mission, is installed on the International Space Station. Since March 2017, the instrument has been measuring and collecting data on Earth’s sunscreen, stratospheric ozone, as well as other gases and aerosols, which are tiny particles in the atmosphere. The next step in monitoring ozone levels in the atmosphere could be the SAGE IV Pathfinder. SAGE IV will maintain the critical measurements in an innovative and sustainable way that drastically reduces size and cost. Langley also completed work on the Tropospheric Emissions: Monitoring of Pollution, or TEMPO, which will be the first space-based instrument to monitor major air pollutants across the North American continent hourly during daytime.

5 Tips for Earning Your Online MBA