Trending Now
Protecting Patient Data
Market Report: Health Care
How to Find Pandemic Relief with the Help...
Millennial Personal Appearance and the Law
Hacking is Becoming Less Human, More Robotic
Impacting the Workplace Loneliness Epidemic
Ransomware: What It Is, How to Avoid It...
Using Technology to Increase Employment Opportunities for Veterans
How Technology Has Caused a Shift in Marketing...
Out-of-Network Follies with Health Insurance
Uncategorized

The Virginia State University Trojans football team once put a loss squarely on the stomach of Duane Thompson.

“As a freshman, we had these meetings and all we ate was salsa,” recalls Thompson, now 44. “You ate it for breakfast, lunch and dinner. I had an aversion for preservatives in the salsa we were eating. I got heartburn and acid reflux. I changed salsas, and we lost a game because I broke with tradition.”

His grandmother, who had a large garden, would drive to Petersburg from Newport News to bring Thompson fresh produce. That’s when he started experimenting with fresh ingredients and developed what he and his college friends called “The Dip.”

“I had some bell peppers and fresh herbs—cilantro, garlic and parsley—and realized I didn’t get any ill effects,” Thompson remembers. “There was no more acid reflux.” That sensitive stomach and subsequent concoction led to Thompson perfecting a salsa recipe that eventually ushered in Sabrosa Foods—which still utilizes fresh, locally-sourced ingredients.

“We grow all of our own bell peppers, cilantro, jalapeño and parsley,” Thompson explains. “Farmers come in, drop it off and we process it.”

At its inception, Sabrosa manufactured and distributed roasted bell pepper salsa. Now the company has expanded to providing food service for government contracts, like NATO, Langley Air Force Base, Fort Eustis and the Pentagon.

“When we got our first contract with military defense commissaries, we had a 3,000-mile radius on the East Coast from Fort Knox to the west to Fort Drum up north and Fort Bragg to the south,” Thompson says.

Earning the initial business was exciting for a young startup, but then the reality of how to fulfill the orders set in. It cost Sabrosa $20,000 to supply its products to each of the military installations. Since acquiring a bank loan wasn’t an option, Thompson borrowed money from his parents, depleted his savings, sold possessions and negotiated a slow rollout. Then he set out making the deliveries.

“I borrowed my mother’s SUV and drove [the orders] to all of the bases. It took me 7 straight days,” he laughs.

Locally, Sabrosa has been shelved in 38 stores, including every Farm Fresh and the Virginia Store, and they distribute to Virginia Tech and the College of William & Mary.

Aside from challenges common to startup, Thompson says as a minority business owner, his first noticeable obstacle was legitimacy. “Being black, we have to show that we can compete in the same arena,” he says. “Early on when we got the commissary contracts, when I went to the back of the stores, they didn’t believe I had a real contract. They were used to dealing with big trucks and working with bigger companies who could afford distribution.”

He also cites access to capital being another difficulty for minorities startups. “I had a shoestring budget. For years, I was literally selling salsa out of the back of my trunk,” he says.

Despite the difficulties, Sabrosa has pressed on. Thompson has partnered with the Virginia Peninsula Foodbank and Norfolk Vocational Academy, sits on the Agricultural Board at Virginia State University, has keynoted the Small Farmers Conference, and he gives money to Norfolk Scholarship Foundation. “And that’s not even half,” he smiles. “You have to give a hand up.”

His latest venture has been co-authoring a book with Cheryl Ross called Thinking Outside the Bottle. “It’s geared toward people who have a product,” he explains. “It has places to write, and when you’re done with the book, you’ll have a plan written.” He encourages those serious about entrepreneurship to take the leap without a safety net. “I’ve mentored 30 people. The ones who quit always have something to fall back on. In every business that has succeeded, the entrepreneur put themselves in a place where they had no choice but to succeed.”

And that’s much like what Thompson did with Sabrosa—from a gritty, low-budget startup to a multi-million-dollar-a-year business. “This company started from nothing,” Thompson acknowledges. “We’ve run the company very efficiently, and we’re still growing.” 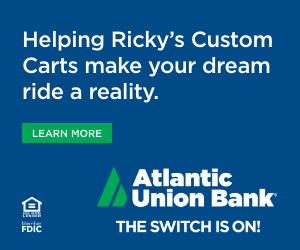