Hotels on the Beach: Hanging Tough

Optimism and communication are the keys for hotel success, says Teri Wiley, the new executive director of the Virginia Beach Hotel Association.

In May 2021, the hotel industry in Virginia Beach had about 1,100 jobs open, leaving the businesses staffed at only 60%. This deficit sparked a “Fund your Fire” program, which gave a $1,000 bonus to the first 250 people hired in hospitality positions.

Is this problem a distant memory?

“The employment challenge will continue,” says Teri Wiley, Executive Director of the Virginia Beach Hotel Association. “We will need to work together to find ways to combat the future of this nationwide issue. This area will be a priority as I get oriented in the coming weeks.”

When she spoke with CoVa BIZ, Wiley had just been hired. She has 30 years of experience in tourism, with the last seven years working as a senior meeting innovator for the Balcom Group, a women-owned and -operated conference planning and management company.

Virginia Beach has been a strong tourist destination, even during the pandemic. In 2019, 19 million people visited the city, a new record. In the summer of 2021, the city’s hotel occupancy rate averaged 84.2%. This percentage was slightly higher than the summer of 2019.

Wiley notes several factors in Virginia Beach’s tourism success—in the summer and throughout the year. The city is extremely accessible to all travelers, with its location on the mid-Atlantic shore being within a day’s drive of two-thirds of the nation’s population. The area has also emerged as a year-round destination with activities during the spring, fall and winter, including festivals, inside museums, shopping and dining at Town Center and the growing ViBe district, and new breweries.

“We’re fortunate to have beautiful outdoor offerings,” Wiley explains, “with miles of beaches, hiking trails, fishing, dolphin watching, boating, farmers markets and outside, family-friendly entertainment. So, if outdoor activities are still recommended, Virginia has all that to offer and more.”

Another reason that Virginia Beach hotels are seeing strong numbers compared to other parts of the country could be due to their dedication to cleanliness and safety. Wiley promises that the hotel industry will carry on communicating to visitors that all local, state and CDC guidelines are being followed to keep all guests safe.

“Virginia Beach has worked tirelessly to develop protocols for safety, security and the well-being of our community and guests,” she says, “and will continue these steps moving forward.”

The only remaining concern: Virginia Beach hotels need to be ready and creative in fixing the staffing shortages. Projections point toward a full tourism recovery from the hit of the pandemic in 2023, giving the hotels time for innovative solutions.

Making It Official at VB CVB 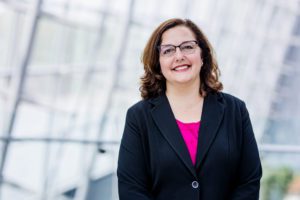 Helman, after serving as interim director for a year, is now director. She’s the first woman to hold the position. She’s been a loyal teammate, making winning plays for years: In 1999, she helped launch CVB’s sports marketing program. Later, she served as its director. In October 2020, Helman saw her hard work as a mastermind behind the new Virginia Beach Sports Center rewarded when it opened. Two weeks later, the NCCA chose the center to host four men’s and women’s indoor track and field championships, including a division I event. Not only can local fans watch some of the world’s fastest athletes each year from 2023 to 2026, 10,000 championship attendees will spend money in the resort area in the off season.

Joining Helman in a permanent role is Lauren Townsend, who also served as an “interim” first. Townsend is vice president for marketing and communications, after earlier contributing to CVB’s marketing efforts as director, Norfolk’s as well as marketing manager for VisitNorfolk and Virginia’s tourism promotion through BCF advertising agency.

Could Interest in “Virginia Is for Space Lovers” Skyrocket?

The “Virginia Is for Space Lovers” campaign reminds tourists that the state is more than beaches and mountains.

Most of us have heard the slogan “Virginia Is for Lovers,” but some might not have heard “Virginia Is for Space Lovers.” In 2019, the Virginia Tourism Corporation (VTC) added the slogan to its publicity efforts, partially in celebration of the 50th anniversary of the Apollo 11 mission—and also due to Virginia’s vast space-related attractions.

“We chose ‘space lovers,’” Andrew Cothern, communication manager for VTC, explains, “because when we see similar attractions across Virginia, we like to group them together.” These “groupings” highlight just how many activities exist for tourists with a specific interest.

The two NASA facilities are also contributing to the upcoming Artemis missions, which will eventually land the first woman and the first person of color on the moon. An un-crewed Artemis mission around the moon, with the first flight of NASA’s space launch system rocket, is scheduled for March or April of 2022

As interest in Artemis grows nationwide over the next three years, the projected timeline for the final mission, so too might interest in our nearby space offerings and all the “Virginia is for Space Lovers” attractions.

Making History with Sports in Williamsburg?

For decades filled with history lovers, Colonial Williamsburg Regional Visitors Center may one day soon welcome those more interested in making history themselves as sports stars.

Once lines formed for tickets to Colonial Williamsburg at their visitor center, and dollars poured it. Now its site is proposed for the city’s new 150,000-square-foot regional sports complex, and projections point to a non-profitable, plus-sized playground.

The Historic Triangle Sports Center Planning Committee sees the location, 101 Visitor Center Drive, as perfect for budding basketball and volleyball stars, their parents and their other loyal fans. Locals could use the sports complex daily and travelling sports teams regularly for tournaments. It would be near the interstate, making it easy to reach, and a free-throw away from hotels, restaurants and shops.

With online information and online tickets, not many tourists need a visitors’ center, so why not morph the 100 acres into something magnificent that could attract money-spending sports enthusiasts year-round? Currently Williamsburg only markets to outdoor sports tournament organizers. Pre-pandemic, sports tourism generated $45.1 billion nationwide annually, according to the Sports and Tourism Association. Plus: Over 283,000 people live within a 30-minute drive of the proposed site and 1.5 million within a 60-minute drive, say planning committee members.

Williamsburg leaders have been considering the project for more than eight years and are luring James City County and York County to play, too. What’s preventing a slam dunk? While generating money for business owners, the sports complex itself could lose money, with press reports predicting annual losses from about $400,000 to $1 million.

In the News: DroneUp, Index AR Solutions Joins CEWD and Ghent’s ‘The Rosalie’