Trending Now
From Livable to Luxurious
Protecting Patient Data
Market Report: Health Care
How to Find Pandemic Relief with the Help...
Millennial Personal Appearance and the Law
Hacking is Becoming Less Human, More Robotic
Impacting the Workplace Loneliness Epidemic
Ransomware: What It Is, How to Avoid It...
Using Technology to Increase Employment Opportunities for Veterans
How Technology Has Caused a Shift in Marketing...
Biz ReportBy the NumbersNetworking News

As ordinary consumers have become more familiar with the meaning of “supply chain,” we check in with some local industry experts

One of the silver linings of the last two years: People are now talking about what a supply chain is, says Brett Vassey, president and CEO of Virginia Manufacturers Association.

“And they’re talking about how important it is to make things in America again,” he adds, “so we’re not dependent on foreign countries.”

Vassey sees the mind shift as a huge leap forward in the American consciousness. We are finally thinking about how things are made and where—and why it matters. Vassey predicts that in the next 10 years, 25,000 to 50,000 jobs can be “re-shored” thanks in part to this new thinking.

“If we do it right,” he says, “in our Commonwealth alone we can do that and in a number of product categories.”

Struggles remain, though. Building supplies, semiconductors and aluminum are scarce, for example.

All are of concern—especially so, aluminum. Not enough mining and not enough processing, in part because of a lack of workers, are a problem. The limitation of raw aluminum creates a limitation of products that are dependent on it.

“A perfect example is aluminum cans,” Vassey notes. “There is a chronic supply chain problem with aluminum cans in the United States right now.”

Watch out soda and craft beer companies and consumers. Beverage businesses face increasing prices, paying what Vassey says is the “spot price,” the higher-than-usual price today to have aluminum cans now. They are left with a choice: Pass along the increase to the consumer—or find a different product.

“We try to help our companies find alternative packaging for the short term,” Vassey says. “It could be sealable plastic bottles.”

Adding to shortages: A lack of energy. “If we don’t get our hands around the electricity and natural gas constraints as well,” Vassey cautions, “it’ll keep feeding the cycle of inflation.”

He knows what many don’t: About 30 days a year, Virginia manufacturers are focused on natural gas – or the lack thereof.

“We’re experiencing some pretty significant limitations,” Vassey says. Residential consumers are first in line for natural gas. If there’s a weather event or another increase in demand, manufacturers are sometimes stuck.

“We get ‘curtailed,’” Vassey explains, “meaning the supply stops or lessens, and our production goes down.” He wants constraints on pipelines lifted, and infrastructure to improve – so more gas is available, and it is delivered more quickly. Then, manufacturers aren’t “curtailed” and can keep working.

More troubles: Natural gas can be used to make lightweight plastic products that go into everything from ventilators to vehicles. A byproduct is ammonia, which is used to make a specialty fertilizer.

“All of the companies that depend on those products get delayed when we get curtailed,” Vassey says.

Yet optimism keeps Vassey, who celebrates 20 years on the job this July, going. He’s been through tough times before—2008 to 2010 during the “global economic freefall” in his words, and 2000 to 2002 with the aftermath of the North American Free Trade Agreement hitting Virginia, when Vassey reports the state losing “entire industries” such as apparel, textiles and furniture.

“I fundamentally believe in innovation,” he says, “and the power of making things in America for the very first time in a long time. It was easy to be a disposable economy before, when you didn’t care where something was made. It was cheap, and you could buy another one if you had to throw it away. All of that has changed.” 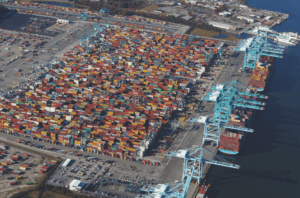 CONTAINERS AND CAPACITY: Compared to five years ago, Virginia International Gateway terminal has doubled in size.

Talk about good timing. For several years, the Virginia Port Authority had been working to gain the confidence of the Virginia General Assembly and our last few governors. The goal: Secure funding to increase capacity and improve technology. The money came, and the first round of work is done—making Coastal Virginia’s port even more desirable.

Back in 2016, and especially 2017, the ports were hitting capacity, Vick explains. The Authority wanted to attract new port users—whether retail distributors, e-commerce distribution centers or manufacturers—to grow volumes and grow Virginia. They had to have more capacity to be able to handle more containers.

With state funds, the Authority added capacity for a million containers. They put in semi-automated stacking cranes and a truck reservation system. They allow for round-the-clock work. When trucks arrive for containers, the containers are ready in the right spot. No waiting.

“If you look at the supply chain right now, with surges that have been happening,” Vick says, “we’ve been able to absorb more than other terminals and stay fluid. In a lot of places, they are so congested that they just can’t move containers. We’re not experiencing that because we implemented new technologies that allow us to optimize the efficiencies of how we move the cargo.”

The Authority thought it would take three to five years to reach its new capacity limits given their improvements. It’s taken only a year and a half. They’ve sped the timeline for north NIT enhancements.

17% – The next highest year over year volume growth at an East Coast port, Charleston 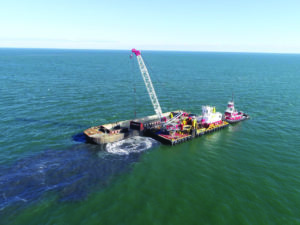 Lots of activity is going on at Virginia Port Authority terminals (see related Market Report article), but it’s not enough.

“We’re currently dredging the harbor so it will be the deepest, widest aggregate navigation channel on the East Coast,” Cathie Vick, chief development and government affairs officer at Virginia Port Authority, reports.

Funded with state money and additional money from the federal Infrastructure Investment and Jobs Act, the last phases of the dredging will get underway soon. The project is about much more than bragging rights:

In 2014, the average size vessel was 6,000 to 8,000 TEUs (20-foot equivalent unit, a measure of volume in units of 20-foot-long containers.) Now the average size vessel calling the Authority for access is 14,000 to 16,000 TEUs. The harbor needs to be able to accommodate the bigger vessels. The Authority wants “first in calls,” meaning a vessel from Europe or China or elsewhere considers Coastal Virginia before another port.

“It gives us the competitive advantage,” Vick says, “to attract businesses [to the state] who have imports because they’ll be close as they come in.”

They don’t have to wait for a ship to go to New York or Savannah first, and then wait again for the imports to make their way to Coastal Virginia.

So far in 2022, the Authority has stolen away five “first ins” from other ports.

“The bottom line, this is good for jobs,” Vick says, “because you have more demand for people to help take off the products, and then it’s good for the economy because we have the products here locally.” 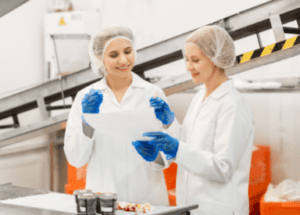 People are applying for jobs again, says Virginia Manufacturers Association President and CEO Brett Vassey. The first quarter of 2022 looked promising. There’s lots of room for improvement, though—especially with getting women to come back.

“We’ve lost a lot of them from the workforce,” he says, “and that’s a big issue for us. We’re trying to figure out ways to create attractive work schedules and incentive packages to attract more women to return to the manufacturing sector.”

Vassey is seeing his members offer workforce training and professional development, helping women grow their skills and careers. Several have introduced female employees to Women in Manufacturing, an affiliate organization.

“They’re dedicated to career coaching, professional development and reward and recognition,” Vassey notes, “with mentoring with senior female executives for young talent to help them through growth within manufacturing.”

The Ports in Print 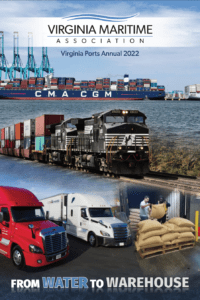 Since 1925, the Virginia Maritime Association, which represents a statewide collection of more than 450 member companies in the region’s maritime supply chains, has produced the Virginia Ports Annual, a resource guide for Virginia’s port-related industries designed to encourage and promote international commerce through Virginia’s Ports.

The cover headline of the 2022 edition of the Virginia Ports Annual, “From Water to Warehouse,” suggests the full circle of complexities intrinsic to the supply chain, which have become top-of-mind, not only for the Port’s users, but for consumers in recent months.

While the print edition is strategically distributed to membership, economic development groups and partners, the digital version can be viewed on the Virginia Maritime’s Association’s website: VAMaritime.com.

From Livable to Luxurious