Trending Now
Protecting Patient Data
Market Report: Health Care
How to Find Pandemic Relief with the Help...
Millennial Personal Appearance and the Law
Hacking is Becoming Less Human, More Robotic
Impacting the Workplace Loneliness Epidemic
Ransomware: What It Is, How to Avoid It...
Using Technology to Increase Employment Opportunities for Veterans
How Technology Has Caused a Shift in Marketing...
Out-of-Network Follies with Health Insurance
Biz ReportBy the Numbers

How Veterans Can Diversify Virginia’s Industries 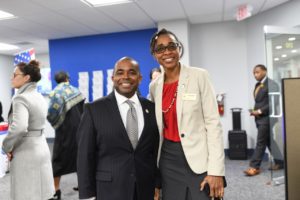 Quickly correcting himself to the schmoozing catchphrase, “shaking hands and kissing babies,” Camp explains he bonds with community leaders and guides job-seeking veterans, veterans-to-be and military spouses to them. Before connecting, the jobseeker turns to Camp and his staff, backed by Hampton Roads Workforce Council, for coaching.

The cultivation worked for Navy veteran April Valdepeña, who visited the Norfolk Hampton Roads Veteran Employment Center two years ago. The staff enrolled her in resume building and interview workshops. After improving her skills, Valdepeña applied for jobs and interviewed with AppleOne. They hired her as a staffing consultant.

“I went into the interview with so much confidence that the employer was as excited as I was,” Valdepeña says. “The Center helped me see my potential and gave me courage.”

“We become the de facto, ‘hey, go here,’ when they recruit veterans,” Camp predicts of the Center.

Organizations connect with Camp and learn about becoming “V3ed,” Virginia Values Veterans certified by the Virginia Department of Veteran Services. “V3ed” companies earn invitations to employee-recruiting networking events and referrals, and some qualify for $10,000 grants.

They’re part of Camp’s perfect-world plan that starts more than 12 months before an enlisted-veteran transitions. At that time, Camp would meet the veteran-to-be and share how his or her skills apply to industries.

“Say the person is an electronic technician and has no desire to continue working on a submarine,” Camp says, “and may not have realized that his skills directly translate to biotechnology.”

A seed is planted. Then around nine months out, Camp’s staff introduces LinkedIn networking, free training available through the Department of Defense SkillBridge program and other funded trainings. At the six-month point, the military member starts training. With three months left, he or she attends informational panels and mock interviews hosted by “V3ed” companies and others. Ideally, it’s also when job offers roll in.

Years ago, Camp, a 20-year veteran, wrote an article about why veterans don’t get hired. His set realistic expectations and filled knowledge gaps. Now, through his one year-plus guided transition plan, he’s morphed written words into detailed, personalized action.

“When we’re getting out of the military,” he says, “we simply don’t know what we don’t know.” 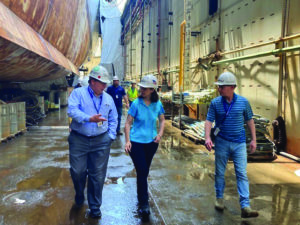 The catchy slogan “divest to invest” given to this year’s original proposed defense budget wasn’t clever enough to earn Congresswoman Elaine Luria’s support. As a slogan and a strategy (which included decommissioning seven Navy cruisers), it left her “very unhappy,” she says.

“We can’t afford, with the current threats that we face today with China, to just make the Navy smaller and hope that we’ll [instead] come up with some new technology that we can employ 10 or 20 years from now,” Luria explains. “Every leader in the military says China is our number one priority. The budget didn’t reflect that.”

Luria, a Democrat from Coastal Virginia, teamed with Mike Rogers, a Republican from Alabama, to add $25 billion to the defense budget, retaining three of the seven cruisers proposed for decommissioning and requesting three new destroyers. The original budget funded one.

“We’ve been building two a year for as long as anyone can remember,” Luria notes.

Luria earned support from all House Republicans and 14 Democrats. As CoVa BIZ went to press, the Senate had added 791 amendments and approximately another $25 billion to the budget as they considered a vote.

Simulating the Trades to Grow the Defense Workforce 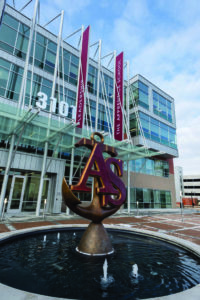 The Apprentice School is introducing its Innovation Room, with hands-on, simulated learning, to attract more workers in a variety of defense industry trades

Every student wanted to be a welder. It was the only trade they’d heard of.

Latitia McCane, director of education at The Apprentice School, saw that challenge unfold three years ago. Pre-apprentice students from New Horizons, a Peninsula education center, had been asked to pick one of 19 trades they’d like to pursue once they successfully completed a pre-program (offered two hours a week, after school) and applied to The Apprentice School.

It was McCane’s first year at The Apprentice School, founded in 1919 to train employees while they work at Newport News Shipbuilding. She took action. Positions beyond welders are often open.

“We needed some type of training equipment that the students could actually be trained on so they can get exposed to the different trades,” McCane says, “and then they could make an informed decision.”

The Innovation Room was born recently, filled with augmented and virtual reality training equipment simulating 26 trades supporting Newport News Shipbuilding. (Nineteen of the trades are immediate options for apprentices.) Staff roll out the equipment on wheels into the school’s gym, and students rotate from station to station.

“It’s very interactive,” McCane stresses. “The students have headsets on, and it is all equipment, and it gives you scenarios.”

She chuckles at the students’ reactions:

“What’s so ironic about it is that we schedule the time next to lunch,” McCane shares. “Thinking that OK, hour and a half doing this, you’ll be ready for lunch. They aren’t. They don’t even want to go to lunch.”

Build It, and the Funding Will Come?

When and by how much unmanned weapons will be fully funded by the United States government is yet to be determined (see related story about the 2022 defense budget in this section), but Huntington Ingalls Industries is moving ahead with its Unmanned Systems Center of Excellence in Hampton.

The first phase of the project, a 22,000 square-foot facility, opened in Dec. 2020. The second phase, a 135,000 square-foot building, slated for developing Boeing’s Orca Extra Large Unmanned (read: drone) Undersea Vehicle for the U.S. Navy, was scheduled to be completed by Dec. 2021.

530,000 nearby residents, 13,000 nearby businesses, 4 military installations
The numbers behind the decision to open a new Hampton Roads Veterans Employment Center in Newport News

10,000 people
The number of military members helped by the Norfolk Hampton Roads Veterans Employment Center in its first four years

$10,000
The amount that Virginia Values Veterans-certified businesses can qualify for in grants