Alison Reed has known she wanted to be an English professor since the fifth grade when she would watch her grandfather, Ian Watt, author of The Rise of the Novel and professor emeritus at Stanford University, reading and making notes on a legal pad. It was, perhaps, a romanticized notion of life in the ivory tower.

But Reed has found her life’s work with one foot in that so-called ivory tower and the other in the Norfolk City Jail through a program, Humanities Behind Bars that she co-founded with fellow community organizer Meghan McDowell, Ph.D. This multi-layered and continually evolving program is, essentially, a “grassroots collective of teachers, students, activists and artists committed to imagining a just world.”

Working with currently and formerly incarcerated people and their loved ones, the program facilitates inside-outside alliances through reading and writing groups, a film series, a pen pal program, a music program and more. Agency, self-empowerment, justice frameworks, social action, mutual respect and reciprocal learning are hallmarks.

Reed self-identifies as an abolitionist—someone concerned with “building something new … achieving safety and accountability without cages”—and a queer, white female. As such, the courses that she regularly teaches include African-American Literature, American Literature, Black Queer Feminism and Queer Theory. Though the term “queer” has often been used pejoratively, Reed favors the term because it describes an “orientation to power and to a politic.”

Reed’s concern with social justice began in high school in Utah where she found herself looking for language to explain the inequities she witnessed, including how resources were allocated to programs within her school where she was a member of the International Baccalaureate program. There she studied James Baldwin’s duet of essays, The Fire Next Time, and her own internal fire was fueled.

She went on to earn a Bachelor of Arts in English from Occidental College and both her Master of Arts and doctorate in English at the University of California, Santa Barbara, where she focused on performance cultures and social movements. Her particular passion became an abolitionist stance in the face of mass incarceration and the prison industrial complex, that is, the thorny nexus of government, industry, economics, societal ills and politics.

Reed has been on the faculty at Old Dominion University since July 2015. This, her first position since earning her doctorate, affords her the opportunity to affect change not just in the classroom but also behind the scenes. She serves on the Diversity Task Force, which works to make life more equitable in higher education through systemic change rather than “empty tokens.” She also serves on the Undergraduate Curriculum Committee where she fights for courses that respect the diversity of the student body. 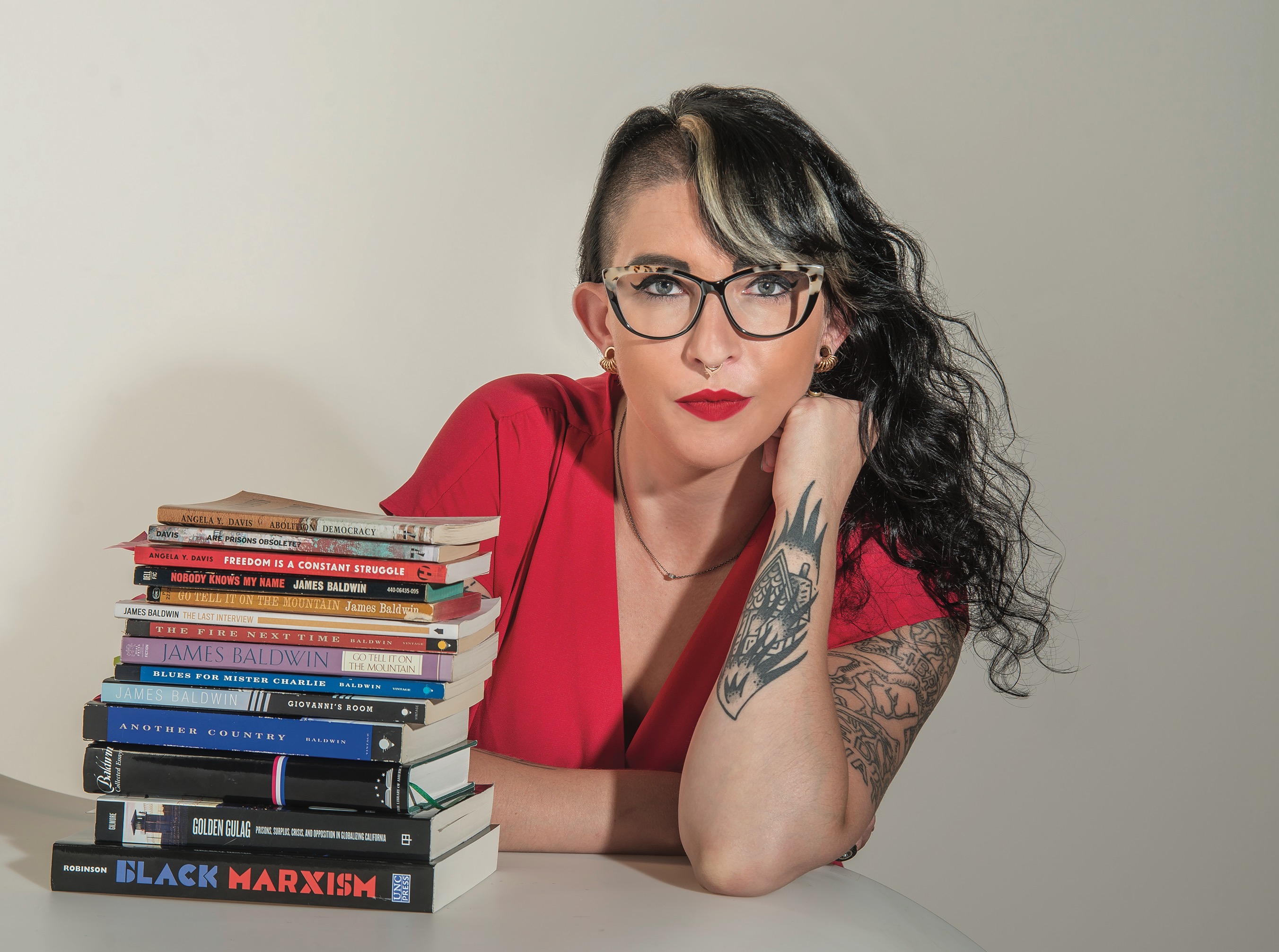 Her position also affords her the opportunity to engage in what she views as one of the most critical and pleasurable aspects of her job: advising and mentoring students. Reed is quick to impress upon these students that, “The struggle for justice is long and ongoing. It is a lifetime, not a hobby. Abolition is now … how do we replace control and coercion with care?”

Her greatest challenge is trying to balance the demands of the symbiotic relationship between her academic research and her community organizing work. She asserts that latter “informs and inspires” the former and is not really distinct. But, because there is so much urgency surrounding her community work, she sometimes feels guilty about taking the time to reflect and write. Still, she views her writing as “a kind of nourishment; it helps me be a better community organizer.”

Being a queer, white woman, Reed acknowledges, may cause eyebrows to be raised in relation to her motives. But she answers any skepticism with this: “Once you know what you know, you can’t unknow it.” She applauds skeptics for their stance, asserting that she is committed to her work and that the work must speak for itself, insisting that she is not involved in community action from a paternalistic standpoint of “helping.” Then she quotes Baldwin, “The paradox of education is precisely this—that as one begins to become conscious one begins to examine the society in which he is being educated.”