After four and half decades as president of Hampton University, William Harvey leaves behind an undeniable legacy at the private HBCU 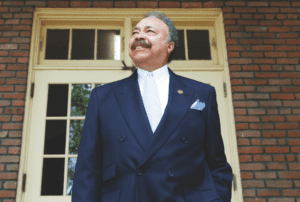 Hampton University’s William Harvey is one of the longest serving college presidents in the country.

One of the region’s most historic institutions of higher learning will soon be experiencing a historic transition. William Harvey has served as the president of Hampton University for 44 years, making him one of the longest serving college presidents in the country and the longest currently serving president of a historically black college or university (HBCU).

“It has been a marvelous journey,” Harvey says. “Over 38,000 students have graduated since I became president. They have gone out literally all over the world to be of service to others. Boy, that’s great.” While he plans to retire in June, slowing down isn’t exactly Harvey’s style. A prolific writer, he recently released a book, A Guide to Student Success in College. He has two more scheduled to be published this year and plans to use his retirement to pen a memoir. 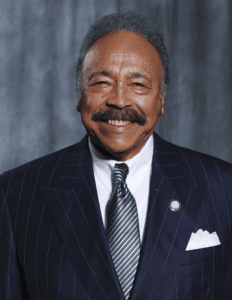 He will have no shortage of things to write about given a life and career with humble beginnings in Brewton, Alabama, and what he credits as a principled upbringing that led him on a successful academic journey—including a doctoral degree from Harvard, a litany of awards and recognitions, and more than four decades of transformational accomplishments at the helm of Hampton University.

Under Harvey’s leadership, Hampton University—known as Hampton Institute when he arrived in 1978—has introduced 92 new academic degrees, including 12 doctoral programs, and added 30 new structures to the campus famously surrounded on three sides by water and known for landmarks like its Emancipation Oak, the site of the first Southern reading of President Abraham Lincoln’s Emancipation Proclamation. The university’s reported endowment has grown from $29 million to $400 million, and average SAT scores of incoming freshmen have increased by 300 points.

Among his proudest accomplishments are the University’s scientific endeavors and partnerships including four NASA-funded satellites and the $140 million Aeronomy of Ice in the Mesosphere (A.I.M.), the first and only NASA mission fully controlled by an HBCU. In 2010, the school made history with the opening of the Hampton University Proton Therapy Institute, the first proton therapy cancer treatment center in Virginia. 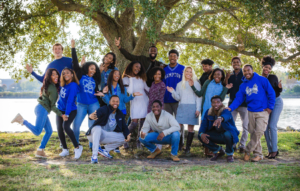 Harvey recently gave the keynote address at the 2022 American Council on Education in San Diego, where he says, “I talked to them about the importance of teamwork—how for me, the team is the dream. That collective competence is better than individual competence. I talked to them about helping others. I talked to them about being of service. I said, for example, if you really want to be great, you serve others. One of the greatest things I have ever done is the power to serve. I don’t say anything I don’t mean because I don’t have to.”

He recently announced Hampton University would open its doors to students from war-torn Ukraine, including free tuition, room and board for the summer.

Harvey has prided himself on his business acumen, boasting balanced budgets for Hampton University throughout his tenure: “My mother had a saying that I use almost daily: ‘If you’ve got a dollar, you can’t go to the grocery store and buy a dollar and 25 cents worth of groceries. You can’t buy but a dollar.’” He is also known for having independent political sensibilities and stringent—some would day conservative—expectations for student conduct. 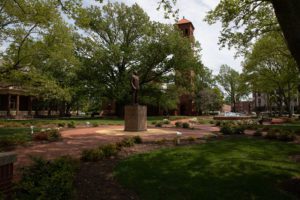 Among the most recent additions to the university’s campus environment is Legacy Park. Unveiled in 2019, this beautifully landscaped park features a collection of 13 sculptures of men and women with ties to the school, from historic figures such as  Rosa Parks and Frederick Douglas to notable alumni like mathematician Mary Jackson of Hidden Figures fame to U.S. presidents including Barack Obama and George H. W. Bush.

The park’s two most prominent sculptures represent Harvey and the school’s founder, Samuel Chapman Armstrong, after whom Harvey says he modeled his own presidency. Armstrong’s vision for educating freed slaves—and notably Native Americans—led to the establishment of the Hampton Normal and Agricultural Institute (now Hampton University) in 1868.

“Armstrong, when he founded Hampton, said ‘I want my institution to emphasize two things: one is topflight academics’ (today that would be called workforce development),” Harvey explains. “’And two, he said, ‘I want it to emphasize the development of character.’” But Armstrong was quick to clarify that character was the most important of the two. “I have followed his playbook,” Harvey says.

It is a legacy Harvey hopes will prevail once his tenure has ended: “Think about character: truth, trust, integrity, respect for yourself, respect for others and responsible personal behavior. Whomever succeeds me, I hope that they understand that because that is what has gotten us where we are today, and I hope that is what makes us continue to excel.”

As Old Dominion University welcomes its ninth president, Christopher Newport University and Hampton University prepare for the retirement of long-serving presidents, each with transformative legacies.