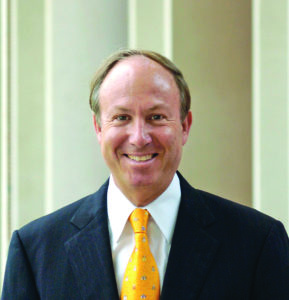 Anyone who returns to their alma mater years after graduation is bound to find new residence halls, student centers and academic buildings they don’t remember from their time as a student. The physical landscape of a college grows and changes by necessity along with its programs, the result of years of leadership and fundraising efforts, to meet the needs of students and the changing demands of the workplace and the world.

But if one were to set foot on the campus of Christopher Newport University in 1996, when its current president took office, and suddenly be transported to the same spot in 2022, they would likely find it nearly unrecognizable. And not just because of the commanding architectural presence of the neo-classical buildings now surrounding its Great Lawn, the striking Henry Cobb and I.M. Pei-designed Ferguson Center for the Arts, or the brand-new Torggler Fine Arts Center with its cascading glass domes. But because this once sleepy Newport News commuter college and its Captains—who, by the way, took home the school’s first national athletic championship in 2021 thanks to their women’s soccer team—have demanded that the world stand up and take notice.

And they have found an unflinching champion in Paul Trible, Christopher Newport’s fifth president and a former Republican politician who served in both the U.S. House of Representatives and the Senate. After two and half decades at the helm of CNU, Trible recently announced he would retire at the end of the 2022 academic year.

“Twenty-six years ago, we set out to build another great university for America,” Trible says. “We rejected the notion of incremental progress and said we are in the business of dramatic transformation and everything we do will be done at the highest levels of excellence. That audacious vision has become reality.”

Whatever skepticism there may have been about the idea of a politician without the academic background typical of most public college presidents taking on such a role, there is no denying that audacious vision has translated into a transformational legacy for the school, its students and the community. 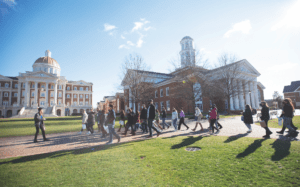 Along with a team he is quick to credit, Trible was able to capitalize on his experience in public service and connections in Richmond, Washington and beyond to do what may have seemed unlikely—if not impossible—to many. The numbers speak for themselves.

As of 2020, CNU’s fulltime student enrollment had grown to 4,730, compared to 2,920 in 1996, a 61% increase. In the same time span, their average incoming freshman high school GPA rose an entire grade point, their four-year graduation rate skyrocketed from 11% to 69%, their full-time faculty roster went from 166 to 287 and their library volumes more than tripled to well over one million.

During Trible’s tenure, there has been more than $1 billion in capital construction at CNU, including more than 40 building projects, and the campus has expanded its footprint from 100 to 260 acres. And then there are the all-important institutional financial figures: a current operational budget of $172 million (compared to $34 million in 1996) and an endowment that has ballooned from $300,000 to $50.7 million.

“Christopher Newport now stands in the ranks of the finest schools in America,” Trible says. “We offer great teaching, small classes, rich and rigorous academic programs and one of America’s most beautiful campuses. We have attracted outstanding students and faculty and built world-class facilities…that so enrich the life our community.”

Trible will remain onboard as the university’s chancellor until 2023. Adelia Thompson is currently serving as interim President and CEO while the search for a new president is underway. Trible’s decision to retire was driven in part by a desire to spend more time with his family, including his wife Rosemary, who has struggled with an ongoing illness. In February, a bipartisan delegation of state senators honored the outgoing president and his wife for their service on the floor of the Virginia Senate.

So, what’s next for CNU? “My successor’s task will be to sustain and strengthen and build on the excellence of the institution,” Trible notes. “That will mean increasing fundraising, building the endowment, providing more dollars for scholarships and supporting and strengthening our programs in leadership and service.”

Trible calls his time at CNU “the most meaningful, rewarding and consequential years of my life” and says he is “most grateful for the young women and men who have graced our campus and brought CNU alive with their energy, enthusiasm and intellect.” 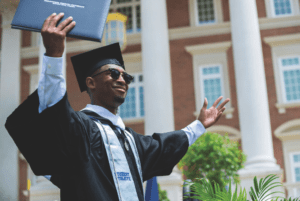 Having personally awarded 25,000 diplomas during that time, he says it has been his great honor to “watch our graduates lead, serve, love and set the world on fire.” He is also particularly proud of a campus culture in which he says colleagues “share a common sense of purpose and unselfishly work for the greater good.”

“Much of the success is the result of love and trust,” he explains. “Love for a university that was seeking its place among the finest in the nation and an absolute trust between the governing board, its president and the faculty and staff that the liberal arts are the cornerstone of our future and that leadership, honor, service and excellence are the values that we embrace and instill in our graduates.”

As Old Dominion University welcomes its ninth president, Christopher Newport University and Hampton University prepare for the retirement of long-serving presidents, each with transformative legacies.