Trending Now
Protecting Patient Data
Market Report: Health Care
How to Find Pandemic Relief with the Help...
Millennial Personal Appearance and the Law
Hacking is Becoming Less Human, More Robotic
Impacting the Workplace Loneliness Epidemic
Ransomware: What It Is, How to Avoid It...
Using Technology to Increase Employment Opportunities for Veterans
How Technology Has Caused a Shift in Marketing...
Out-of-Network Follies with Health Insurance
Biz ReportWhat's On Your Desk?

Named for Civil War ships and born from entrepreneurship, Ironclad Distillery Co. is the first distillery to take charter in Newport News, reviving Virginia bourbon on the bank of the James River in the prodigious 30,000-square-foot Paul Davis warehouse built in 1913. The distillery is family-owned, pulling from each member of the Ironclad crew’s talents. Kara King manages the distillery’s marketing, while her father, Stephen (who coincidentally shares a name with the author), founded Ironclad with a prolific knowledge of bourbon alongside Kara’s brother Owen (an even more ironic coincidence of sharing a name with the author’s son), who crafts their recipes and distills their spirits. “Our Christmas Tree looks like a liquor store underneath it because we just exchange bottles of bourbon we’ve found along the way,” Kara says, amusedly. She describes her office as having a quality of “rustic luxe,” with a tiled and framed black-and-white sketched picture collage of the ironclads, vintage black leather sofa, Sputnik chandelier and an antique wooden desk. 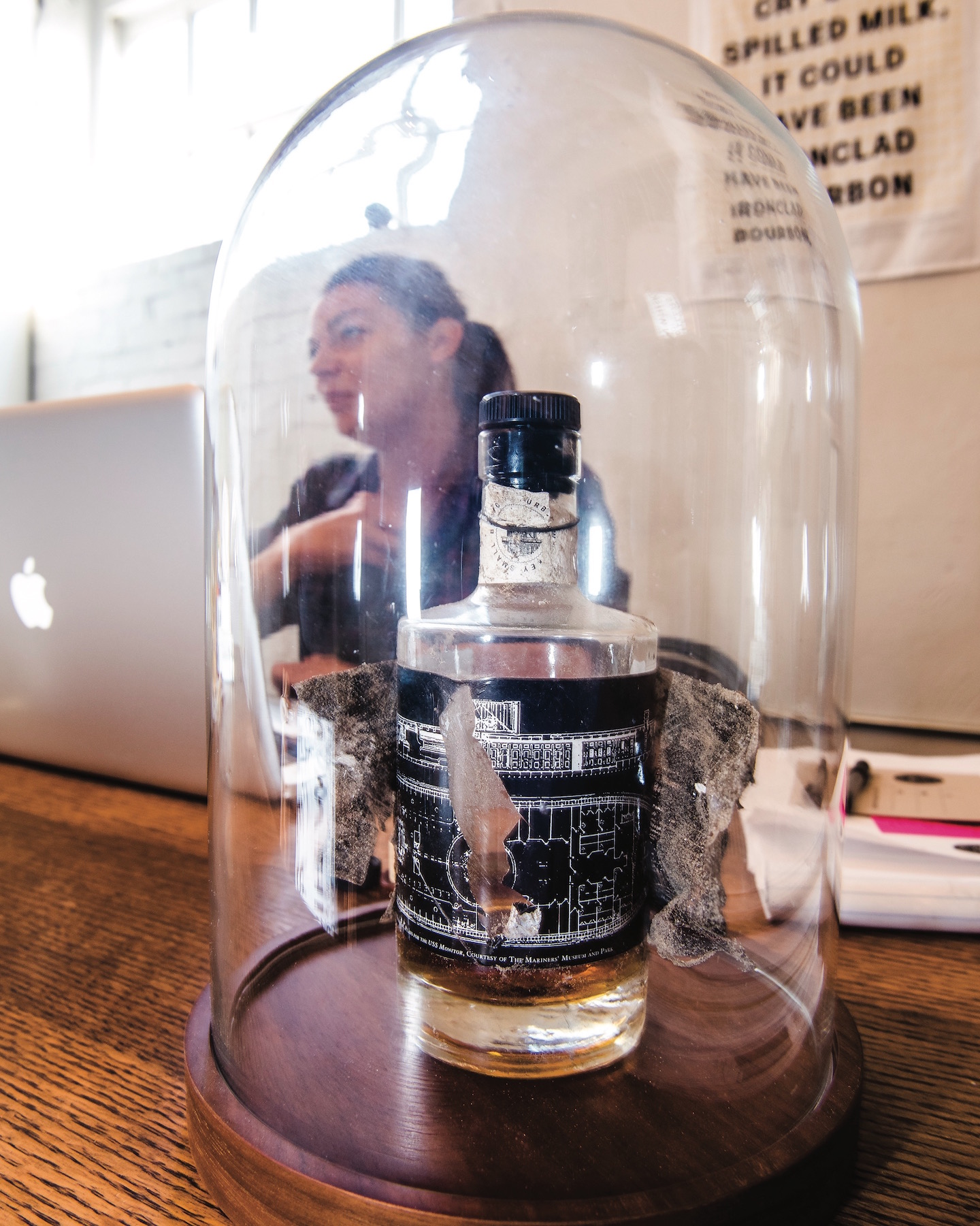 As a part of a long maintained superstitious Southern ritual, this particular disheveled bottle of Ironclad Bourbon was dug up from the dirt of the Earth. “You bury a bottle of bourbon upside down in the ground, a month before your wedding date, [and] it’s supposed to guarantee good weather on your wedding date,” Kara explains. Owen exchanged vows in April and buried this bottle a month beforehand. Despite the extra aging beneath the soil, the ceremony was met with all-day rain showers as the bridal party took dividends from this bottle. “We didn’t care because there was bourbon in the end,” Kara chuckles. 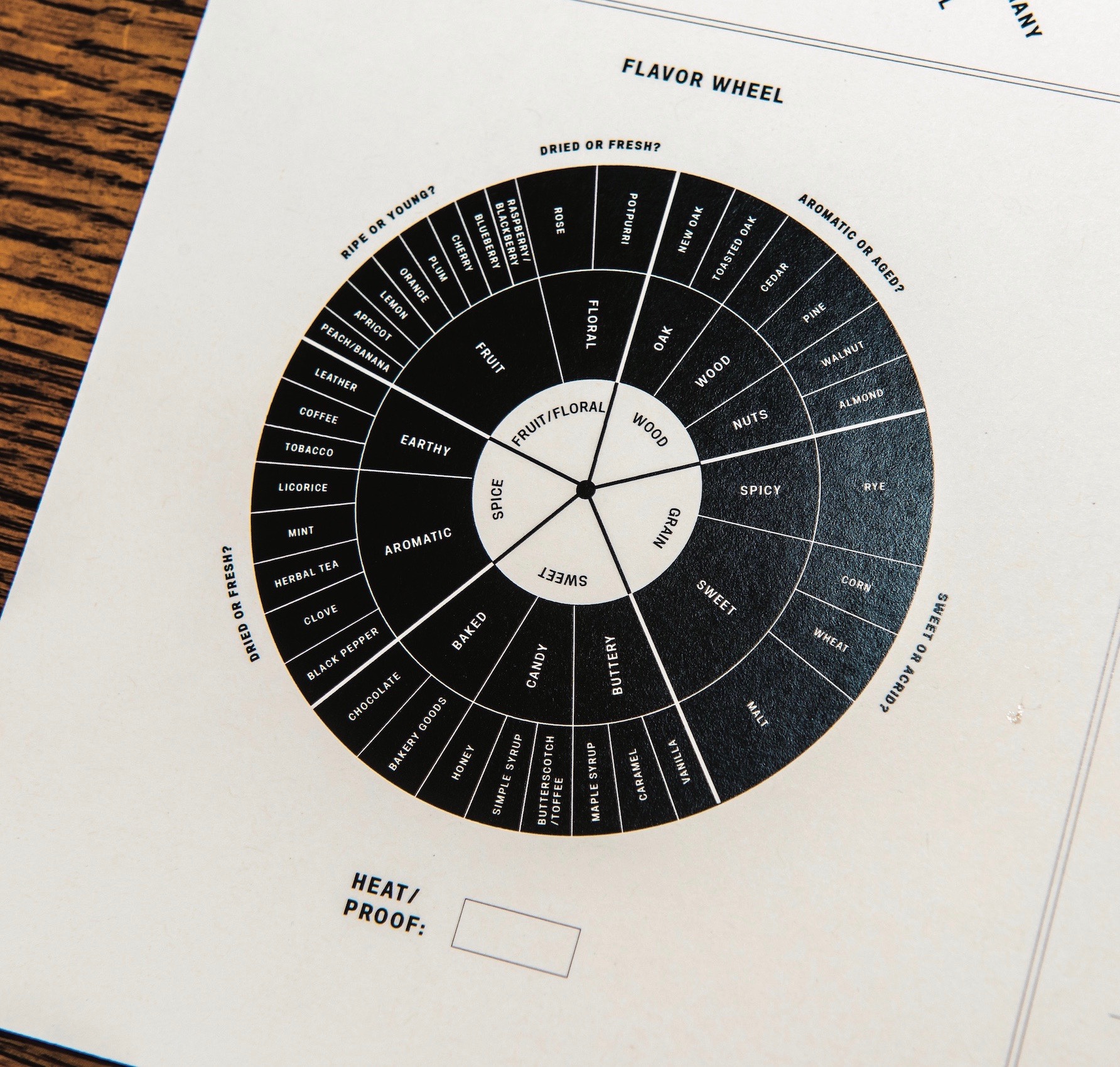 Kara’s personal cheat sheet for Ironclad Bourbon tastings, the bourbon flavor wheel is a liquor lovers’ liaison for the palate, identifying first the taste in the center of the wheel as either fruit/floral, wood, grain, sweet or spice before covering a subsequent radius of more acute flavors. As you scribble your tasting notes, you can simultaneously levy the whiskey’s tinge on the color meter. “When you do pour a glass of bourbon, if you just move it around the glass a little bit, they have what are called legs; it’s just that stuff that sticks on the side of the glass like wine,” Kara describes, as she enlightens us on how to peg the bourbon’s age without asking. “If the legs are really skinny and fast, if they run really quickly down, that’s the younger bourbon. If they’re fatter and slower, that’s older because there’s more oils that came from the barrel in there.” 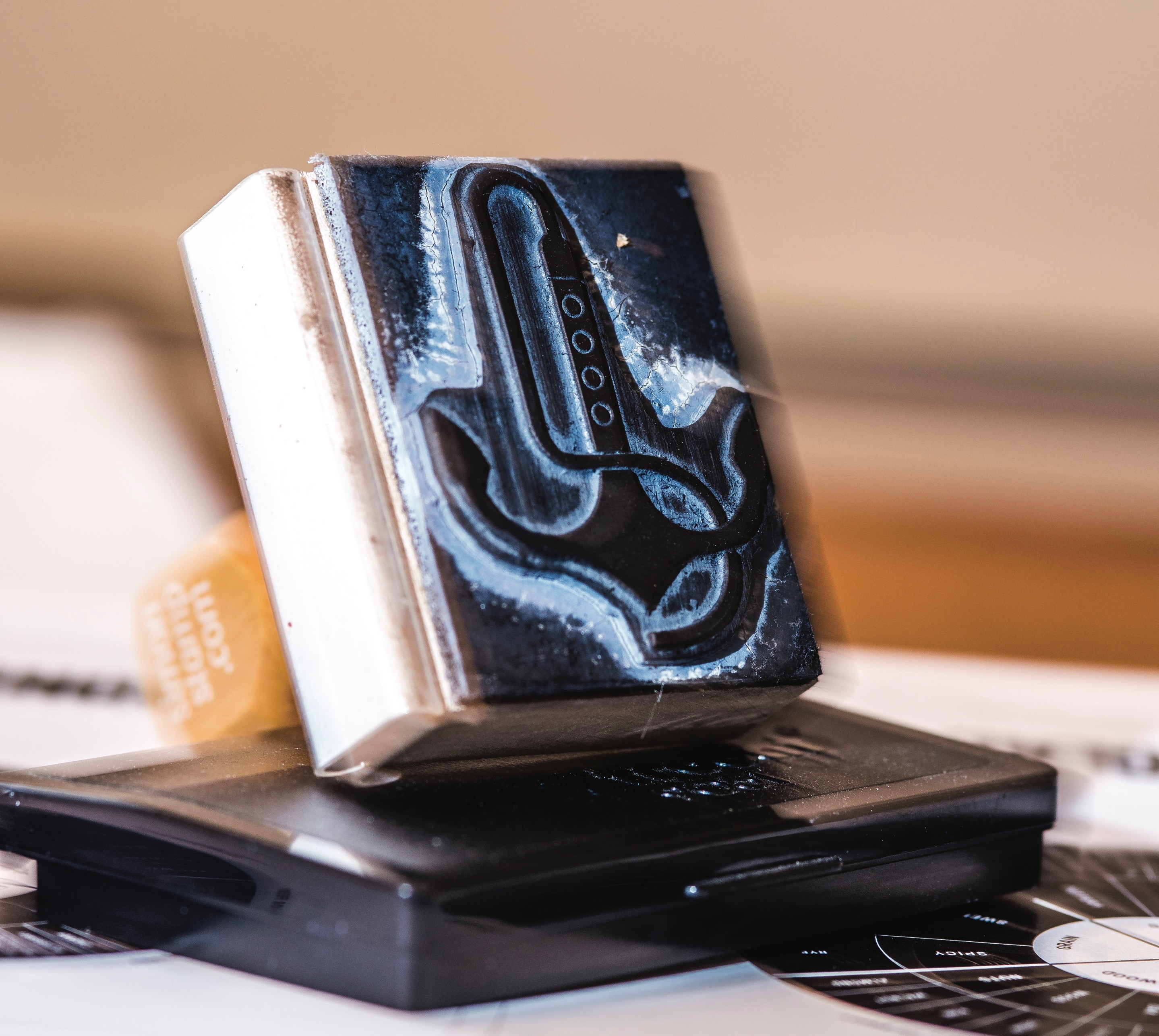 Whenever Kara writes a letter, she stamps it with the Ironclad Distillery Co. emblem, which is a still wearing the guise of a ship’s anchor. Handcrafted could easily be considered a catchall catchphrase at Ironclad, as the King family does nearly everything with sleight of hand, from Owen waxing each bottlecap to Kara writing all of the batch notes inscribed on their labels. Their brother, Ben, designed the emblem. 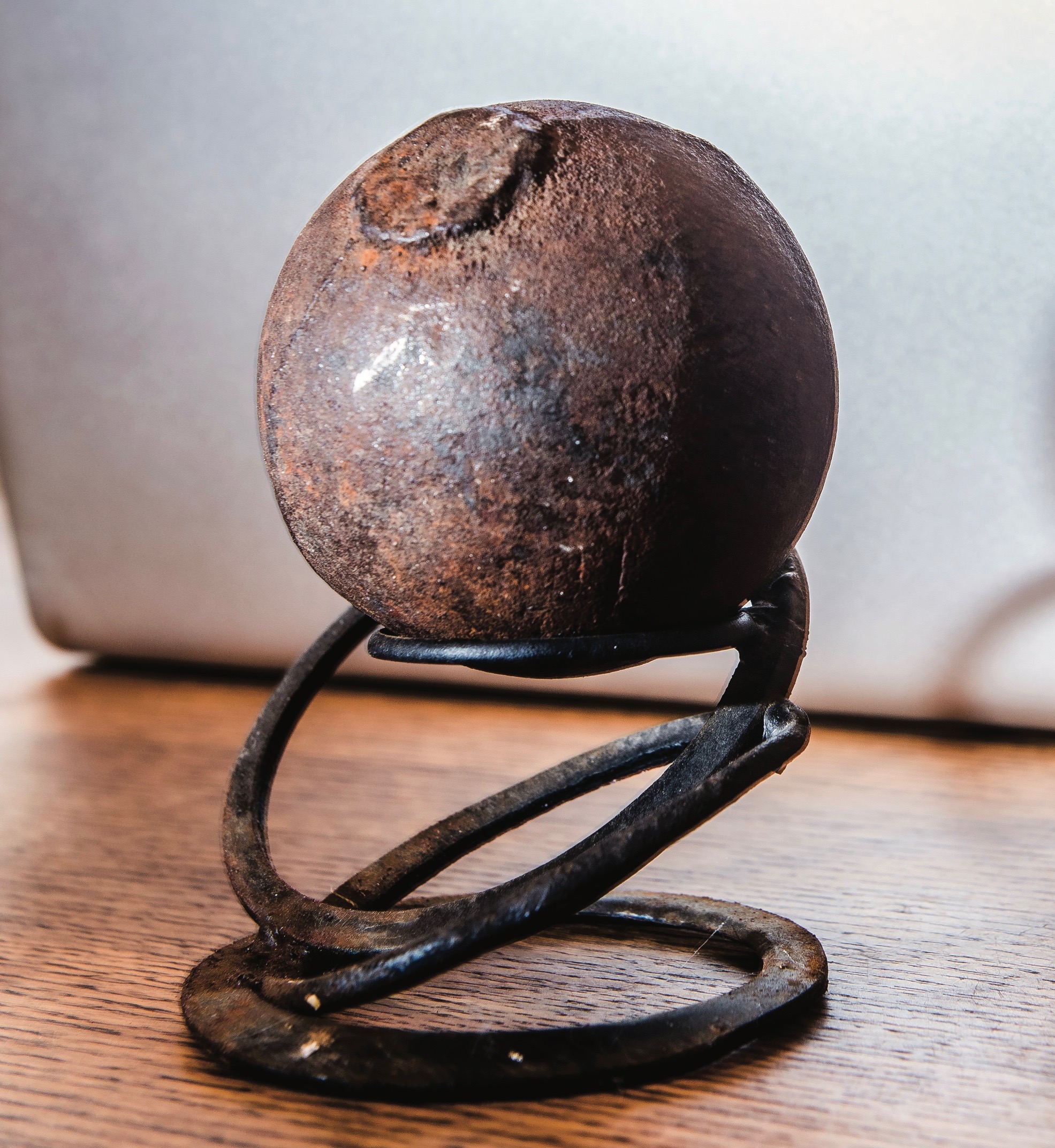 The rusted battle slug, possibly a badge of the Civil War, perhaps was launched or lugged from the James River during the drawing duel between the ironclads USS Monitor and CSS Virginia. While that may seem like a foolhardy foregone conclusion, the round shot, now a fine desk prop and glorious paperweight, was in fact found within the historic Paul Davis building. The erstwhile grocery store and dry goods warehouse is beside an old railroad track where cars would unload their freight. The building was originally constructed and owned by S. W. Holt & Company and run by the Holt brothers, with Saxon W. Holt presiding as a member of the Virginia Senate and Lieutenant Governor. 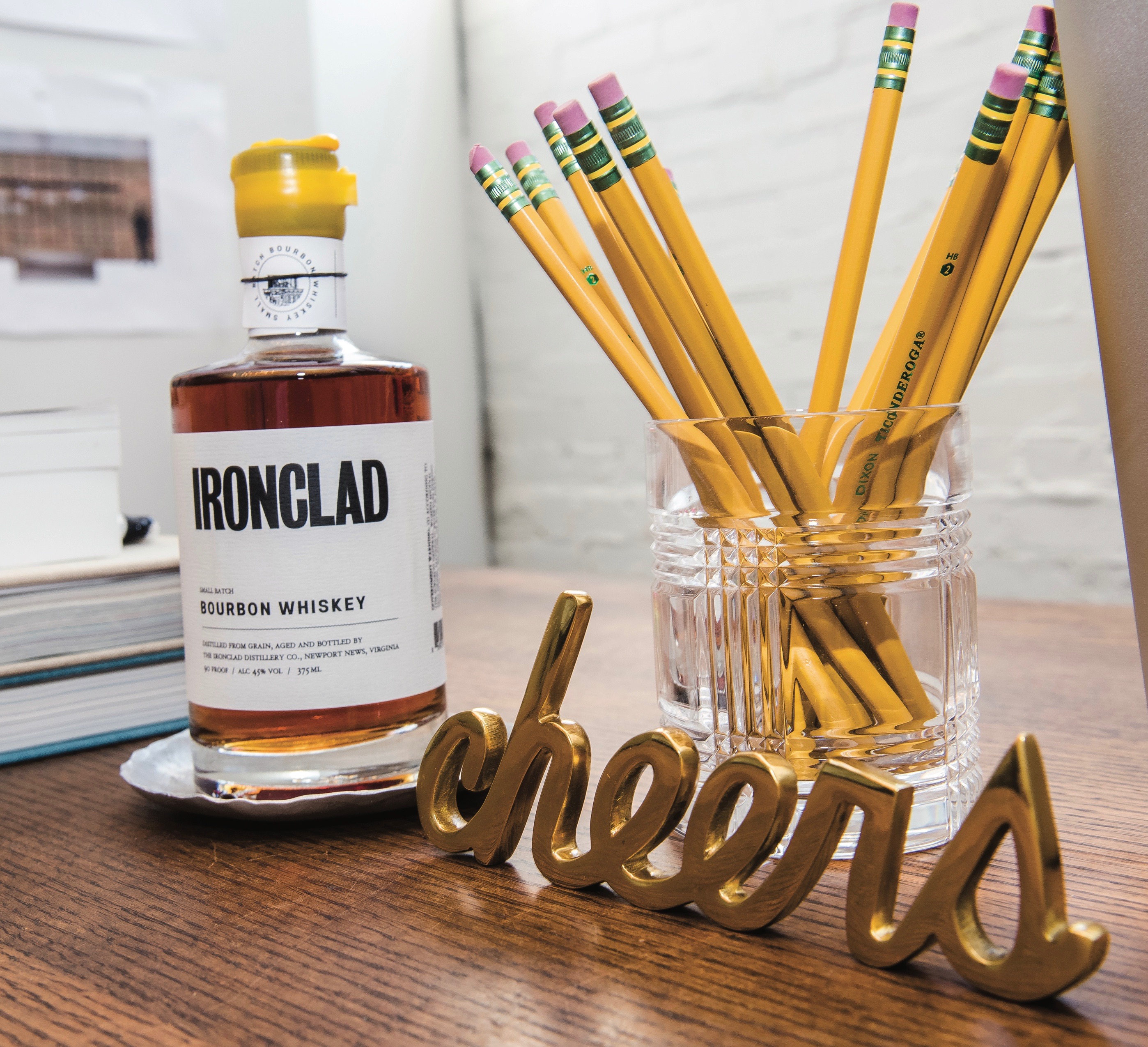 “We only do bourbon because that’s what we have a passion for,” Kara says. There’s no brevity with laborious whiskey making, as Ironclad’s bourbon is patiently made over the course of two to four years while adhering to the strict rules for making the libation. Bourbon must be made in the U.S., contain a grain mash that is 51 percent corn, is aged in virgin charred oak barrels and is distilled at no higher than 160 proof alcohol, barreled at no more than 125 proof alcohol and bottled at least 80 proof alcohol. Each bottle of Ironclad has a scroll label that folds out with a blueprint of the USS Monitor procured from The Mariners’ Museum. As for the rich bronze beverage itself, let it sit within a Glencairn glass before taking a swig. “The tulip shape will pull the aromas up so you can really get the nose on it,” Kara says. Allowing the whiskey to rest in the glass will oxygenate and open up the spirit. “If you taste it right out of the bottle and then you let it sit for a little bit, you’ll notice the difference.” 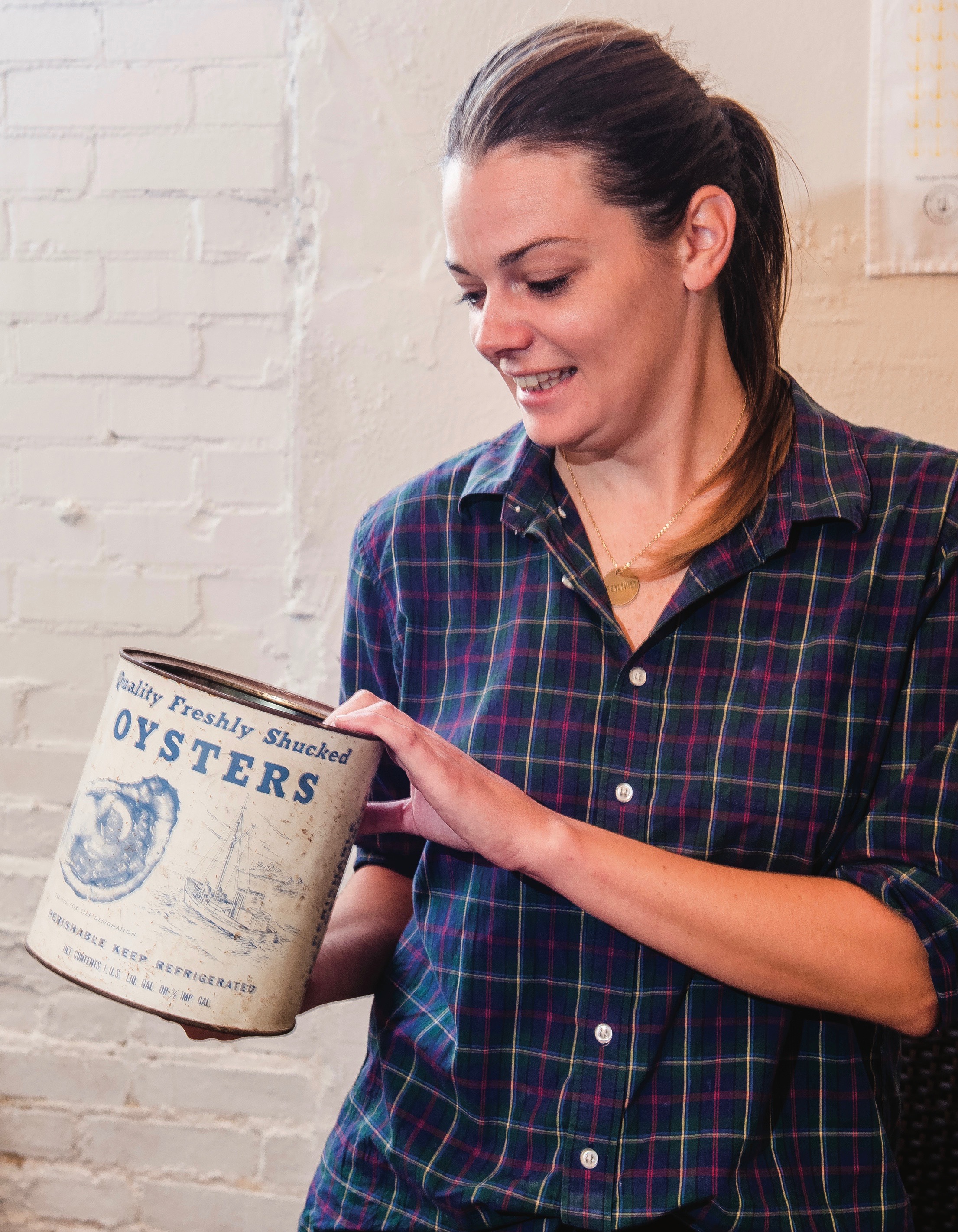 “Back in the Civil War era, Navy seamen used to hide bourbon in oyster tins in order to smuggle it onboard the ships, so that’s a nod to that,” Kara indicates. She’s well read with her history books, as her mother, Carol, was a high school librarian, and has frequented The Mariners’ Museum while learning more from historian, author and Director of the USS Monitor Center, John V. Quarstein.