Trending Now
From Livable to Luxurious
Protecting Patient Data
Market Report: Health Care
How to Find Pandemic Relief with the Help...
Millennial Personal Appearance and the Law
Hacking is Becoming Less Human, More Robotic
Impacting the Workplace Loneliness Epidemic
Ransomware: What It Is, How to Avoid It...
Using Technology to Increase Employment Opportunities for Veterans
How Technology Has Caused a Shift in Marketing...
Beyond The BizBusiness Profile

What began more than 60 years ago as a sleepy airfield sporting grass runways and gravel roads, has since become a major transportation hub. Under the leadership of the Fox family, Hampton Roads Executive Airport—a privately-owned, public use facility located in Chesapeake—has become more than an airport; it is a thriving platform for regional economic activity and job creation. 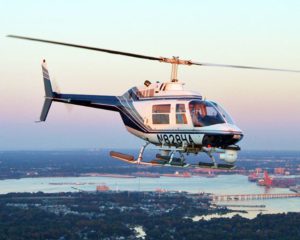 Steve Fox, principal and owner of Hampton Roads Executive Airport, is a third generation pilot whose grandfather flew military aircraft during WWI. After the war, as a food company executive busy building the Austin Biscuit Company, his grandfather would fly his airplane onto Suffolk’s legendary peanut fields to inspect the crops.

Steve’s father, also a food company executive, was a civilian pilot who owned two corporate planes which he flew as he was growing the Fox Quality Baking Company. Since both aviation and entrepreneurial strains run through the Fox family’s DNA, it’s not surprising that Steve’s son Luke represents the fourth generation of aviation executives as HREA’s director of operations, with Steve’s wife Elizabeth serving as marketing director.

“Though as a family we’d always been a part of the aviation community, the notion of owning an airport wasn’t something that was on our radar from the beginning,” Steve explains. “But because of various changes in the airport’s ownership and through a serendipitous series of events and fortuitous relationships, we now own one of the two busiest, non-towered airports in Virginia, and we’re currently designated as a reliever airport for Norfolk International Airport. 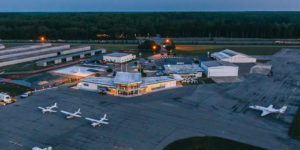 Since taking ownership in 2000, the family has transformed the entire facility. In 2011, they opened a state-of-the-art terminal facility housing administrative offices, a conference room, and a comfortable lounge for pilots and crew. Contemporary in design, with huge, sparkling glass windows, the space has an airy, timeless quality.

In 2014, they opened a new, extended 5,350-foot runway constructed with the support and guidance of multiple state and federal organizations. Currently, the 634-acre complex comprises 550,000 square feet of individual and corporate hangars, ample office and warehouse space, fueling and maintenance facilities, and administration and maintenance buildings. “Our specific type of facility is unusual in the state of Virginia,” Steve notes. “You can actually land a 737 on our runway.” 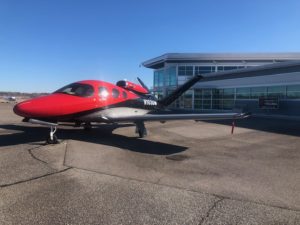 Because the airport is privately owned, the Fox family is free to do what they do best—dream, plan and execute. Steve explains that their business model allows them to be more agile, to gain access to resources more quickly, and to expedite new projects and initiatives. Plans are in the works for an airport facility expansion that includes a 350,000 square foot hangar development, installation of a new beacon, an aircraft wash rack and fuel farm, and an apron rehabilitation project. These improvements are designed to attract new businesses to the region and accommodate forecasted demand for General Aviation facilities. “We’re the kind of family that likes to bring ideas to life,” Steve says. “Our goal is to grow every day.”

But the Fox family view themselves less as owners and more as good stewards of the airport. “Odd as it may sound, we aren’t actually in the aviation business,” Steve continues. “We’re in the business of providing the infrastructure that aviation-related companies need during each stage of growth. We’re actually a business incubator of sorts, and our success is due in part to the fact that we’ve created the kind of atmosphere that drives innovation. We listen to the business owners based at our facility, and we’re responsive to their needs as their companies expand.” 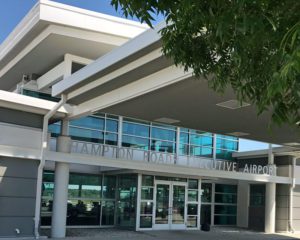 Indeed, a growing part its business comes from tenants who run their companies out of Hampton Roads Executive Airport. More than 15 businesses and several nonprofit organizations call the airport home, and the facility’s expansion means that additional companies who’ve expressed interest in offices or hangars there can be accommodated.

Since 2019, Capt. John Romano and Wayne Souza of Aloft Aviation, have been operating their private charter business out of the airport. Romano shared what makes this unique airport so special. “First, it’s a beautiful, dual runway facility,” Romano explains. “The location is central to all of the mid-Atlantic, and since hangar space is at a premium in the region, the expansion of the complex will make it attractive for more companies to do business in our area. Aloft serves corporate executives, professional athletes, entertainers, and other clients who view time as an investment. It’s important for us to have a prime location with all the amenities. Hampton Roads Executive Airport provides everything our company needs to thrive.”