Trending Now
Protecting Patient Data
Market Report: Health Care
How to Find Pandemic Relief with the Help...
Millennial Personal Appearance and the Law
Hacking is Becoming Less Human, More Robotic
Impacting the Workplace Loneliness Epidemic
Ransomware: What It Is, How to Avoid It...
Using Technology to Increase Employment Opportunities for Veterans
How Technology Has Caused a Shift in Marketing...
Out-of-Network Follies with Health Insurance
The Watercooler

The Living River Restoration Trust hosted an opening ceremony on May 8 celebrating their new land conservation nonprofit Ferry Point Park in the Woods of Avalon neighborhood in Virginia Beach.

The new park’s 9 acres of wetlands and forest will be conserved forever as part of raising awareness of the Elizabeth River’s Eastern Branch, also known as the river’s most neglected “lost branch.” As a locally based land trust, the nonprofit Living River Restoration Trust led a three-year effort to preserve the land with multiple partners. 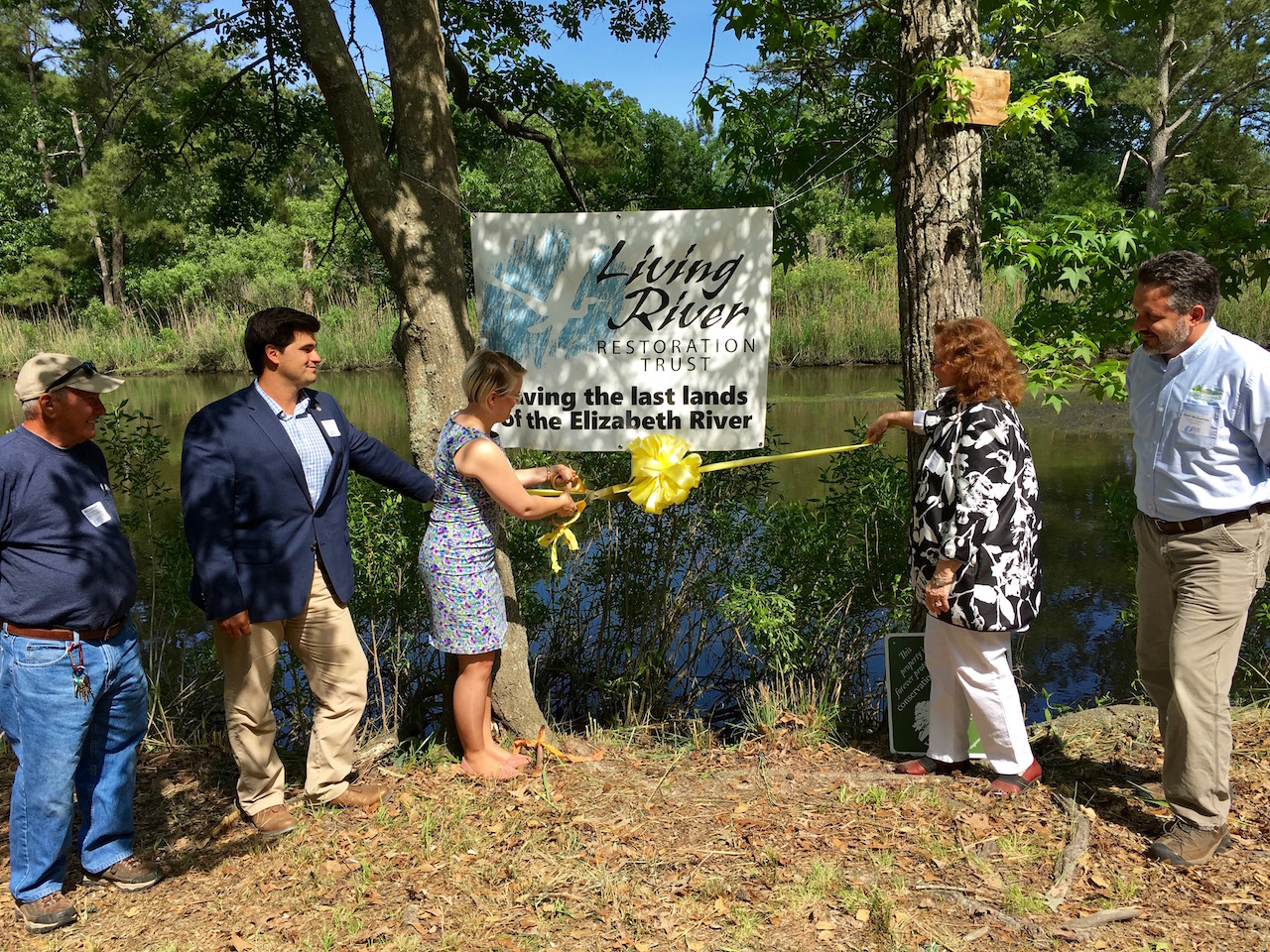 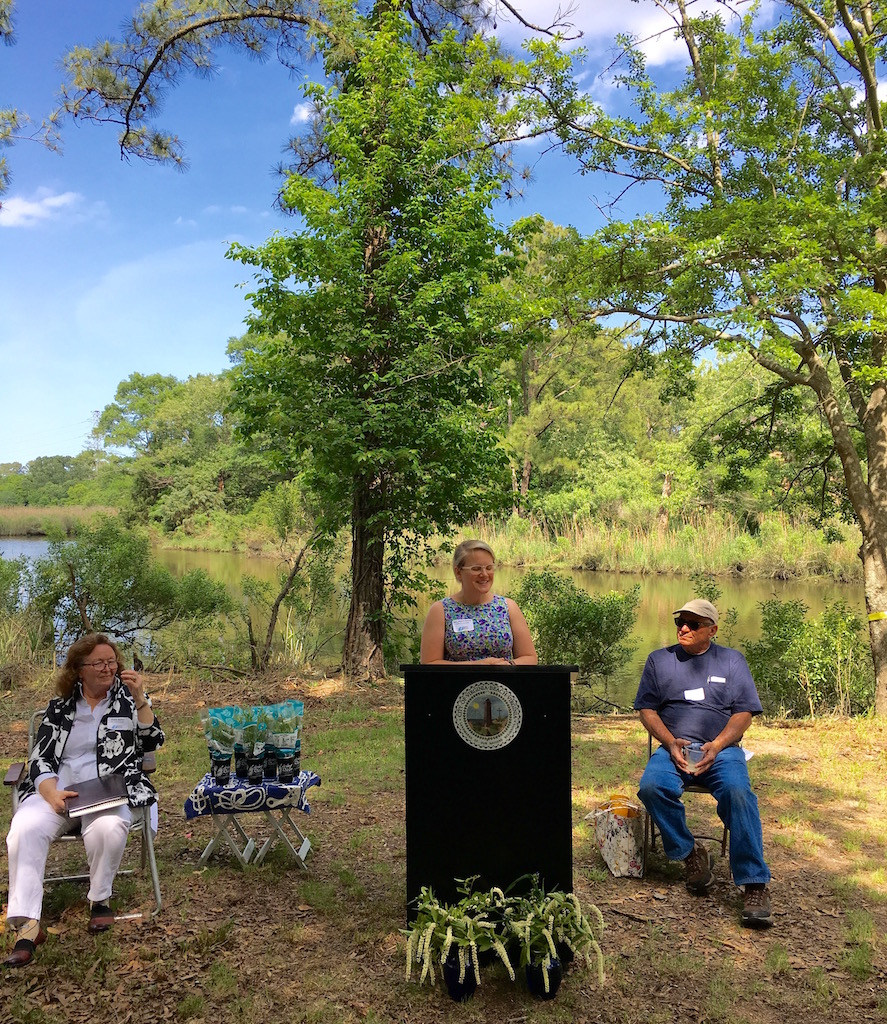 Virginia Beach City Councilwoman Jessica Abbott led the ribbon-cutting ceremony with project partners onsite. Abbott’s support through the City has been pivotal to the park’s establishment. Abbott added, “This is where families get to be families without diversion with nature and really appreciate the things that are simple.”

Diana Bailey, chair of the board of the Living River Restoration Trust, gave the ceremony’s opening remarks while acknowledging the significance of Ferry Point Park to the Trust’s mission. “We know how important land is, we’ve come to call it the most endangered species because less than 10 percent of undeveloped land is available now in the Elizabeth River watershed,” Bailey stated. “This site is especially important to the restoration of the Elizabeth River’s beleaguered Eastern Branch,” said Bailey. “The Elizabeth River Project has declared [the Eastern Branch] the ‘lost branch,’ and that’s one of the ones they want to try to raise the visibility of and help reduce pollutants in that branch of the river.”

Virginia Land and Water Conservation Board Member Jay Ford spoke on behalf of the organization and their top funding to purchase the site. Ford asserted that the project, “reflects where we need to go particularly in the face of resiliency for our neighborhoods,” and hopes that the Ferry Point Park project will serve as a model that can be replicated in other regions focusing on conserving smaller parcels of land.

Jason McGarvey, communications and outreach manager for Virginia Outdoors Foundation, gave remarks during the ceremony as the Foundation helped with funding and holds a permanent conservation easement on the park. McGarvey stated that open spaces such as Ferry Point Park are critical to our mental and physical health, important educational resources for our communities, recreational resources and support economic development through tourism. McGarvey maintained, “This project fits completely with our vision with what community conservation is all about, which is helping a community achieve its goals.”

Skip Coleman, president of the Woods of Avalon/Avalon Terrace Civic League, also supported the project through input from the neighborhood and spoke during the ceremony. 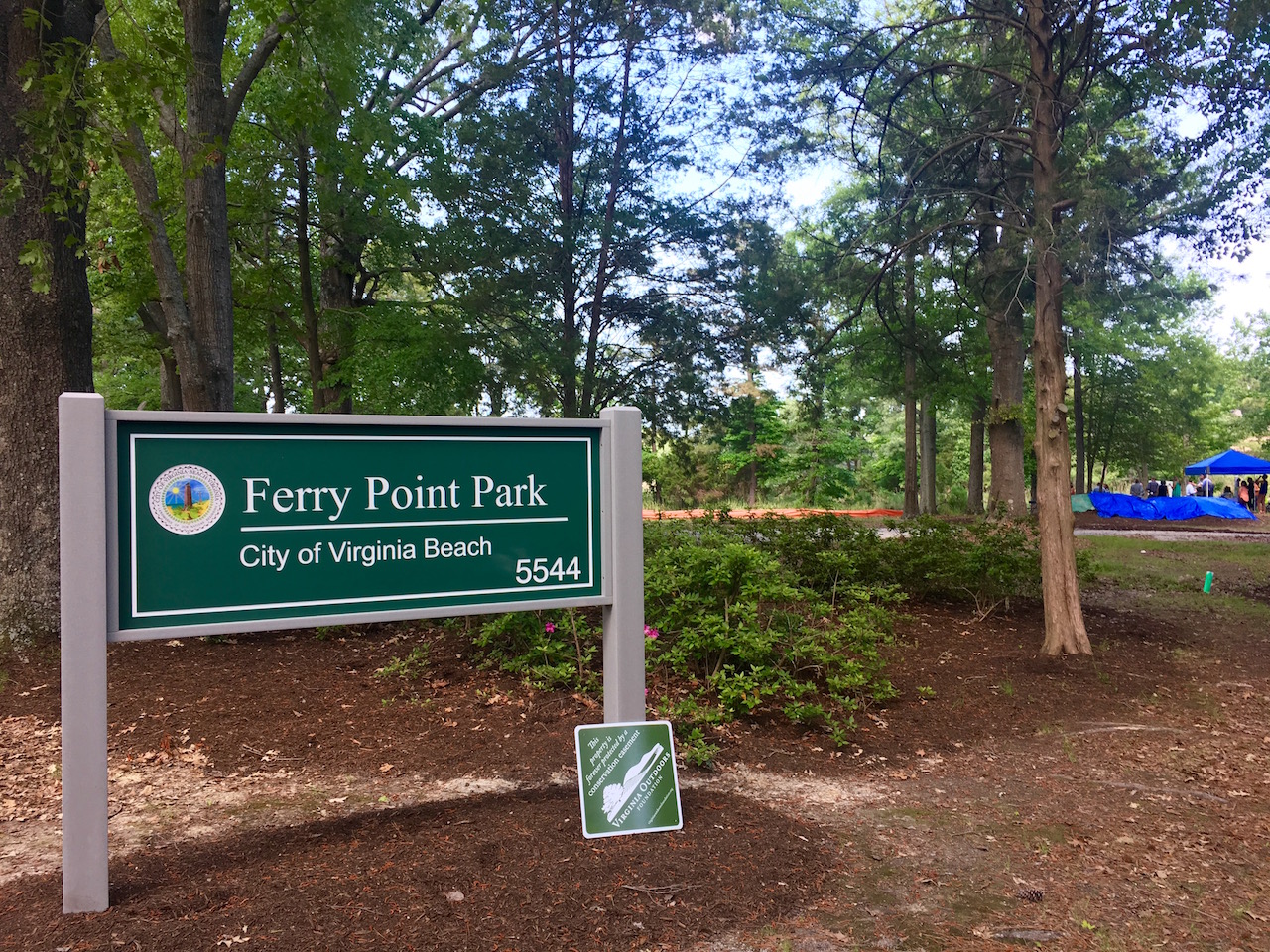 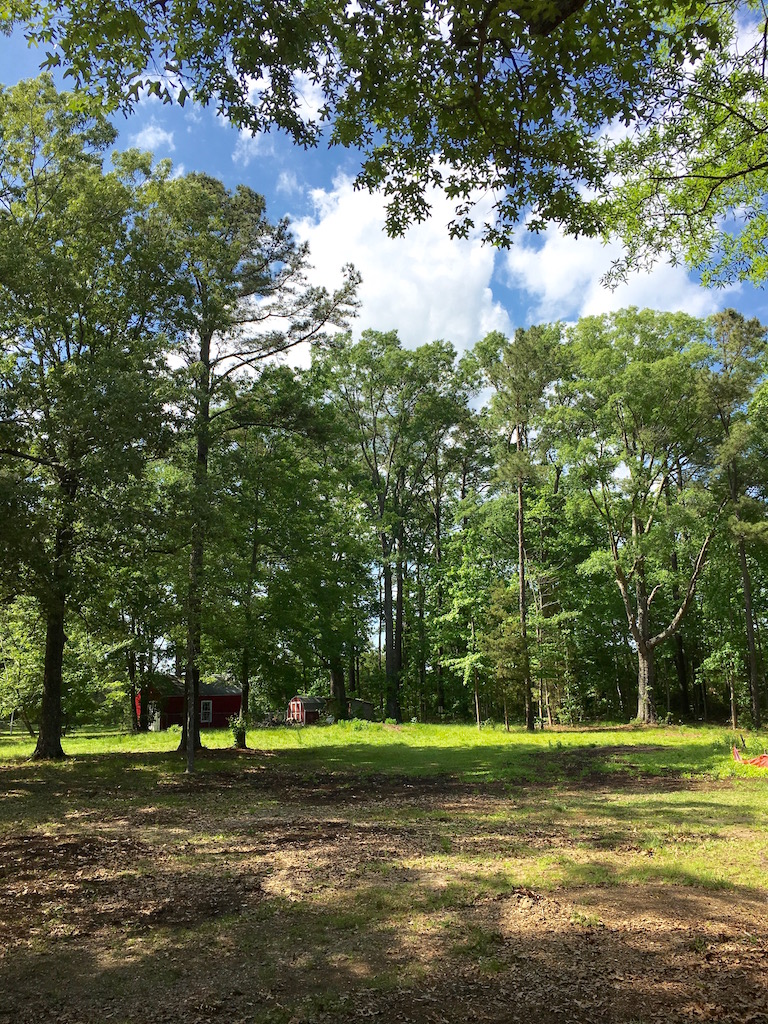 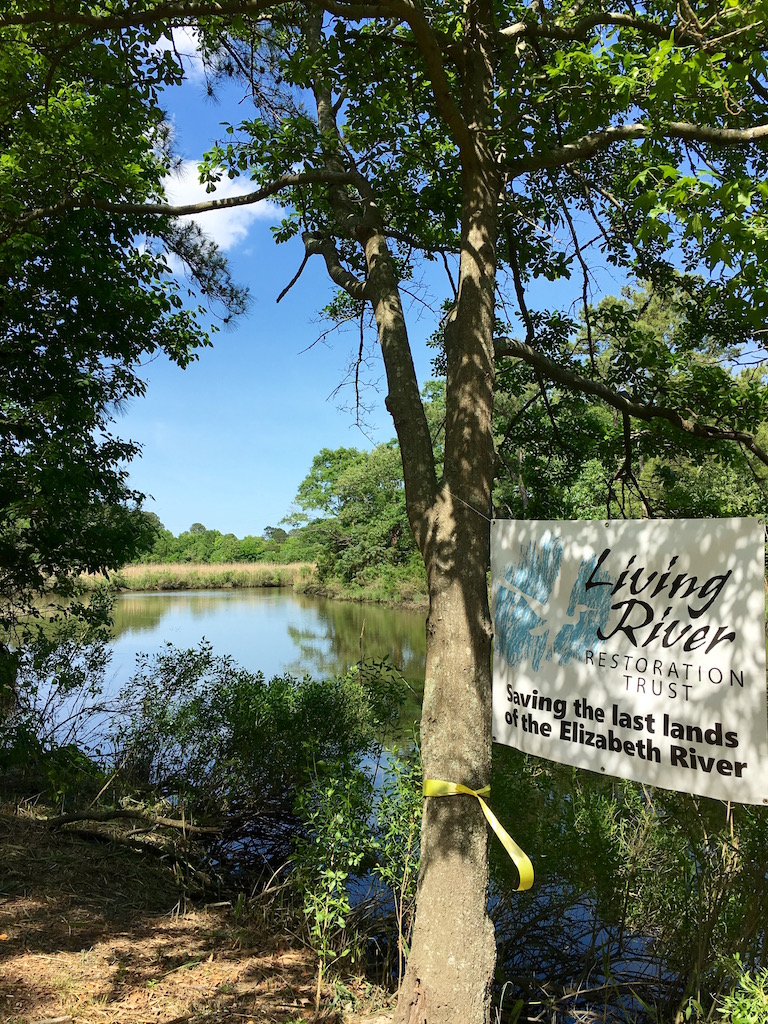 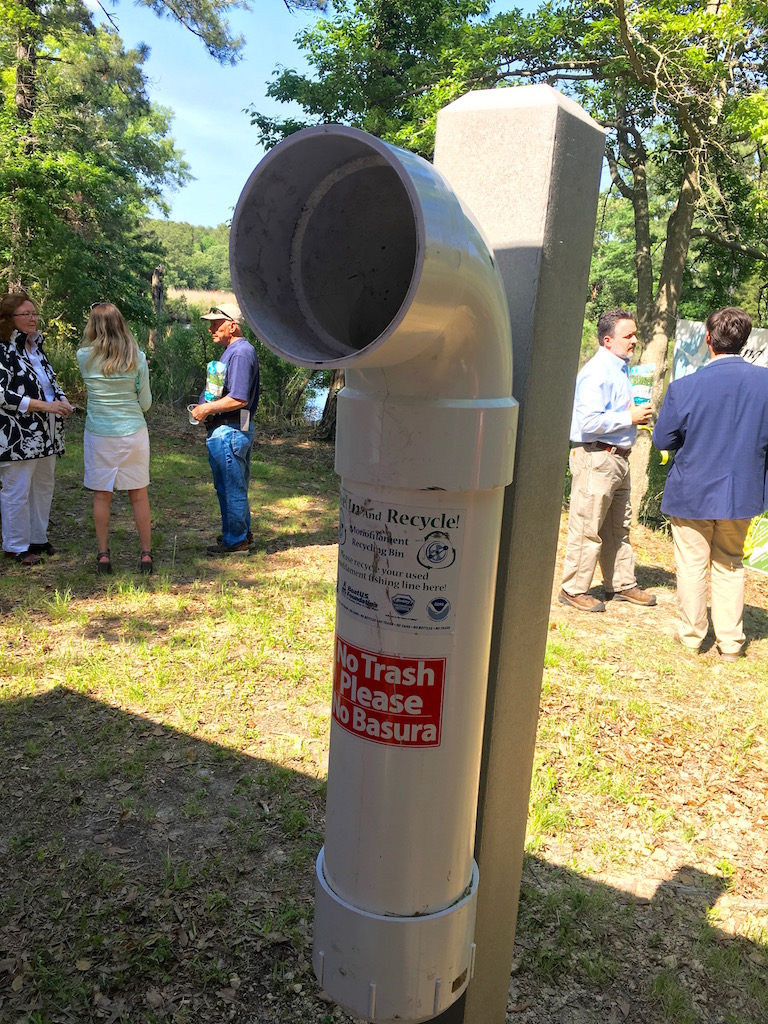 The Living River Restoration Trust has conserved more than 600 acres to date, while Ferry Point Park is the Trust’s first site on the Elizabeth River’s Eastern Branch. The Trust bought the site in 2018 from Virginia Beach resident Wayne Doolin for $265,000, securing $141,525 from the Land and Water Conservation Fund, $73,475 from the City of Virginia Beach Open Space Program and $50,000 from the Virginia Outdoors Foundation.

The Trust gifted the land to the City after donating significant project management and legal and real estate assistance. The City of Virginia Beach will operate the park and contributed purchase funds along with the Land and Water Conservation Fund, administered by Virginia Department of Conservation and Recreation, and the Virginia Outdoors Foundation.

The City removed a dilapidated house on the site damaged from flooding, enhanced the driveway and has begun mulching trails. About 100 students from Old Donation School spent Earth Day improving the site with City staff. A new fishing line receptacle was installed as a student project encouraging proper disposal of fishing lines. As funds become available, the park will offer the first kayaking access on the south shore of this branch as well as interpretive signage and nature trails.