Trending Now
From Livable to Luxurious
Protecting Patient Data
Market Report: Health Care
How to Find Pandemic Relief with the Help...
Millennial Personal Appearance and the Law
Hacking is Becoming Less Human, More Robotic
Impacting the Workplace Loneliness Epidemic
Ransomware: What It Is, How to Avoid It...
Using Technology to Increase Employment Opportunities for Veterans
How Technology Has Caused a Shift in Marketing...
Special Sections

Downtown Norfolk is a Great Place to Live and Work

Founded in 1682 and incorporated in 1736, Norfolk is one of the oldest cities in Coastal Virginia and is currently the second most populous city in the entire Commonwealth of Virginia, behind only Virginia Beach. Bordered on one side by the Elizabeth River and another by the Chesapeake Bay, Norfolk’s natural harbor was the perfect place to establish the world’s largest naval base, as well as a growing port of call for luxury cruise ships.

“More and more European cruise lines are choosing Norfolk as a port of call because they are branding us—and rightly so, by the way—as the birthplace of America,” says Stephen Kirkland, executive director of Nauticus. “Jamestown is just down the way a bit, and Norfolk has been a port longer than Charleston or many other places. We tell that story loudly and proudly because if you think about it, Thomas Jefferson would embark on vessels in Norfolk to go to Paris. George Washington, as a young surveyor, came right down the very river I can see from my office right now. So, we really do have some amazing stories to tell, and that’s resonating with our European guests.” 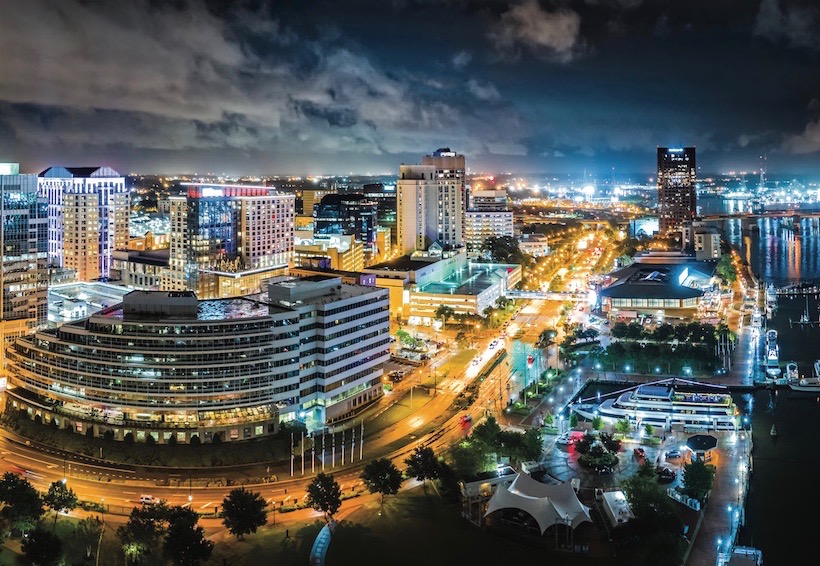 Norfolk has been a port of call for cruise ships since 1996, but it’s only been in the last five or six years that it has become a sought-after destination. “Norfolk, as a cruise port, exceeds passenger expectations and has what many other ports can’t offer because the ships come right to the downtown area,” says Kirkland. “Cruise lines, when they have a port-of-call, they want two things: First, they want a diverse itinerary of scheduled tours for their guests to be able to go on. Second, they want convenience for their passengers who just want to look around. Generally, anywhere from 30 to 40% of these passengers are taking a tour. They might go to Williamsburg or Jamestown, many of them take the Norfolk Highlight Tours that are offered, the Germans are famous for their bike tours around town, but they take a guided tour. That means upwards of 60 to 65% of those guests are walking off the gangway, walking through the cruise terminal, and the world is their oyster. What we’re finding is that we’re able to accommodate both. We’re not out in an industrial warehouse like some other terminals around the country are. Passengers don’t necessarily need to take a cab or Uber to get where they want to go. They can literally walk across the street. So that’s where we found things like Waterside have helped us so much. Passengers can literally walk across the park to Waterside. MacArthur Center mall helps us tremendously, particularly with our German guests who really want to experience a proper American mall. Honestly, it’s a thing. The restaurants on Granby Street. The attractions like Nauticus. We benefit because a lot of these guests want to come and see the battleship Wisconsin and also the Chrysler Museum of Art, MacArthur Memorial and so many others. That’s where, as a cruise port, we’ve really positioned ourselves in a great spot. It’s almost a blessing of riches where these passengers can get off these cruise ships and they can do so much, and it’s so convenient and easy.”

Aside from the fantastic traffic that’s coming in from the cruise ships, obviously Downtown Norfolk is a great place to live and work, just because there is so much convenience. So even businesses that might not cater to cruise line visitors, such as law firms like Vandeventer Black LLP, a full-service litigation firm established in 1883, and Kelleter Law PC, a regional practice located just two blocks from the federal courthouse, want to be in the middle of the action.

“I can tell you from my personal perspective, that people want to be here because it’s walkable,” says Kirkland. “It’s a place where the community comes together, and it just clicks. I’ve been here for 18 years, and I have found that everybody wants to see it continue to succeed. And everyone recognizes that a rising tide lifts all ships. What’s good for one is good for others. We’re continuing to build density downtown thanks to some major investments on the apartment and condo side. We’re having more people that live downtown and work downtown, so it’s becoming a place. It’s got its own energy. That’s what I love about Norfolk. It’s got its own energy, it’s got its own vibe, it’s got its own sense of community, and I think that really resonates with people, I really do. It’s neat to be able to walk down the street at lunch time and see a dozen people that you know, that you’re connected to in one way or another through your business or as an employee at one of the businesses here. And that’s really cool.”

Langley Gives Back to the Community on MLK Day

tHRive Announces New Board Leadership for 2020

Earn a High-Demand Degree or Certification in Cybersecurity