Trending Now
From Livable to Luxurious
Protecting Patient Data
Market Report: Health Care
How to Find Pandemic Relief with the Help...
Millennial Personal Appearance and the Law
Hacking is Becoming Less Human, More Robotic
Impacting the Workplace Loneliness Epidemic
Ransomware: What It Is, How to Avoid It...
Using Technology to Increase Employment Opportunities for Veterans
How Technology Has Caused a Shift in Marketing...
Health CareMarket Report

Diversity and Inclusion in Health Care

Too real to be “trendy,” says Diane Holland of EVMS's department of diversity and inclusion

When Diane Holland walked into her department at Eastern Virginia Medical School, worry hit her.

“It looks like a jail,” she thought. “No one’s going to want to come see me.”

It was July 2021, and she had been hired as the school’s first assistant director of training and ombudsperson in the department of diversity and inclusion. Her experience led Indeed.com to ping her with the job listing—and the EVMS hiring committee to embrace her. She was working two part-time jobs, one as a civil rights investigator at Norfolk State University and another as a trainer/instructor for the Virginia Department of Social Services.

EVMS’s ask: Enhance training on diversity and inclusion and create a safe listening space for staff and faculty.

“Now it looks more like a living area in there,” Holland says, “a lot more warm.”

Her second response: Step out of the welcoming office.

She wanted to be visible, let everyone know who she is and how she can help. She reached out to fellow staffers, especially those in marketing so they could spread the word. People started coming to her, asking to better understand EVMS policies and procedures. Or agonizing over not getting along with a colleague or admitting a struggle with work-life balance. 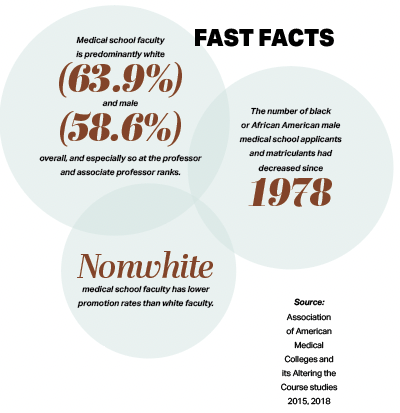 Listen, then provide resources, is Holland’s approach. “The feedback has been really good,” she says, “so I feel accomplished.”

After conducting a needs assessment, Holland, who has master’s degrees in public administration and human resource management, launched the Inclusive Excellence in Medicine training program. Four cohorts have graduated from the new, seven-session program. Either in person or online, they meet for 90 minutes for seven weeks. First, though, everyone pledges confidentiality, mutual respect and professionalism. The hope: A judgment-free zone. Holland and a psychologist encourage participants to share personal and professional experiences related to diversity, equity and inclusion. Often, they do so by asking questions, other times by surveying the group and sharing results.

Holland opens up, too. When the topic is microaggressions, she talks about her hair. People ask to touch it. They also tell her how to style it for work. Participants share similar experiences; others say they’ve witnessed such conversations and didn’t know how to respond. Occasionally, someone admits to being an offender.

Some cry. Some leave the room.

“That’s why we want to create an environment that is safe enough for you to be vulnerable,” Holland says, “and not unsafe, so that you’d feel ashamed and embarrassed, and never come back.”

The words diversity, equity and inclusion seem to be everywhere now.

“I think D-E-I is becoming something that is trendy, right?” she says. “And I don’t want it to become trendy, because it’s so real.”

Another of her experiences illustrates why opening eyes and hearts matters. At a previous job, she brought her vegetarian lunch to work every day. Her boss in the human resources department saw her, every day. Once a month, they and others gathered for a team meeting. The group lunch order didn’t include vegetarian food. Holland finally spoke up after months.

“He said, ‘I never really thought about it,’” Holland says.

Talking more, he agreed his actions were a problem.

“Some people leave jobs for things like that,” Holland says. “Not me, but people really do. Every decision leaders make, people watch. They observe their leaders at all times.”

A New Brand for Anthem

A New Brand for Anthem

Health, Wealth and Hiring a Senior