Behind the BIZ: Plasser American

How many times have you seen a train or crossed some tracks and wondered how they stay so well maintained? If the thought has never really occurred to you, you’re probably in good company. However, the people behind Plasser American think about it all the time. That’s because they build the machines that clean, stabilize and align the train tracks and Metro rails across the country that keep the trains rolling safely and efficiently.

Plasser & Theurer was formed in Linz, Austria in 1953 to manufacture railroad track laying and maintenance machines. In 1957, the first machine in the United States was delivered to the Louisville & Nashville Railroad Company. Four years later, the Plasser Railway Maintenance Corporation was founded in Rockville, Illinois and was re-named Plasser American Corporation in the mid-60s. In 1970, the plant was relocated to Chesapeake, Virginia.

“This is our fiftieth anniversary here,” says Joe Stark, Vice President of Operations and Production. “We started out as a small company. The equipment was being shipped here from Europe and we basically supported that equipment and did some light manufacturing. But the market started growing rapidly and it was decided we needed a bigger footprint to increase our own manufacturing efforts. The company needed a place that was in close proximity to the ports, had a good infrastructure already in place, was a good area to recruit, train and hire people, and had a climate that would support year-round testing of the equipment. So, they ended up here in Chesapeake.”

Coinciding with their 50th year in Chesapeake, Plasser recently broke ground on what will be their new headquarters building located in Myers Road next to Atlantic Avenue. Once the new administrative building is constructed and the employee transition is completed, they will tear down the current headquarters and part of the manufacturing facilities to add more tracks and expand their manufacturing capabilities.

“The overall goal of the expansion is to put us in a position where we can double our output through the facility,” explains Stark. “We are currently moving to more of a second-shift operation, with plans to eventually add a third shift.” The expansion will also bring nearly 100 new jobs to the area in the next three to five years. 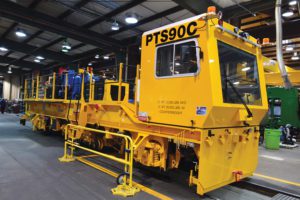 In order to meet their hiring demand, Plasser American has been approved by the Department of Labor and Industry to offer apprentice programs in machining, welding, electrical and hydraulics. They have partnered with various local colleges and career centers across the region to further promote the programs. In addition, they have also started working with the Chesapeake School System and provide tours of their operations, to help young people understand what they do and how important they are to the economy of the country.

“We provide positive reinforcement to students about what we do to build relationships with the children, their parents and the community,” says Danielle White, Project Coordinator for Plasser American. “Our involvement with the schools can nurture a connection with students who may want to come work for us one day or join our apprenticeship programs.”

In addition to providing economic development for the region and building educational relationships, Plasser American also gives back to the community. In June, they participated in Women Build Week in support of Habitat for Humanity. “We built the frame of a house for a mother and her children, not just to give back to the community, but also to show the strength of women that are here at Plasser,” White says. “These actions help to create an environment for women to empower one another, because we often get into positions where we just think what we do is not important. In this instance, we got to showcase what that we do is important, and that Plasser supports us and believes in us.”