Trending Now
From Livable to Luxurious
Protecting Patient Data
Market Report: Health Care
How to Find Pandemic Relief with the Help...
Millennial Personal Appearance and the Law
Hacking is Becoming Less Human, More Robotic
Impacting the Workplace Loneliness Epidemic
Ransomware: What It Is, How to Avoid It...
Using Technology to Increase Employment Opportunities for Veterans
How Technology Has Caused a Shift in Marketing...
Beyond The BizSuccess

From a single gas station and convenience store to 16 hotels, Pashm Global builds strong presence in and beyond the region while committing to community service

What began with a small gas station and convenience store has blossomed into a thriving Coastal Virginia-based management company with a huge portfolio of businesses. 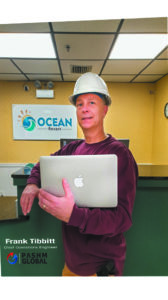 “We are building on our vast experience in hotel and resort management, retail and restaurant management, and property development to help other entrepreneurs achieve success,” says Manan Shah, CEO and managing principal.

A native of India, Shah, 40, came to the United States in 2002 with an engineering degree and “very little means.” Initially he enrolled in New York Institute of Technology to pursue a master’s degree in computer science, but a chance encounter on a subway with a military recruiter led him to join the U.S. Air Force.

After spending four years as a supply analyst stationed at Langley Air Force Base in Hampton, Shah’s passion for business and entrepreneurship prompted his purchase of the gas station and store.

He joined the Virginia Beach-based Plaza Group in 2007 where he served as a managing principal. He decided to launch out on his own last year to form Pashm Global “due to the aging of other partners and stalled progress.”

While expanding his business, Shah obtained a master’s certificate in hospitality management from Cornell University. “I’ve always aspired to learn and grow,” he says.

“I’m driven by strong moral values, such as integrity, hard work and an intense desire to selflessly serve.” Opportunities to serve became apparent during the pandemic. Partnering with Hague Pharmacy, he led a vaccination drive that resulted in more than 9,600 people getting the life-saving shots. He also helped raise nearly $200,000 for COVID relief in his home country.

“My nature is to give back to the community,” he says. “My business is perfect for me because it allows me to help people. I see customers and employees as family.”

Shah says he has an open-door policy for all employees, encouraging them to “come and talk to me regarding anything, whether it is about their personal or professional problems. Anything.” 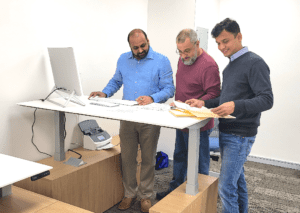 Establishing a culture where employees enjoy themselves is his goal. He has incorporated a ping-pong table and a massage chair into the office so they can de-stress.

“I don’t want people to feel that they are waiting on the clock so they can go home. I want them to refresh their minds, so they are motivated and happy.”

Shah’s civic leadership is centered on his involvement with the Hindu Temple of Hampton Roads where he serves as a board member and secretary. Temple members contributed more than 70 percent of the funds for COVID relief in India.

Shah began the effort, in part, as a memorial to his father, who died last year from age-related causes. Funds were used to purchase oxygen concentrators to help alleviate the dire oxygen shortage in India during last year’s spike.

“It was the very best thing I ever did in my life,” Shah says. “It was very chaotic at the time in India, and we heard that the machines we sent saved many people.” Shah and his wife lost several family members during the crisis.

Shah’s business associates and friends laud him as a businessman and activist. “When it comes to community service and leadership, the first person who always comes to my mind is Manan Shah,” says Terri Ruby, market president of Blue Ridge Bank. She calls Shah an asset to the community.

“As a businessman, he is hands-on, conducts business with integrity and is always responsible and reliable. As a human being, husband, father and friend, his focus is always on helping others.”

In agreement is Jason P. Magruder, account executive at Morgan Marrow Company. He calls Shah “a gentleman who has tireless energy to expand both the quantity and quality of Pashm Global’s impressive hospitality portfolio. He has shown, during an extraordinary pandemic, to be amazingly resilient with the ability to expand his business when others are struggling.” Magruder also notes Shah’s devotion to his family and worthy causes.

He is vice president of the Virginia Asian American Store Owners Association, and he chaired sponsorship and advertising for Norfolk’s annual Taste of India for two years. The event, one of the largest Asian Indian festivals in Virginia, was cancelled due to COVID for the past two years, but leaders hope to bring it back this year.

Shah’s wife, Payal, is a business analyst for a regional company. They have two children, a 15-year-old daughter, Aanya, and an 8-year-old son, Sharvil.

Not a big goal setter per se, Shah says he just intends to focus on growth, especially in the health care and hospitality sectors. “Whenever I focus on something, I’m able to succeed. I’m a very positive person and I don’t see obstacles.”

In the News: DroneUp, Index AR Solutions Joins CEWD and Ghent’s ‘The Rosalie’