Robots, Augmented Reality Changing the Way the World Works and Trains, Including in Coastal Virginia

“There was a time when companies were asking, ‘Is there a return on investment to justify this robot?’” Schultz says. “Now companies are saying, ‘I can’t even operate unless I automate something.’”

With books and training videos, “You’re not really doing much to force your brain to think critically,” Fisher says. “With AR and VR, you’re forcing your brain to react to the training. You’re not talking theory. You’re partaking of an experience.”

Robots and augmented reality are changing the way the world works and trains—as robots help to mitigate labor shortages and augmented reality provides training that is nearly hands-on without requiring travel. Coastal Virginia companies and universities are playing key roles in trends that also are driven by the effects of the pandemic and improvements in technology.

“The ultimate pain point now is access to labor,” says A.K. Schultz, co-founder and CEO of SVT Robotics, a Norfolk-based company founded in 2018, which makes software to better integrate robot technology. SVT Robotics works with numerous clients in Virginia and nationally. “A lot of people are nervous about robots taking jobs. But there are not enough people to fill the jobs. This is an absolute necessity.”

Turnover in warehousing, one of SVT Robotics’ main client sectors, has grown from about 40 percent in 2016 to nearly 60 percent in 2020, according to the U.S. Bureau of Labor Statistics. Warehousing is a major growth market because of a pandemic-fueled surge in e-commerce, Schultz says.

“There was a time when companies were asking, ‘Is there a return on investment to justify this robot?’ “ Schultz says. “Now companies are saying, ‘I can’t even operate unless I automate something. Automation is necessary to do my baseline.’ If you’re a company that isn’t considering how to automate in some way, you’re going to be in trouble.”

Robots are best suited for boring, repetitive jobs while humans still win in tasks and roles that require creativity, intuition and complex decision-making, Schultz says. Even seemingly mundane tasks such as grabbing a box from a shelf are surprisingly complex for a robot, he says.

That’s because humans naturally fill in the blanks required for tasks such as, “I need to start walking toward the shelf. I need to start looking for the box,” but robots must be told every single step. Despite some limitations, in a warehouse, a robot picker can do the work of five people, Schultz says.

The use of industrial robots worldwide nearly doubled since 2015, from 66 units per 10,000 workers to 126 robots per 10,000 employees, according to the 2021 World Robotics Report. The growth is showing no signs of slowing down. The global robotics market is predicted to grow up to 10 times—from about $25 billion in 2021 to between $160 billion and $260 billion in 2030, according to Boston Consulting Group (BCG).

The future for manufacturing hinges on digital/automation, but adding more robots puts pressure on manufacturers to retrain workers on the new technology, according to the 2021 Deloitte Global Resilience Report.

As demand for robots ramps up—doubling in the next two to three years –integrating robots into existing factories and warehouses will be challenging because the industry lacks sufficient, useful standards to make robots plug and play, Schultz says.

“You have to make robots work with everything else,” Schultz says. “It’s a challenging problem, technically and operationally. I could give you a million dollars worth of robots but if there’s no integration approach, these are abstract art.”

For comparison, Schultz says, think about the days before 1996 when USB (universal serial bus) standardized the ability plug in peripheral devices to a computer and led to many more devices that could easily be plugged in to a computer.

“Those days of floppy drives and cables are gone,” Schultz says. “USB is a protocol that says, ‘I don’t care what printer you have, what computer you are, who made the motherboard, who made the chip, whose operating system you have.’ USB works. We always talk to peripherals now in this way. Companies can now focus on innovating.”

“We do the same thing in the robotics space,” Schultz continues. “If you are a warehouse software program, we know you communicate in weird ways, but no matter how you communicate, by the time the communication hits the robot, it will always look the same way. You can rely on that standard.”

Integrating robots typically requires the ability to retrieve data from multiple sources and then sending data back to those sources—with each source being a unique piece of technology, software, standard and formatting, Schultz says.

“Everyone is arguing about who is going to be the first to change their standard,” he says. “There will invariably be misunderstandings among software engineers.”

The result often is a non-standard, orphan code applicable only in this one static situation, he says. “The thing that was supposed to save your business is now a prison,” he says. “This is one of the main reasons companies are terrified of implementing robots: they can’t afford to get it wrong.”

The industry also lacks enough people—software engineers, product managers and system designers—who know how to do integrate robots into a warehouse, Schultz says. “We can’t double the workforce who knows how to install robots in two years,” he says. “The only way to deal with this is technology.”

Such standardization in the computer industry with the USB (universal service bus) standard in 1996 for connecting outside devices to computers made computer use much easier, says Schultz. Earlier, adopting a standard voltage of 120 in 1984 in the United States led to an explosion of appliances, he says: “We do the same thing in the robotics space.”

Augmented reality (AR) is playing a larger role in training the military in Coastal Virginia and elsewhere, enabling personnel to get better training than from videos or books but yet remain with their units—saving money and reducing the spread of COVID.

Because of the pandemic, many training environments felt the need to offer training remotely via augmented reality and related modalities such as virtual reality (VR), says Nosika Fisher, director of research and development at Cape Henry Associates, a Virginia Beach-based company that provides training support to the military.

“A lot of educational training environments obviously were affected by COVID,” Fisher says. “In a classical type of classroom, you would take a unit or several military units that have a need for a particular specialty of training. There are travel costs and lodging costs. If someone has to travel, they’re not at their unit to help out.”

With books and training videos, “You’re not really doing much to force your brain to think critically,” Fisher says. “You hear it once, then forget it. With AR and VR, you’re forcing your brain to react to the training. You’re not talking theory. You’re partaking of an experience.”

Meantime, the cost of AR and VR headsets has gone down while quality of both headsets and memory chips has gotten better, she says. “AR and VR solve the issue of providing training at the point of need,” she explains. 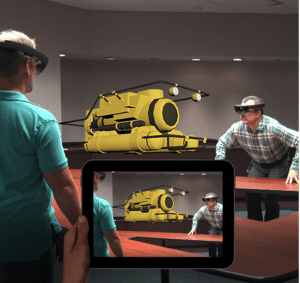 Beyond the pandemic, some parts and environments are often not available for training, too expensive to reproduce for training, and/or too dangerous, Fisher says. For example, Cape Henry Associates helps with training Navy personnel on maintenance for the weapons elevator on a ship, she says.

“We were able to put a 360-degree camera on there to take images, then overlay it with augmented reality checkpoints,” Fisher says. “The idea is for personnel to get the training before they are assigned to go on the ship.”

At Hampton University, students can take a course in gaming and virtual reality production in the new Augmented and Virtual Reality Lab in the Scripps Howard School of Journalism and Communications, says Willie Moore, the endowed professor teaching the course, now in its second year being offered.

Students can use their AR and VR skills in a number of careers including film, website design, real estate and reporting, Moore says.

“It’s all storytelling,” Moore says. “If a reporter is on the scene where there is a fire, the viewer could put a headset on and they’re looking at the fire instead of looking at it from a video.” 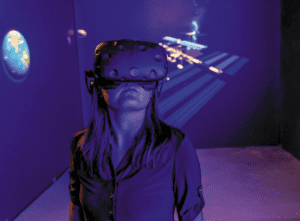 At ODU, students and professors can take advantage of a variety of opportunities in extended reality, says Megan Mize, director for ePortfolios and Digital Initiatives in the office of Academic Success Initiatives and Support.

Students in a game design course used an AR mobile app called Balanced Tower to explore how digital versions of analog games change players’ experience of those games. In another project, the video “The Party” attempts to illustrate the impact of autism on daily social activities, Mize says.

Worried that AR/VR technology is hard to learn? Don’t be.

“It’s a misconception that the technology is hard to learn,” Fisher says. “I’ve been present when we were showing it to folks who are not 18 years old. It’s quite simple. Once you put it on, you play around with it for five minutes and you’ve got it. Think about when the internet was new: learning how to browse through the web is harder to learn than learning this technology.”