Trending Now
Protecting Patient Data
Market Report: Health Care
How to Find Pandemic Relief with the Help...
Millennial Personal Appearance and the Law
Hacking is Becoming Less Human, More Robotic
Impacting the Workplace Loneliness Epidemic
Ransomware: What It Is, How to Avoid It...
Using Technology to Increase Employment Opportunities for Veterans
How Technology Has Caused a Shift in Marketing...
Out-of-Network Follies with Health Insurance
Business Profile

In 2014, 69-year-old Machipongo native Dixon Leatherbury was at a crossroads. He’d recently sold a chain of thriving agricultural equipment stores and his share of a 40-year-old, 1,000-plus-acre Eastern Shore farming operation. 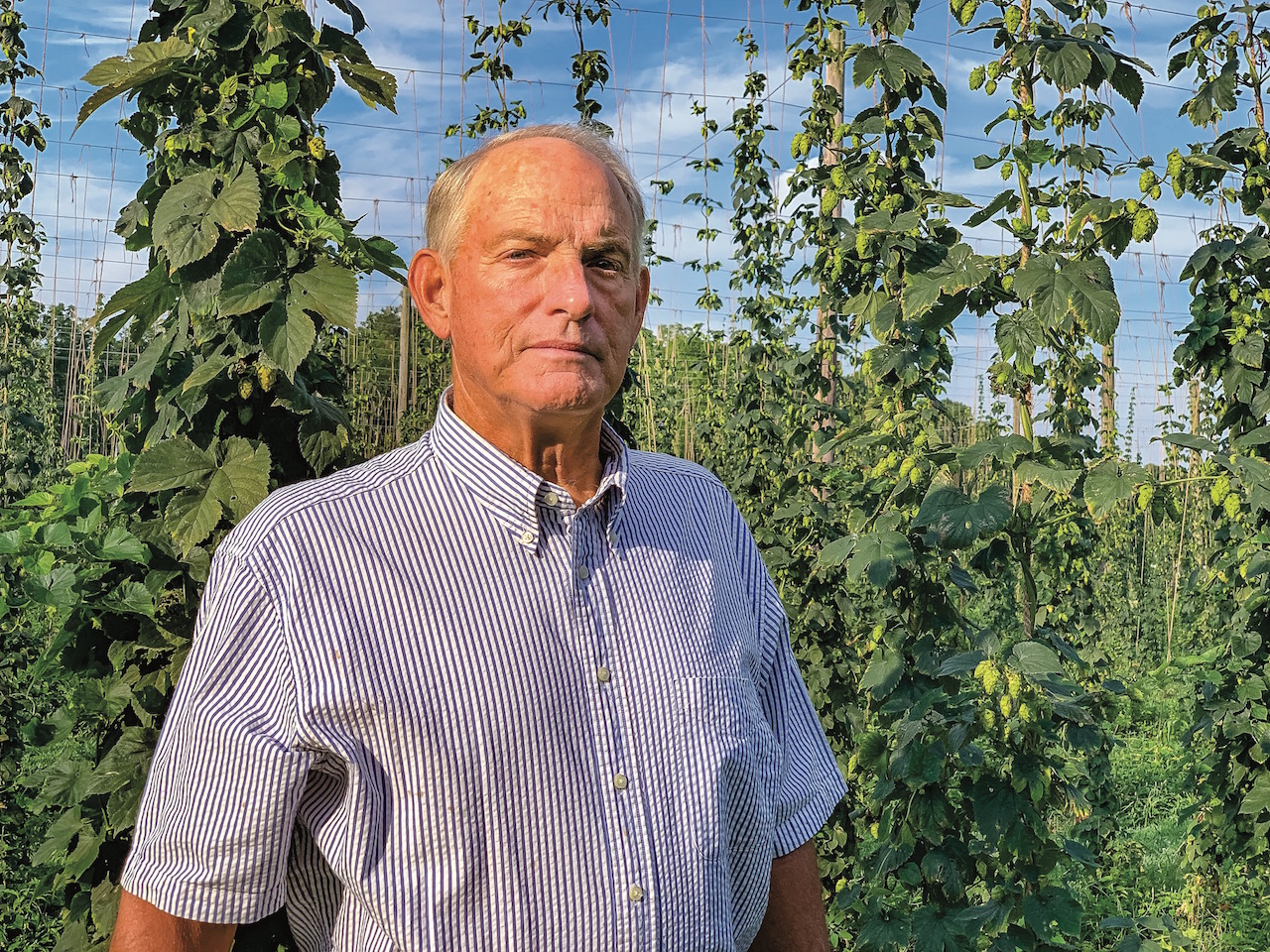 “But I’m not the kind of guy that’s content to just sit around twiddlin’ my thumbs,” says Leatherbury with a laugh. “I’d held on to a small irrigation business and about 10 acres of farmland. I figured I’d try something specialized [on the latter], but that’s as far as I’d got.”

Dining with his grown children at Richmond’s Legend Brewing Company, Leatherbury had an epiphany. Perusing the beer menu, he saw brews were made using regionally sourced malting barley. Though he’d often grown the crop for animal fodder, the names of the listed varieties were unfamiliar. Intrigued, Leatherbury inquired with the waitress. She returned with Head Brewmaster John Wampler.

“He pulled up a chair and we started talking barley,” says Leatherbury. Compared to traditional varieties, malting strains are finnicky. They require scrutiny and lots of hands-on management—especially around harvest. A veteran producer of specialty vegetables, Leatherbury was attracted by the challenge. “And I may as well confess: I’m a beer lover,” he adds. “I thought, ‘What could be cooler than hoisting a pint made from something I’ve grown?’”

By the end of the conversation, Leatherbury had decided to launch a beer-centered farming venture. The idea took an unexpected turn a few months later following a visit to Williamsburg’s Alewerks. There, he shared a pint with Brewmaster Geoff Logan.

“I told him what I planned to do, and he goes, ‘That’s great, but what we really need is hops,’” says Leatherbury. At the time, he knew little about the crop. “I asked [Geoff] to explain himself and basically got a history lesson.”

Beer has three primary ingredients: water, yeast and malted barley. However, the brews they produce tend to be lackluster and overly sweet; additional flavoring agents are needed. In the Middle Ages, brewers solved the problem with mixtures of local flowers and herbs known as “gruit.” By the 15th century, though, hops had revolutionized the craft: The flower clusters of the hemp-related climbing bine, Humulus lupulus, were found to do fantastic things for beer.

“They give it a bitterness when used early in the brewing process and aroma when added toward the end,” explains John Holl, author of Drink Beer, Think Beer. With more than 80 varieties in circulation, the delicate, bright-green cones can impart flavors ranging from tart, to piney, grassy, floral, citrusy and more. “As a bonus, they act as a natural preservative and extend the life of beer.”

Today, the blossoms have become the rock stars of American craft brewing ingredients. But for East Coast brewers looking to source close to home, there’s a catch. According to Holl, about 97 percent of all U.S. hops are grown in three states: Oregon, Idaho and Washington.

The shortage of supply has to do with climate and history.

“Hops prefer long, sunny days and cooler temperatures,” says Leatherbury. The commonwealth lies at the southernmost tip of the plant’s natural range. By comparison, Washington’s Yakima Valley—which, in 2014, accounted for 74 percent of U.S. hops production—averages an hour of additional sunlight per day. Though summer temperatures are similar, extreme highs are rare. “Those factors make a big difference in yield,” adds Leatherbury. “In terms of quantity, Virginia farmers simply can’t compete.”

Though New York was once the nation’s hops-growing capital, Prohibition pushed major growers to the Pacific Northwest. There, they reestablished hopyards and waited for legislation to change. When it did, national corporate brewers monopolized the market for 60-plus years. The East Coast hops industry remained virtually extinct until the craft beer revolution of the early 2000s.

There are now more than 200 breweries in Virginia alone. To stand out in a flooded market, brewers rely on specialty products. Similar to wines of geographical distinction, beer made from 100 percent local ingredients offers customers a unique terroir taste.

“But if I’m making beer with hops from Oregon, I can hardly call that local,” says Josh Chapman, owner and master brewer at Chincoteague’s Black Narrows Brewing. Because ‘mostly local’ isn’t as marketable, “Virginia-grown hops are in high demand.”

Subsequently, they often sell for far more than the national average of $15 per wet pound. Though statistics are lacking (just 20 farmers responded to Virginia Cooperative Extension questionnaires in 2018), it’s possible to produce 3,000 wet pounds of hops per acre.

But growing them brings a steep learning curve.

“It’s more akin to starting a vineyard than planting corn,” says Leatherbury. Startup costs are relatively high, while yields are almost nonexistent for the first few years. Bines require close attention—having no tendrils, the 20-foot creepers must be clipped to trellised support structures; similar to European grapevines, they are susceptible to catastrophic diseases like downy mildew. Flowers are delicate and require precise irrigation to protect against sun-stress. The flavorful chemicals in their cones are highly volatile and must be sold or processed within 48 hours of picking. For growers producing more than a quarter acre, mechanical processing equipment and refrigerated storage units are necessary—and expensive.

“But the hardest part is handling the sales,” confides Leatherbury. Virginia brewers typically use the hops for seasonal beers and therefore want them fresh. Short harvest windows and shelf life demands meticulous coordination. For growers, the goal is to sell the crop before picking. “And that requires a lot of relationship building,” says Leatherbury. Approaching harvest, “you’re in constant contact with your brewers. That way, they can prepare and have things ready to go on arrival.”

Most farmers are unwilling to deal with the hassle. But Leatherbury saw hops as a once-in-a-lifetime opportunity.

“Listening to Logan, [the Alewerks brewer,] I knew I was going to install a hopyard,” he says. “Back then, there were maybe a few dozen growers statewide, and most of them were very, very small. Here, hops were—” and essentially remain— “a Wild West-type industry. That excited me. I wanted to play a role in getting it off the ground and established.”

Toward that end, Leatherbury attended an educational seminar hosted by Virginia Tech, North Carolina State and Virginia State universities in 2014. There, he made connections with regional growers and agricultural extension agents. By the close of the following year, he’d installed a three-quarter-acre, 750-plant hopyard and sold his first crop—about 10 pounds—to Chesapeake’s Big Ugly Brewing. Seaside Hops was born. 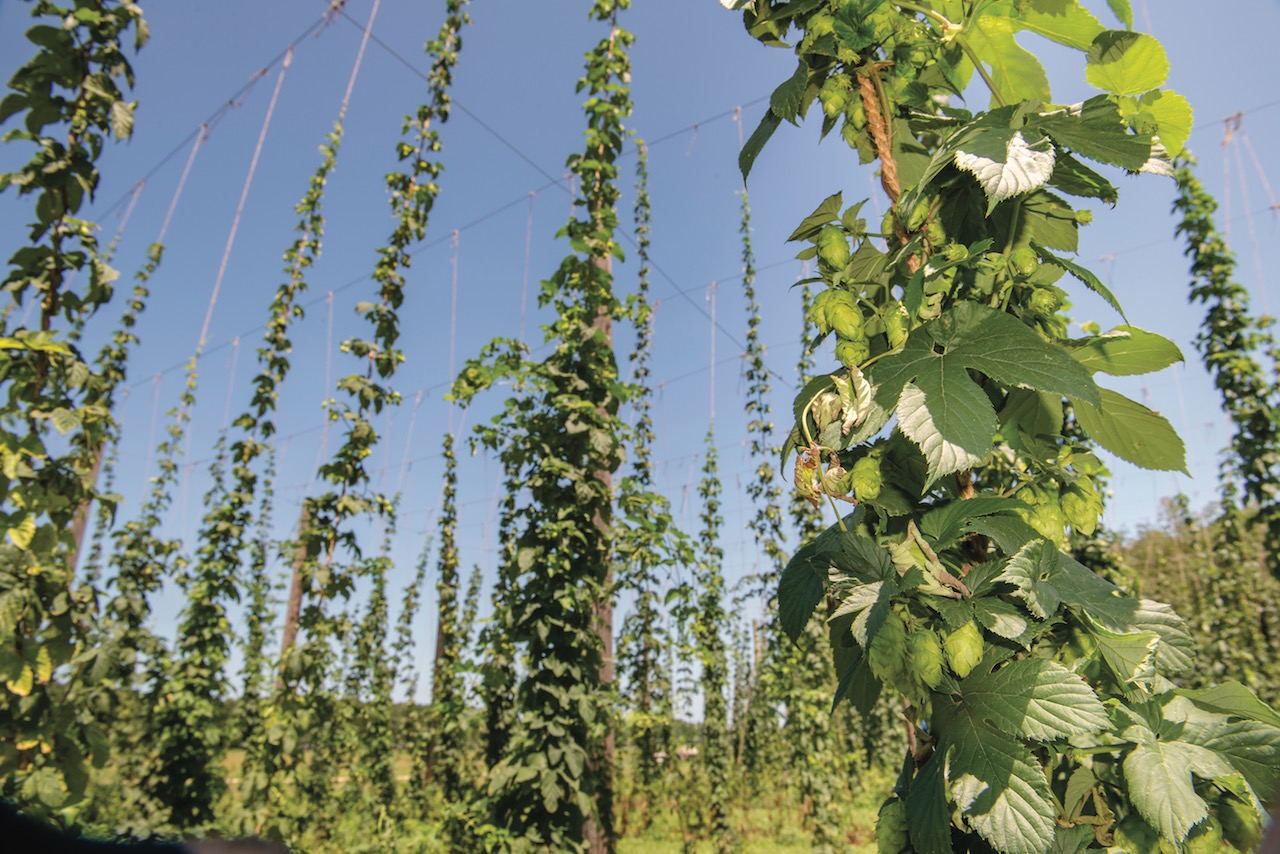 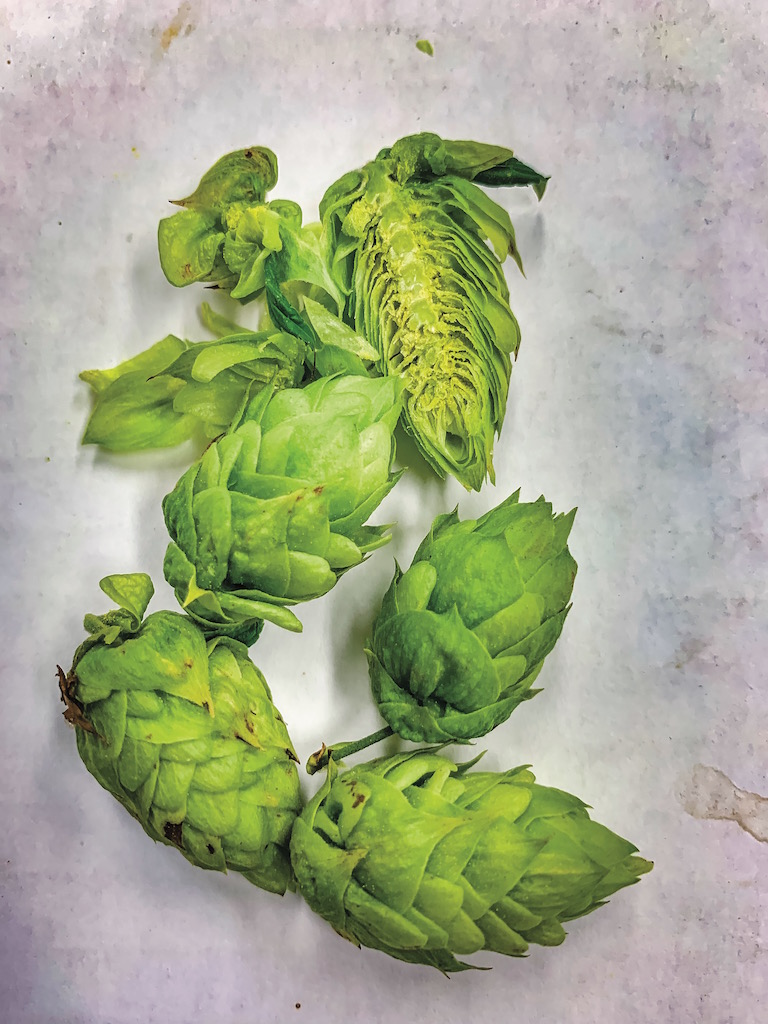 The business has since become one of the largest producers of hops in the Commonwealth. Leatherbury has expanded to grow 12 varieties on 3 acres and has more than 3,000 plants. He plans to add additional acreage year by year. Though the bulk of harvests goes to a trio of local breweries—Big Ugly, Black Narrows and the eponymous Cape Charles Brewery—the company has sold to many others, including Alewerks and Norfolk-based Rip Rap and Coelacanth.

But Leatherbury is more than a producer. Working with connections from the farm equipment industry, he developed—and recently patented—affordable, automated harvesting equipment catered to the needs of small-scale producers. In 2018, he was elected president of the Old Dominion Hops Cooperative, a farming cooperative consisting of about 100 growers in Maryland, Virginia and North Carolina. In that capacity, he’s worked to connect brewers and commercial farmers and lobbied for the creation of state-funded university research and breeding programs.

“For this industry to reach its true potential, we need a couple of things,” says Leatherbury. First comes varieties better suited to the region’s climate. Second, research concerning the terroir. “Every brewer I sell to tells me my hops taste better than what they’re getting out west,” says Leatherbury. While western farmers benefit from bigger yields, “it appears we’re growing a higher-quality taste product. We need scientific research to substantiate those claims and help us exploit what we’re already seeing happening on the ground.”

Randy Green owns Green Diamond Hopyard and co-founded the Hops Cooperative (originally as a club) in 2005. He sees a future where beers brewed in Virginia feature 100 percent locally grown hops.

“I’ve watched an obscure hobby blossom into a viable new industry,” he says. “Right now, we’re poised on the brink of a boom. And Dixon is at the forefront of making it happen.”